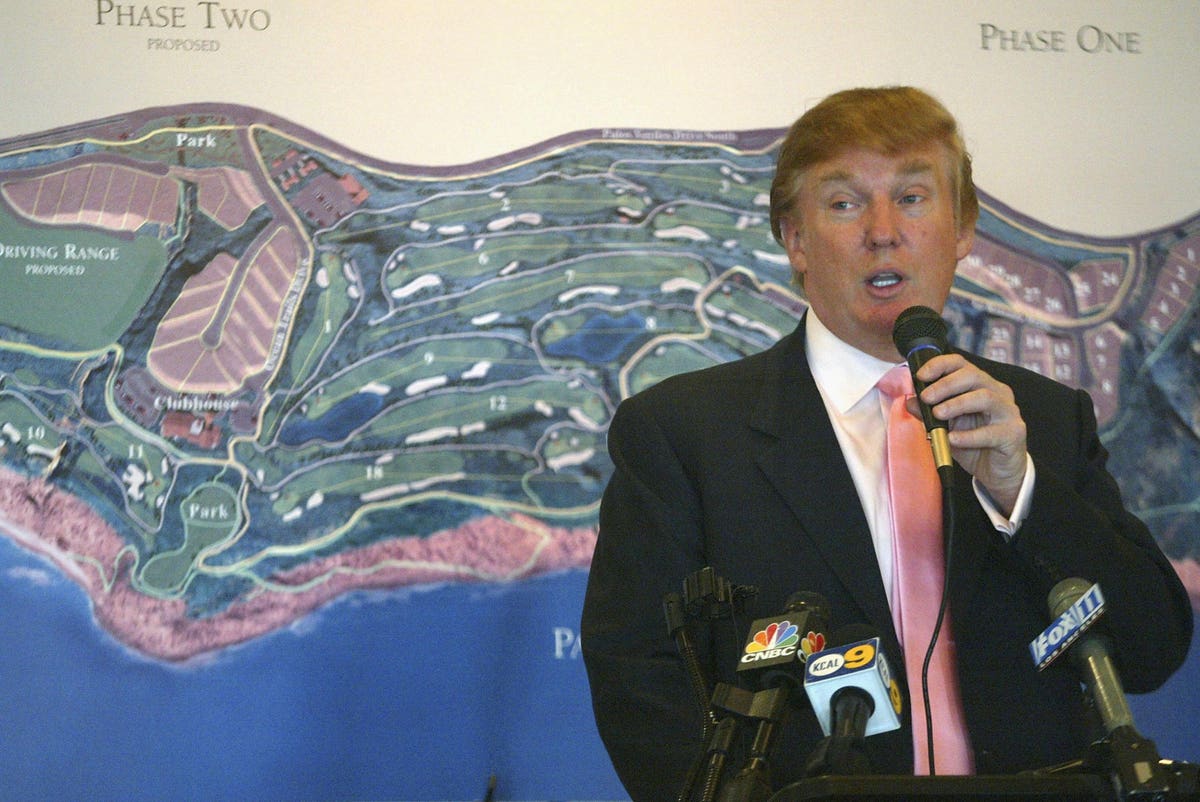 The New York attorney general is investigating the former president for manipulating the value of his properties in ways that benefit him. It’s something we’re familiar with at Forbes, because Trump tried to mislead us about his financial information for decades. This is the third in a series of stories digging deeper into the numbers.

igh on a cliff overlooking the Pacific Ocean sits a patch of land offering 18 award-winning holes of golf, a cluster of multimillion-dollar mansions—and a potential headache for its developer, Donald Trump.

New York Attorney General Letitia James is investigating Trump’s dealings at the property, called Trump National Golf Club Los Angeles, as part of her probe into whether Trump exaggerated the value of his holdings to his lenders, insurers and the Internal Revenue Service.

One of James’ claims: that Trump valued unsold lots at the property at $4.5 million, even after getting an appraisal valuing lots there at $1.1 million.

That’s not surprising, given what Trump claimed to Forbes over the years. Trump bought the 261-acre property for a reported $27 million in 2002, after a landslide wiped out part of the golf course and the previous owners declared bankruptcy. He had big plans to rebuild the course and surround it with mansions. In 2005, Trump said he had 75 lots at the property and planned to sell 75 homes on them for $10 million each. By 2009, things were going so well at Trump Los Angeles—despite the nationwide real estate crash—that Trump’s chief financial officer, Allen Weisselberg, said buyers were snapping up houses for around $10 million and empty lots for $8 million. Later that year, a mega deal: Weisselberg revealed Trump had sold a home there for $28 million.

Except most of that didn’t happen. Trump didn’t really have 75 lots—he had 36, plus two other tracts of land that had yet to be approved for development. One of those tracts is still stuck in the approval process, two decades after Trump bought the property. The second is now a driving range—and a subject of James’ investigation.

And those supposed sales? Lot buyers were never shelling out $8 million—or anything close to it—according to an analysis of property records. Trump offloaded two of his best lots for about $4 million each in 2007, near the height of the real estate bubble, but didn’t sell the rest until years later, collecting less than $2 million apiece for most of them. There was no $28 million mega home sale either. Property records show Trump built and sold a half dozen houses at Trump Los Angeles, including four for between $3.2 million and $4.2 million and one for $7.2 million. His biggest sale, by far: When billionaire Phil Ruffin, Trump’s close friend and business partner, laid out $12.5 million for a mansion to kickoff sales at the property in 2006. Ruffin sold the place nine years later, taking a $5.8 million loss.

The Trump Organization did not respond to a request for comment for this story. Trump has filed suit against the New York attorney general and has criticized her investigation as a partisan witch hunt. (James is a Democrat who is running for reelection after a brief campaign for New York governor.)

The lies extended beyond Forbes, apparently to Trump’s lenders and insurers, who received personal balance sheets from the Trump Organization. According to the New York attorney general, Trump’s 2012 balance sheet valued lots at the property at $4.5 million apiece, even though a Trump-commissioned appraisal had valued lots at a quarter of that price. In fact, Trump was never able to sell a single lot—not even one of his biggest parcels with the best ocean views—for $4.5 million, according to property records. The average sale price for a Trump Los Angeles lot: $1.9 million.

He also seems to have misled lenders and insurers about how many lots he had. A note accompanying Trump’s 2012 balance sheet, submitted to Congress in 2019 by former Trump lawyer Michael Cohen, says the club is “presently zoned for 75 home sites,” including “52 home sites available for sale” as of June 2012—no mention that more than half the property’s lots were actually years away from being approved for sale, or that 16 of them were currently being used as a driving range with little chance of ever being converted into homes. The real numbers, according to the records: Trump had about 30 sites available for sale at the time, including two completed homes that had failed to sell for years.

It’s the patch of 16 lots that Trump never tried to sell that has become a major focus of James’ investigation. Trump spent years fighting for approval to build homes on the parcel, which was considered at risk of another landslide. In the meantime, he got permission to use the area as his golf course’s driving range and putting green.

It would likely take years, and millions of dollars, to make the land safe enough to be approved for home development. So, Trump came up with a different way to cash in on his troubled piece of land: He used it to cut his tax bill. In 2014, he struck a deal with a local land conservancy. Trump donated a conservation easement over the tract, promising to keep it as green space instead of trying to turn it into homes. In exchange, he could deduct the value of the gift—which he had appraised at $25 million—on his taxes. Another perk: He got to keep using the property as a driving range for his paying customers. A good deal, even if the optics made his lawyer nervous.

“Some could argue that as long as he is operating the golf course, he would continue to keep the driving range,” Trump attorney Sheri Dillon wrote at the time, in an internal email obtained by James. “Effectively, the US taxpayers are paying him to do exactly what he would already do anyway.”

The New York attorney general, meanwhile, is taking aim at a different aspect of the deal: how Trump arrived at $25 million for the value of his “gift.” The higher the value of the land Trump agreed not to develop, the more he could deduct on his taxes. According to James, the Trump Organization and the appraisers it hired used a number of tactics to inflate their estimate, including downplaying the time and cost required to make the lots safe and lowballing the value of Trump keeping the driving range.

According to court filings, Trump submitted the questionable appraisal to the IRS and got more than $5 million in federal tax benefits between 2014 and 2018, thanks to the conservation easement at Trump Los Angeles and a similar agreement Trump made at a property he owns in New York state.

“Trump,” one appraiser wrote to another, according to the court filings, “is fighting for every $1.”