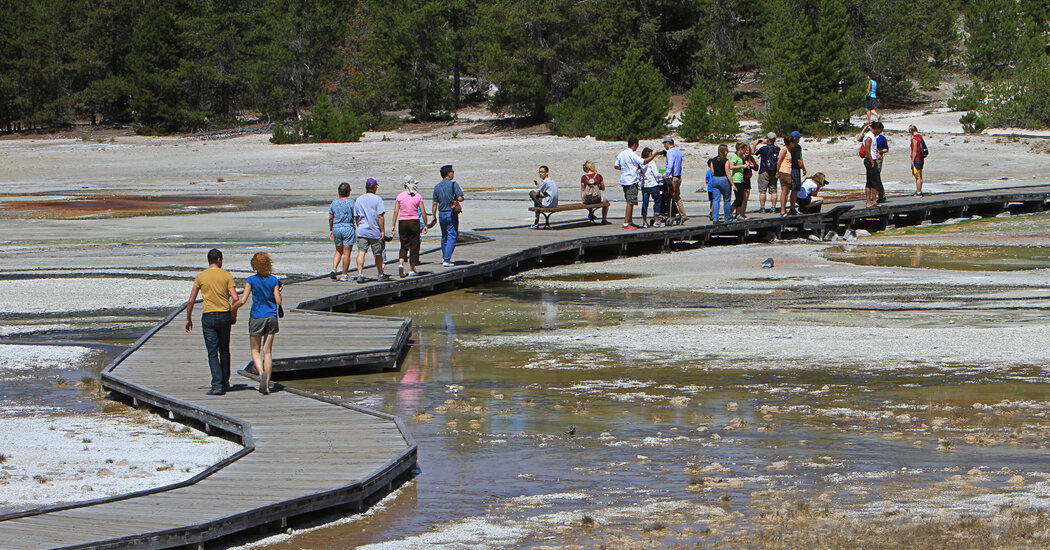 A Connecticut woman was sentenced to seven days in jail for walking on the thermal grounds at Yellowstone National Park, an act the authorities described as extremely dangerous.

The woman, Madeline Casey, 26, was sentenced on Aug. 18, according to a statement from the U.S. Attorney’s Office for the District of Wyoming. She was charged with traveling in the thermal areas and disorderly conduct, according to court records.

Ms. Casey and two others with her, who were not identified in the statement, made their way to a thermal pool and geyser at Norris Geyser Basin, one of the largest thermal areas at Yellowstone, after they left the marked boardwalk during a visit last month, the authorities said.

Worried onlookers took photos and videos of the three people as they walked over the thermal ground, the statement said.

“The ground is fragile and thin, and scalding water just below the surface can cause severe or fatal burns,” said Morgan Warthin, a Yellowstone National Park spokeswoman. “More than 20 people have died from burns suffered after they entered or fell into Yellowstone’s hot springs.”

The authorities said the park does a “darn good job” of warning people to stay on the boardwalk and trails in thermal areas and educating them about the unstable ground, boiling water and scalding mud.

“Yet there will always be those like Ms. Casey who don’t get it,” Bob Murray, the acting U.S. attorney, said in the statement. “Although a criminal prosecution and jail time may seem harsh, it’s better than spending time in a hospital’s burn unit.”

A woman visited Yellowstone last year while it was closed because of the pandemic and sustained serious burns when she fell into a hot spring or a steam vent while she was taking photos, The Associated Press reported.

The park’s thermal features include hot springs, geysers, steam vents and mud pots. Last fall, The A.P. reported, a man walking off a boardwalk fell into a hot spring and also sustained serious burns. In 2016, a 23-year-old man fell into an acidic mud pot and died.

A man who was cited for walking in a thermal area around the same time as Ms. Casey, and whose fine was later dismissed, said on Friday that he hadn’t seen the signs warning people not to enter the thermal area because they were too low to the ground.

“I just wanted to see where the steam was rising and get a picture,” said the man, Floyd K. Parham. “Once I got the picture, I went back to my truck, but they said I had passed through the thermal area.”

According to the National Park Service website, the Norris Geyser Basin is the hottest and oldest of Yellowstone’s thermal areas. Evidence suggests that Norris has had thermal features for at least 115,000 years, and very few of them are below the boiling point of water.

In addition to the jail time, Ms. Casey was ordered to pay a $1,000 fine, a $1,000 community service payment to the Yellowstone Forever Geological Resource Fund, and $40 in fees.

It was not immediately clear why Ms. Casey had been singled out in the statement by federal prosecutors. It was also unclear whether charges had been filed against the two others who were with her.

Messages left for Yellowstone and the U.S. Attorney’s Office on Friday were not immediately returned.