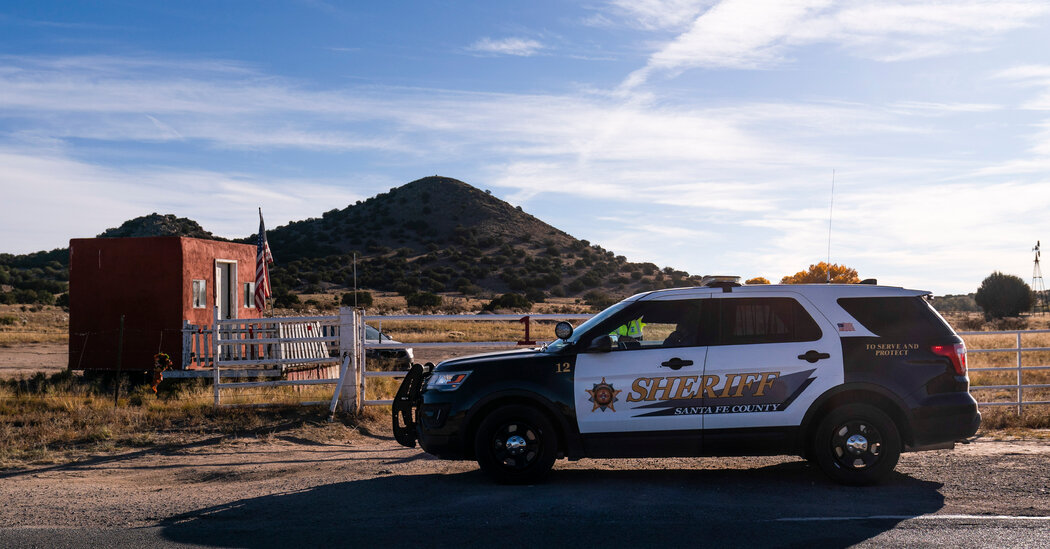 SANTA FE, N.M. — The Santa Fe County district attorney said on Tuesday that she was not ruling out criminal charges in last week’s fatal shooting on a film set. The actor Alec Baldwin was rehearsing with a gun that he had been told did not contain live ammunition when it went off, killing the film’s cinematographer and wounding its director.

“We haven’t ruled out anything,” the district attorney, Mary Carmack-Altwies, said in a telephone interview. “Everything at this point, including criminal charges, is on the table.”

Ms. Carmack-Altwies said that the investigation was focusing on ballistics in an effort to determine what kind of round was in the gun that killed Halyna Hutchins, the cinematographer — and who had placed the ammunition in the gun.

“There were an enormous amount of bullets on this set, and we need to find out what kinds they were,” Ms. Carmack-Altwies said. Detectives said that they recovered three revolvers, spent casings and ammunition — in boxes, loose and in a fanny pack — while executing a search warrant on the set, according to an inventory of the items released on Monday. The inventory did not specify what kind of ammunition was found on the set.

Ms. Carmack-Altwies took issue with descriptions of the firearm used in the incident as “prop-gun,” saying that the terminology, which is used in some of the court documents related to the case, could give the misleading impression that it was not a real gun.

“It was a legit gun,” she said, without naming specifically what kind of firearm was used. “It was an antique-era appropriate gun.”

Detectives from the Santa Fe County Sheriff’s Office are proceeding carefully with the investigation, she said, citing the large number of witnesses and the need to methodically collect ballistics and forensics evidence.

What Happened on the Set of “Rust”

The shooting occurred on Thursday on the set of a church where Mr. Baldwin was rehearsing a scene for “Rust,” a Western where he plays an outlaw. According to affidavits included in applications for search warrants, Dave Halls, an assistant director on the set, had gone outside the church and taken the gun off a cart, where it had been placed by the film’s armorer, Hannah Gutierrez-Reed. Mr. Halls handed the gun to Mr. Baldwin, who was rehearsing inside the church, according to the affidavit, and said it was a “cold gun,” indicating that it contained no live rounds and was safe for Mr. Baldwin to handle.

Mr. Baldwin then rehearsed a scene that involved “cross drawing” a revolver and pointing it toward the camera lens, according to the affidavit, when the gun fired — striking Ms. Hutchins in the chest and killing her, and hitting the director of the film, Joel Souza, in the shoulder, wounding him.

Detectives are still interviewing people who were on the set, Ms. Carmack-Altwies said. “It’s probably weeks, if not months, of follow-up investigation that we’re going to need to get to the point of charging.”

Ms. Carmack-Altwies said that she was aware of news reports suggesting that crew members had used guns with live ammunition for target practice hours before the fatal shooting, but said that the reports were “unconfirmed.”

Mamie Mitchell, the script supervisor who called 911 after the shooting, has hired Gloria Allred as her lawyer, according to a statement from Ms. Allred. The statement said they would be conducting their own investigation into the incident “because there are many unanswered questions.”

Ms. Carmack-Altwies, who is expected to speak with reporters on Wednesday morning at a news conference along with Sheriff Adan Mendoza, of Santa Fe County, said that this incident figured among the most challenging cases in Santa Fe County in recent memory.

“We have complex cases all the time,” she said. “But this kind of complex case, with these kinds of prominent people, no.”