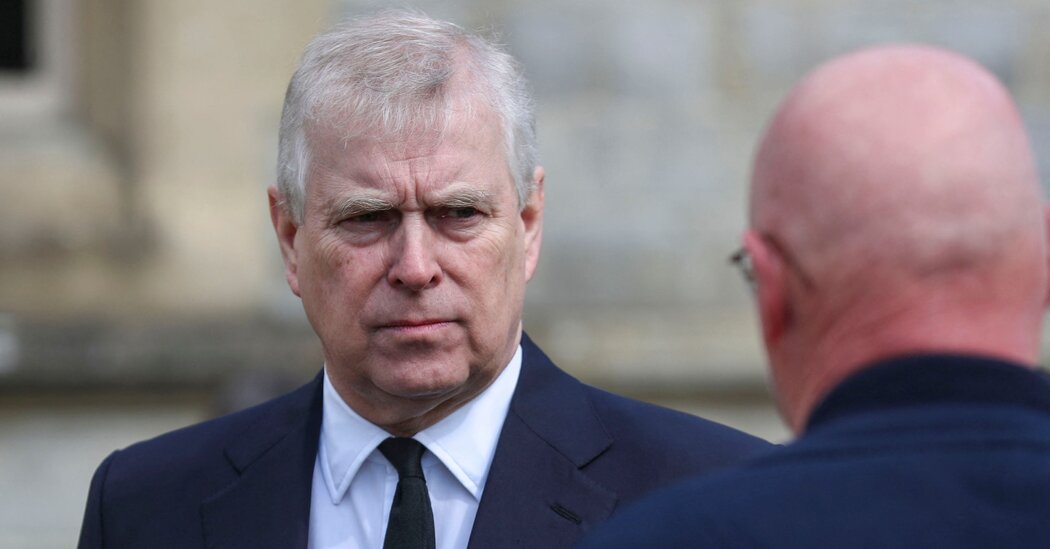 A woman who is among Jeffrey Epstein’s most vocal accusers received $500,000 in 2009 to resolve a lawsuit in which she accused him of repeatedly sexually abusing her when she was a teenager, according to a settlement agreement unsealed on Monday.

The agreement was made public as part of a lawsuit filed by the woman, Virginia Roberts Giuffre, against Prince Andrew, who was friendly with Mr. Epstein and who Ms. Giuffre has said raped her when she was 17.

Prince Andrew, the second son of Queen Elizabeth II, has denied Ms. Giuffre’s allegations, and his lawyers are expected to argue at a hearing on Tuesday that her suit, which was filed in federal court in Manhattan, should be dismissed.

Andrew B. Brettler, a lawyer for Prince Andrew, declined to comment on the terms of the 2009 settlement or its potential ramifications for Ms. Giuffre’s lawsuit against his client.

Ms. Giuffre says in the suit that she was trafficked and abused by Mr. Epstein and others in his circle, including Prince Andrew, the Duke of York, starting when she was 16.

The prince, 61, was a friend of Ghislaine Maxwell, a British socialite and longtime companion of Mr. Epstein’s who was convicted last week of conspiring with him to recruit, groom and sexually abuse underage girls.

After days of deliberation, a jury found Ms. Maxwell guilty of all but one charge in the sex trafficking case against her.

Ms. Giuffre’s suit against Prince Andrew, which seeks unspecified damages, accuses him of abusing her “at Epstein and Maxwell’s invitation” in New York. She says the prince also abused her in London and on an island Mr. Epstein owned in the U.S. Virgin Islands. Ms. Giuffre did not testify at Ms. Maxwell’s trial.

Prince Andrew’s lawyers have argued that Ms. Giuffre’s suit against him is invalid, in part because of her 2009 settlement with Mr. Epstein. In addition to the sum she received, the filing unsealed on Monday shows her agreeing to drop claims against Mr. Epstein and anyone else “who could have been included as a potential defendant.”

In a statement on Monday, David Boies, a lawyer for Ms. Giuffre, said the details of the 2009 agreement were “irrelevant to Ms. Giuffre’s claim against Prince Andrew.” The settlement, Mr. Boies said, did not mention the prince by name and he “did not even know about it.”

Prince Andrew “could not have been a ‘potential defendant’ in the settled case against Jeffrey Epstein both because he was not subject to jurisdiction in Florida and because the Florida case involved federal claims to which he was not a part,” Mr. Boies said.

Mr. Boies said that he and Ms. Giuffre’s other lawyers had sought the public release of the settlement filing to rebut claims made by Prince Andrew’s legal team. The prince’s lawyers have argued that Ms. Giuffre was seeking a “payday” by suing him.

A fund created by Mr. Epstein’s estate to compensate his victims has paid out at least $121 million to more than 135 people.

Ms. Giuffre, who now runs a nonprofit group called Speak Out, Act, Reclaim, filed her suit against Prince Andrew almost exactly two years after Mr. Epstein killed himself in a federal jail in Manhattan while awaiting trial on sex-trafficking and conspiracy charges. He had been accused of sexually exploiting dozens of women and girls at his various homes.

Prince Andrew had stepped back from public life in 2019 after a disastrous interview with the BBC about his links to Mr. Epstein. Ms. Giuffre’s suit, which included a picture of her and the prince together, undermined his assertion in the interview that he could not recall meeting her.

The continuing questions about Prince Andrew’s conduct come at a difficult time for Britain’s royal family, which has endured a public rift within its ranks and is confronting worries about the health of Queen Elizabeth, 95, after the 2021 death of her husband, Prince Philip.

Britain’s tabloid newspapers have seized on tensions within the royal household that were exposed in a series of interviews in which Prince Harry and his wife, Meghan, described royal life as a kind of gilded prison and said that family members held retrograde views on race.

Toward the end of last year, the queen canceled some engagements because of concerns over her health, but she did deliver her annual televised Christmas message. She made no mention of either Prince Harry’s decision to step down from duties as a senior member of the royal family or Prince Andrew’s legal battle.