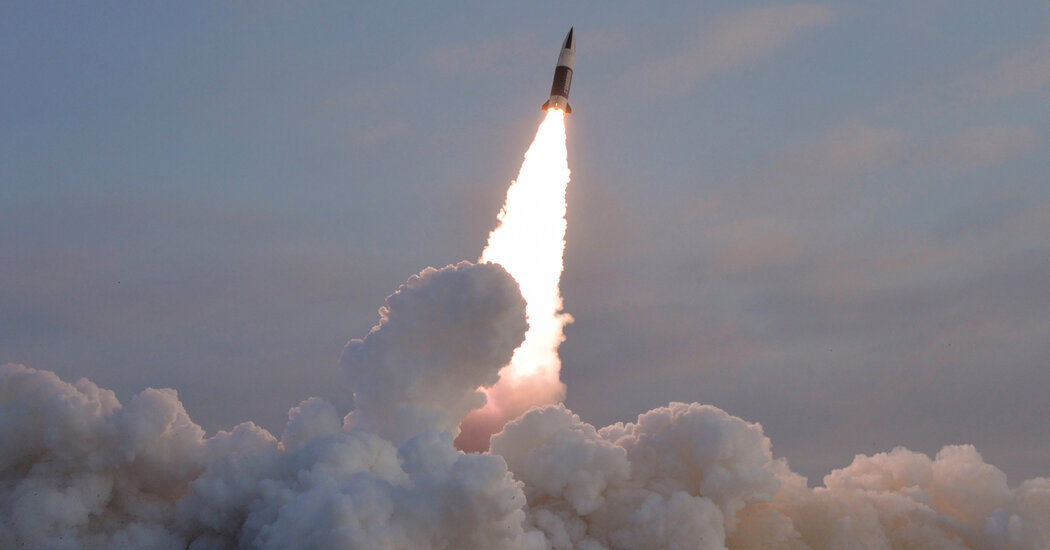 SEOUL — North Korea began the new year by convening a meeting for the ruling Workers’ Party during which very little was said about the United States. That ominous silence didn’t last long.

Kim Jong-un, the country’s ruler, has launched six ballistic missiles in four weapons tests since Jan. 5, almost as many missiles​ in one month​ as North Korea launched in all of last year. On Tuesday, the South Korean military confirmed that the North had fired two cruise missiles in its fifth test of 2022.

The message was clear: The North Korean leader feels he is being ignored and wants to push the Biden administration to re-engage and pay attention to his economically ailing nation.

Individually, the tests may not amount to much — they involved missiles that have already been tested or weapons that are still under development. But taken together, they signal that Mr. Kim plans to use 2022 to jolt the Biden administration out of its diplomatic slumber.

Mr. Kim needs Washington to engage ​with him on economic concessions​ so that he can fix his country’s devastated economy. Over the years, he has learned that the best way to grab the attention of an American president is with weapons. And that the best time to do it is when the world can least afford the instability.

According to that playbook, 2022 looks like a promising year.

China is busy preparing for the Beijing Olympics next month. South Korea elects a new president in March. Russia has hinted at a potential invasion of Ukraine, keeping the Biden administration on tenterhooks.

During a Politburo meeting last Wednesday, Mr. Kim suggested that his government might once again begin testing long-range missiles and nuclear devices after suspending such tests before his 2018 summit meeting with President Donald J. Trump.

“2022 calls for continued saber-rattling, punctuated by some major missile tests,” said Lee Sung-yoon, a North Korea expert at the Fletcher School at Tufts University. “Kim’s goal is to routinize short-range ballistic missile flights as a fact of life without any repercussions, after which he will move on to bigger provocations by resuming intermediate- and long-range missile tests punctuated by a nuclear test, as he did in 2017.”

That year, North Korea tested what it called a hydrogen bomb and also launched three intercontinental ballistic missiles. It was also the year Mr. Trump took office after a vicious campaign in the United States. South Korea had just impeached its president.

Wednesday was the second time ​Mr. Kim threatened to lift the moratorium on long-range missile and nuclear tests. After his diplomacy with Mr. Trump ended without an agreement in 2019, he said he no longer felt bound by the commitment. ​But he did not follow through with any such tests, and his country was soon plunged into the chaos of the coronavirus pandemic.

This year ​also marks the beginning of Mr. Kim’s second decade in power, and a chance for him to reassert his authority.

Ever since taking over, he has focused on building the country’s arsenal to validate his family’s dynastic rule, calling his nuclear weapons a “treasured sword” that protects North Korea against foreign invasion.

During the meeting on Wednesday, he urged North Koreans to celebrate the 80th anniversary of the birth of his father​ and predecessor, Kim Jong-il, in February, as well as the 110th birthday of his grandfather, Kim Il-sung, in April.

Under his father and grandfather, North Korea had seemed open to shelving its nuclear ambitions. But those hopes have dissipated under Mr. Kim, who has rapidly expanded the country’s nuclear program, even as the United Nations piled on sanctions.

Though ​Mr. Kim has often been depicted abroad as a leader ​potentially capable of opening up his isolated country for the sake of economic development, his nuclear weapons are, as North Korea has put it, “not a bargaining chip.”

Rather, the country sees them as tools​ to bring Washington to the negotiating table. And by that logic, the more powerful the arsenal, the more leverage Mr. Kim has.

Even when he ​vowed to focus on economic development in 2013, Mr. Kim stuck to his “parallel” goal of strengthening his nuclear force. The country has conducted more than 130 missile tests under him, compared with a total of 16 tests under his father and 15 under his grandfather. The last four of the North’s six nuclear tests all took place under his watch.

“By advancing its nuclear capabilities and weapons systems, North Korea is showing the United States and South Korea that the more time passes, ​the bigger the price ​will become that they have to pay,” Choi Yong-hwan, an analyst at the Institute for National Security Strategy​ in Seoul, wrote in a recent policy paper.

Yet try as it may to flex its power, North Korea appears to be low on the Biden administration’s list of international priorities​​.

Washington has taken no steps to entice Mr. Kim, except to propose talks “without preconditions,” ​a lukewarm entreaty that North Korea has rebuffed.

But it has not resumed tests of intercontinental ballistic missiles. Instead, North Korea has focused on testing missiles that can carry what it calls “smaller, lighter and tactical” nuclear weapons. ​These kinds of weapons do not pose a direct threat to the United States, but they could boost Mr. Kim’s leverage with Washington by placing American allies such as South Korea and Japan under nuclear threat.

An escalation. North Korea started a new round of testing in September​ after a six-month hiatus. It has since completed several missile tests, including the firing of two ballistic missiles on Jan. 14, that violated the 2017 U.N. resolutions.

In North Korea’s first two tests this month, the country launched short-range ballistic missiles with what it called “hypersonic gliding vehicles,” detachable warheads that ​make the weapons harder to intercept because they ​not only fly extremely fast but also change course during flight.

In a test on Jan. 13, North Korea launched the KN-23, one of three new solid-fuel ballistic missiles the North has been testing since 2019.

Solid-fuel missiles are easier to transport and launch. The KN-23 can perform low-altitude maneuvers, making them harder to intercept. North Korea has also begun launching KN-23 variants from a submarine, as it did in October, and from trains, as it did in September and again this month.

In its most recent test, North Korea fired a pair of solid-fuel missiles from a mobile launcher vehicle. When the North first launched such a pair in 2019, there was a 16-minute interval between the two missiles fired.

That gap was reduced to four minutes in the recent test, indicating that the military has improved its ability to fire multiple missiles and hide them from counterattacks by the United States and South Korea.

“North Korea hopes that if it continues to demonstrate its nuclear capabilities but confines them to the Korean Peninsula, it will not aggravate public opinion in the United States and will strengthen voices there calling for a compromise,” Cha Du-hyeogn, a principal fellow at the Seoul-based Asan Institute for Policy Studies, wrote in a recent paper.

For that strategy to work, Mr. Kim will need continued help from China in resisting any new international sanctions. North Korea’s economic challenges were deepened two years ago when it shut its border with China to fight the pandemic. This month, Beijing confirmed that “through friendly consultations,” China and North Korea reopened their border for freight trains.

“This timing suggests Beijing is more than complicit with Pyongyang’s provocations,” said Leif-Eric Easley, a professor of international studies at Ewha Womans University in Seoul. “China is supporting North Korea economically and coordinating with it militarily.”