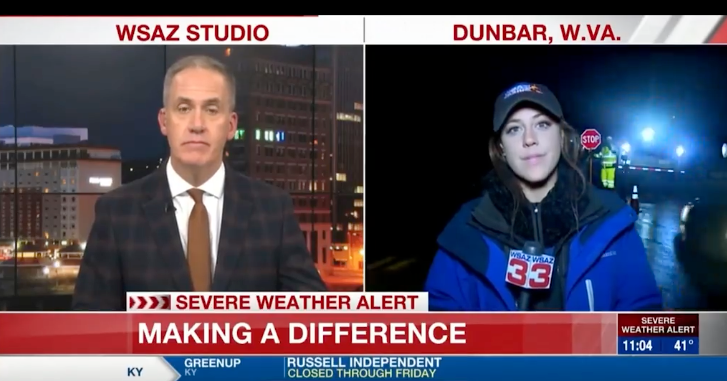 “I would really like to see the industry cut back on the number of one-man-band-type of live shots because it is hard to be situationally aware, but I just don’t know whether it would have made a difference in this case,” he said.

Professor Tuggle, who did “one-man band” shots in the 1980s, said that if someone had been with Ms. Yorgey, she still could have been hit by the car because it came from outside the shot.

Whoever assigned the story could have decided the water main break was not a significant enough story to warrant sending out a young reporter on her own late at night, he said. The newsroom could also have provided a reflective jacket or told her to stand farther from the road than she might have thought necessary, he said.

Representatives for WSAZ and the company that owns the station, Gray Television Broadcasting, did not respond to requests for comment on Thursday. Ms. Yorgey, who is starting a job at WTAE-TV in Pittsburgh next month, also did not respond to interview requests.

The controversy was all too familiar to Alanna Autler, 31, who worked as a multimedia journalist for another news station in Charleston years ago. Ms. Autler said she would sometimes enlist help from friends, colleagues and even strangers to feel more secure as she reported from the scene of a crime or natural disaster.

Ms. Autler said managers had on occasion acknowledged that she was being sent to an unsafe location, but there was no one else around to go with or instead of her. “If you’re the lead story, or the only story, because you are the only reporter, then you feel pressure that the entire newscast falls because of you,” she said.

Once, after being asked to cover a rape for an 11 p.m. broadcast, Ms. Autler told her managers she was scared to go by herself, but they did not provide support. She asked her then-boyfriend’s cousin to ride with her in the news van.