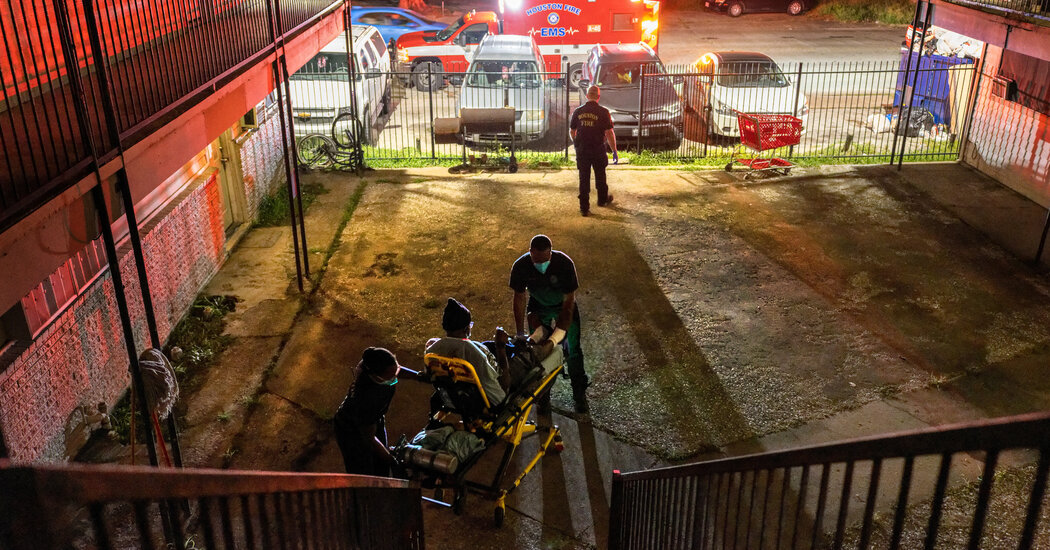 The daily average for hospitalized Covid-19 patients in the United States is now more than 100,000 over the last week. That average is higher than in any previous surge except last winter’s, before most Americans were eligible to get vaccinated.

The influx of patients is straining hospitals and pushing health care workers to the brink as deaths have risen to an average of more than 1,000 a day for the first time since March. The seven-day average of Covid hospitalizations peaked in mid-January with nearly 140,000 people hospitalized.

Hospitalizations nationwide have increased by nearly 500 percent in the past two months, particularly across Southern states, where I.C.U. beds are filling up, a crisis fueled by some of the country’s lowest vaccination rates and widespread political opposition to public health measures like mask requirements.

In Florida, 16,457 people are hospitalized, the most of any state, followed by Texas, according to data from the U.S. Department of Health and Human Services.

This month, one in five American I.C.U.s had reached or exceeded 95 percent of beds full. Alabama was one of the first states to run out, and the crisis is concentrated in the South, with small pockets of high occupancy elsewhere in the country. As cases and hospitalizations surged, the University of Tennessee Medical Center in Knoxville on Thursday requested assistance from the National Guard.

“I’ve never seen anything quite like it,” said Dr. Shannon Byrd, a pulmonologist in Knoxville, who described local hospitals filled to capacity, noting that the vast majority of I.C.U. patients in the region were unvaccinated. “It’s bringing whole families down and tearing families apart. They’re dying in droves and leaving surviving loved ones with a lot of funerals to go to.”

As in previous surges, hospitals have been forced to expand capacity by creating makeshift I.C.U.s in areas typically reserved for other types of care, and even in hallways or spare rooms. Experts say maintaining existing standards of care for the sickest patients may be difficult or impossible at hospitals with more than 95 percent I.C.U. occupancy.

Hard-hit communities in Oregon and elsewhere are asking for mobile morgues to store the dead.

Like many health care workers, Dr. Babar voiced frustration at the refusal of many residents to get inoculated, even after they had lost an unvaccinated family member to the virus.

“The families, you don’t see them going out and talking about the benefits of vaccine,” he said. “Nobody brings it up, nobody expresses any remorse. It’s just something that they absolutely do not believe in.”