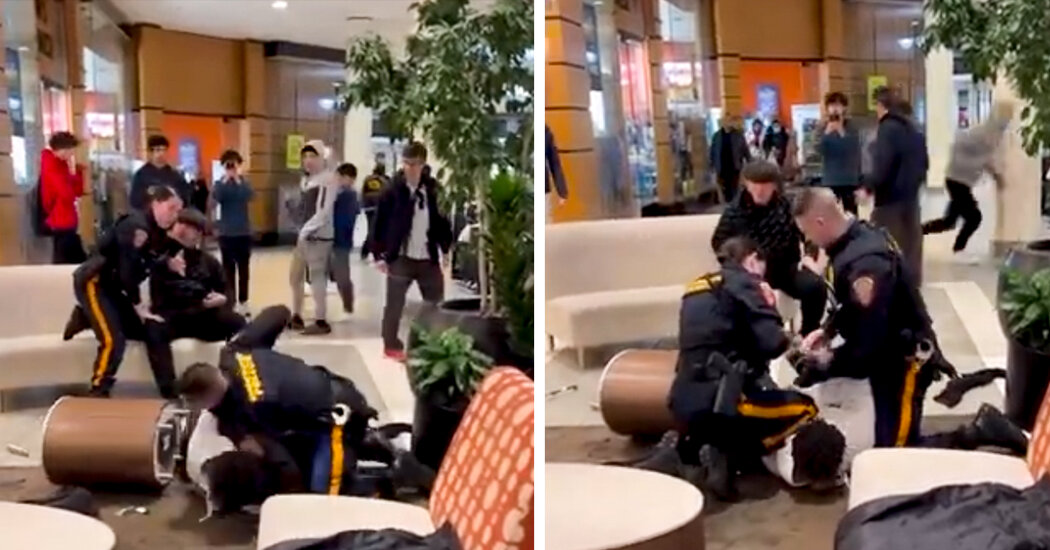 It was a routine scuffle that normally would have gotten little attention: two teenagers taking swings at each other in a New Jersey mall.

But when the police arrived and pulled them apart, one teenager, who is Black, was placed in handcuffs. The other one, who is white, was allowed to sit unrestrained on a couch.

The fight, which took place at the Bridgewater Commons mall on Saturday, was captured in a video that has been viewed more than 1.8 million times on Twitter.

“The appearance of what is racially disparate treatment,” Gov. Philip D. Murphy of New Jersey said at a news conference on Wednesday, “is deeply, deeply disturbing.”

On Monday, the Bridgewater Police Department wrote on Facebook, “We recognize that this video has made members of our community upset and are calling for an internal affairs investigation.”

In a letter to residents on Tuesday, the mayor of Bridgewater said that the township’s police chief had asked the Somerset County Prosecutor’s Office to look into the matter. The New Jersey State Conference of the NAACP is calling for the officers involved in the episode to be immediately removed from the force pending an investigation.

The family of the Black teenager, Z’Kye Husain, 14, is working with Benjamin Crump, the civil rights lawyer who represented the families of George Floyd, Breonna Taylor and other high-profile victims of police brutality against Black people.

In a brief telephone interview on Thursday, Z’Kye’s mother, who asked that she be identified only by her first name, Eboné, said her son remained in handcuffs for about 20 to 30 minutes. The white teenager, who Mr. Crump said was in the 11th grade, was not handcuffed, Eboné said. No charges were filed against either teenager, she said.

“The cops said it was just protocol for a situation like that for them to put the kids in handcuffs,” she said. “It just so happens my son was the only one with the handcuffs on.”

A spokesman for the Bridgewater Police Department referred questions to the Somerset County Prosecutor’s Office, which did not respond to requests for comment.

Z’Kye’s mother said her son was at the mall with friends around 7:30 p.m. on Saturday when the white teenager started harassing one of Z’Kye’s friends, who is in the seventh grade. Z’Kye defended his friend, she said, as other teenagers at the mall began recording the encounter with their phones.

In the video, the white teenager, who is wearing a dark sweatshirt, jabs a finger near Z’Kye’s face. Z’Kye pushes his hand away. Then the white teenager shoves Z’Kye in the chest with both hands. Z’Kye stumbles back. Then, both teens start throwing punches as the crowd around them backs away.

The officers throw the white teenager toward the couch and one briefly stays with him as the other officer tackles Z’Kye to the floor and begins to handcuff him.

The officer who was with the white teenager on the couch leaves him there to help restrain Z’Kye, both officers placing their knees on his back.

The white teenager stands up and appears to take a few small steps toward the officers and Z’Kye.

The video ends as one officer picks Z’Kye off the ground and the other walks over to the white teenager and puts a hand on his chest as if to guide him back to the couch.

“Yo, it’s because he’s Black,” one bystander says before the video ends. “Racially motivated.”

A Bridgewater Commons spokeswoman said both teenagers had been banned from the mall for three years. She declined further comment, citing the developing investigation.

Mr. Crump said other videos of the fight could surface showing more of the encounter and the officers’ response to it. He also said the episode was important because “too many of us do get killed when we’re wrongfully accused and falsely accused.”

Mayor Matthew Moench of Bridgewater Township, which is about 30 miles north of Trenton, told residents in his letter that it was “not appropriate for me or any other Township official to comment any further” because an investigation was underway. Mr. Moench did not respond to telephone calls and email messages seeking comment.

Township officials also canceled a previously scheduled town hall meeting on Wednesday, citing “the volume and nature of communications that have been received by our Township staff and Police Department,” according to a letter posted on the township’s website.