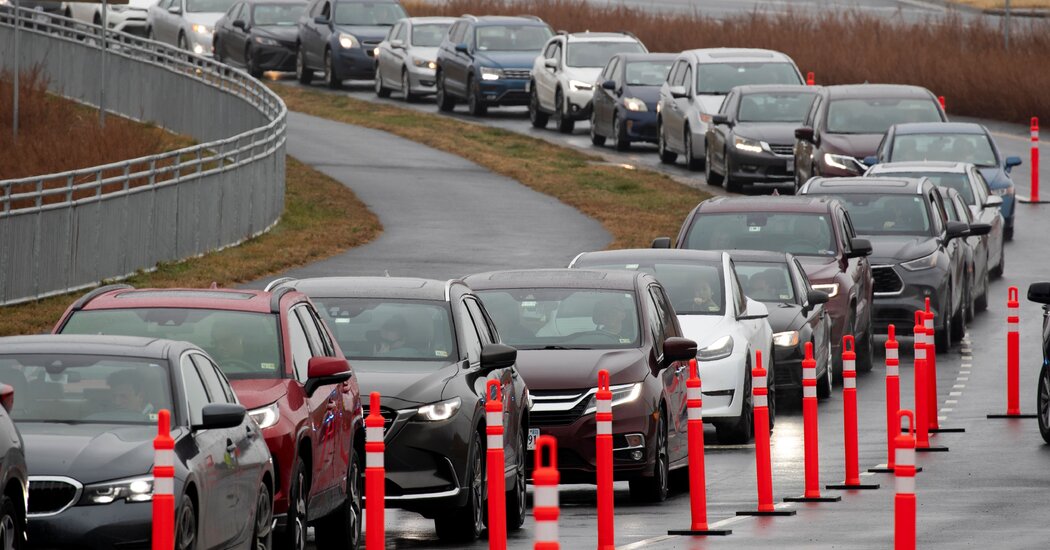 Christine Yi held out hope that the test results would come through until the doors to her flight’s boarding gate closed.

Ms. Yi, 45, a content creator in New York, was attempting to fly to Grand Cayman in the Caribbean over the Christmas holiday weekend with her boyfriend, James Tracey, 47, the executive chef at Isabelle’s Osteria, a restaurant in New York’s Gramercy neighborhood.

The Cayman Islands requires proof of a negative Covid test taken within 24 hours of departure to enter. Ms. Yi and Mr. Tracey had booked P.C.R. tests through N.Y.U. Langone medical center one day ahead of their Dec. 24 departure. She received her negative test results on the evening of the 23rd. Mr. Tracey’s test also came back negative — after 34 hours, a missed flight, $150 in change fees, a two-hour wait for two rapid antigen tests and a back-and-forth trip to John F. Kennedy International Airport.

“It was definitely a memorable start to our trip,” said Ms. Yi.

Frequent testing, combined with vaccines and masking, has been repeatedly cited as the key to a holiday season closer to the “normal” of prepandemic times. But for international travelers who need tests to enter their destinations, getting tested in time is easier said than done. Finding a test has become increasingly difficult — appointments are booked and walk-in sites often have hourslong waits. And even if you can get a test, it is far from guaranteed that your results will come back in time for you to board.

Making it even more difficult are the ever-changing requirements for international travel, with the testing deadlines often a moving target. In recent weeks, some places have shortened the window for valid test results, including the Cayman Islands — previously, a negative P.C.R. test taken within 72 hours was sufficient for entry.

Testing has been a repeated pain point throughout the pandemic, from the limited availability and turnaround times that could stretch as long as a week in the spring of 2020 to the shortage of at-home tests during the Delta surge last summer. But the one-two punch of the highly contagious Omicron variant and the holiday season has led to a huge demand for tests that the United States was, by and large, not prepared to meet. For some travelers, that means that the best-laid plans, and even backup plans, may fall through.

“We have as much test volume now as we did in the large wave that we saw last holiday season,” said Alicia Zhou, the chief science officer of Color, a Burlingame, Calif., health technology company that has partnered with organizations across the country to provide large-scale testing and vaccination programs. Color guarantees that P.C.R. results will be turned around within 48 hours or less; according to Dr. Zhou, the majority of results are returned in 24 hours or less. The tests are free to the end user. They’ve been able to maintain that turnaround time in the latest surge, largely because they did not scale back operations when the demand for testing dropped in the middle of 2021, Dr. Zhou said.

“It felt like it wasn’t time for us to step off the gas yet,” Dr. Zhou said. “Omicron snuck up on us, but it also came on the tail end of Delta.”

Demand for at-home tests approved by the Food and Drug Administration, like iHealth and BinaxNow, has skyrocketed, too, with pharmacies largely out of stock and shipping significantly delayed. Unless these tests are proctored by a medical professional, they are not sufficient for international travel, but they do offer peace of mind for family gatherings.

“We’re seeing unprecedented demand for BinaxNOW and we’re sending them out as fast as we can make them,” said a spokesman for Abbott, the company that produces BinaxNow.

The uncertainty has some people hedging their bets, setting up multiple tests in case one doesn’t come through in time. Alle Pierce, a Palm Springs, Calif.-based travel adviser and the founder of Gals Abroad Getaways, recommended making an initial testing appointment through a primary care doctor and coming up with a backup plan, which could involve making a second appointment or scoping out a walk-in clinic, as Ms. Yi and Mr. Tracey were forced to do last-minute, in case those results don’t come back in time.

If you are able to find a site offering a quick turnaround, “expect to pay more,” said Ms. Pierce.

Dr. Zhou understood the need for that strategy, but encouraged promptly canceling any additional testing appointments as soon as you’ve received your results.

“Try to make sure that you’re not overbooking and then not showing up to those appointments,” she said. “That leads to less availability for appointments for others.”

Canceled flights. With Covid surge, has come thousands of flight cancellations, as airlines are unable to adequately staff their flights. Looking for relief, the airline industry pushed the CDC to shorten its recommended isolation period for Americans infected with Covid-19. On Monday, it reduced the recommended quarantine period to five days for those without symptoms.

Around the world. South Africa announced that its Omicron wave had passed without a large spike in deaths. Case counts in the country are down 30 percent in the last week. The announcement offered cautious hope to other countries grappling with the fast-spreading variant.

Percia Safar, 31, an investor in Los Angeles, ended up paying $670 for two rapid antigen tests and a number of at-home tests in advance of an international trip. Her process was further complicated by a possible Covid exposure 10 days before she was meant to fly. In addition to self-testing at home daily and getting an antigen test five days after exposure, she needed to line up either a P.C.R. test taken within 72 hours of her departure, or a rapid antigen test within 24 hours. She said she found it nearly impossible to find a site offering P.C.R. tests that guaranteed results within her window — her local CVS Pharmacy was quoting a two-to-four-day turnaround.

A CVS spokesman said in a statement that the company is “continuing to meet the demand for Covid-19 testing, even with increasing numbers of patients seeking tests. He added that results are generally available within one to two days, but “may take longer due to local surges in Covid-19 cases.”

“I think I’m allowed to get some of that reimbursed by insurance,” said Ms. Safar. “And obviously, it was a privilege that I was able to pay out-of-pocket. But it’s a lot. I can’t believe that cost falls on us.”

Indeed, the ability to pay more for a test can seem like the only way to avoid long waits and slow turnaround times. Jack Ezon, the founder and managing partner of EMBARK Beyond, a travel advisory that caters to high-net-worth individuals, said that his clients hadn’t experienced delays or disruptions because of the current testing crush.

“Our clients will have a concierge doctor come to their home for a P.C.R. or are going to an express lab,” he said. “We’re not running into these issues so much, but our clients are willing to spend four or five times the price just to have the service.”