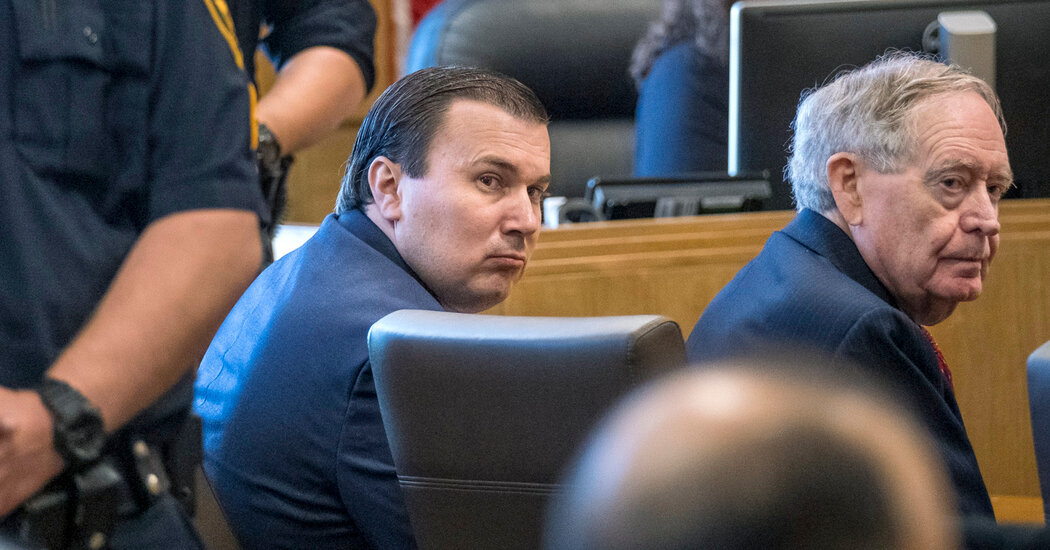 A former Texas nurse was sentenced to death this week for injecting air into the arteries of four patients recovering from heart surgery, causing fatal brain damage, a court official said.

A jury in Tyler, Texas, handed up the sentence on Wednesday in the capital murder case of the former nurse, William Davis, eight days after convicting him.

Prosecutors said during the trial’s sentencing phase that Mr. Davis, 37, had harmed at least 11 patients altogether by injecting air into their arterial lines or venous systems.

Two of those other patients later died, according to prosecutors, but charges were not brought because the cases would have been harder to prove.

In making their case for the death penalty, prosecutors had played a recording of a jailhouse phone conversation in which Mr. Davis told his ex-wife that he wanted to prolong the I.C.U. stays of the patients so that he could accrue overtime. Their deaths, Mr. Davis said on the call, were accidental.

Jacob Putman, the district attorney for Smith County, rejected that explanation during a news conference on Wednesday.

“Even if that were true and that he somehow was trying to prolong their illness, for someone to do that — kill their patient and then try again,” he said, “you have to be the kind of person who has no empathy, who does not care for another person, who is unconcerned with their well being, who feels no guilt.”

Mr. Davis was working for Christus Mother Frances Hospital in Tyler at the time that the four patients named in the case experienced complications after heart surgery in 2017 and 2018. He was fired about a month before his arrest in April 2018. Tyler is about 100 miles east of Dallas.

A lawyer for Mr. Davis, who lives in Hallsville, Texas, did not immediately respond to a request for comment on Thursday.

Mr. Davis’s death sentence is subject to an automatic appeal, Kaylee Hahn, an administrator for the 114th District Court, said in an email on Thursday.

During the trial, prosecutors presented a portrait of Mr. Davis as a sadistic caregiver who slipped into patients’ rooms when no one was watching and “enjoyed” injecting air into their arterial lines, which caused fatal brain damage.

Doctors were at a loss to explain what could have gone wrong until, the authorities said, they saw CT scans that showed air in the patients’ brains. During the trial, prosecutors played security camera footage showing Mr. Davis entering the room of one of the patients. Three minutes later, the patient’s heart monitor alarm sounded. He later died.

“There’s no way this could be accidental,” Mr. Putman said at the news conference. “The evidence is overwhelming. The only conclusion you can come to is someone who would do something like this would have to be cold and callous and unfeeling. He has no love for anyone but himself. What he’s done to these families didn’t faze him at all.”

The victims who died after air had been injected into their arterial lines were: Ronald Clark, 68; Christopher Greenaway, 47; Joseph Kalina, 58; and John Lafferty, 74.

Mr. Putman said that prosecutors and the police wouldn’t have been able to build a case against Mr. Davis without the hospital’s cooperation.

A spokesman for Christus Mother Frances Hospital said in an email statement on Thursday that many people suffered as a result of Mr. Davis’s actions.

“We hope the court’s decision and the conclusion of this trial will bring some peace to the families of the victims and to the victims who were irreparably harmed by Will Davis,” the spokesman said. “We will continue to pray for the peace and healing of the families, our associates and community, and all involved.”

Prosecutors pointed out that an average appeal in death penalty cases in Texas could take 10 to 12 years by the time it is decided by state and federal courts. They acknowledged that there could be additional victims, though they said it would be difficult to investigate because of the passage of time.

“I don’t doubt,” Mr. Putman said, “that there were more before that.”