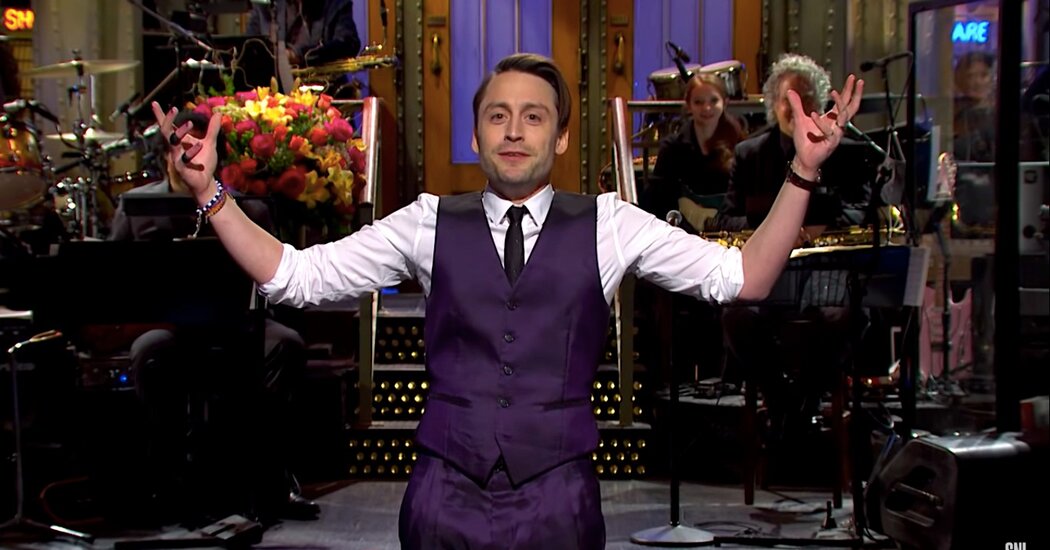 The last time Cecily Strong played the Fox News host Jeanine Pirro on “Saturday Night Live,” it seemed like she might be saying goodbye to her longtime TV home. (She did, after all, end the segment by singing “My Way” and dousing herself in a giant box of wine.)

But to the benefit of the show, Strong did not leave “S.N.L.,” and she was back tonight playing Pirro in the show’s cold open. She’d get a more memorable moment in the spotlight later in the night — for now, the segment belonged to a rookie cast member, James Austin Johnson, who has rapidly become one of “S.N.L.”’s most versatile celebrity impressionists and brought his capable sendup of former president Donald J. Trump to the program for the first time.

Strong began by interviewing a guest she introduced as “an American brave enough to stand up and say, screw you science — I know Joe Rogan.” That turned out to be Pete Davidson playing the Green Bay Packers quarterback Aaron Rodgers, who tested positive for the coronavirus earlier this week and confirmed, in a combative interview on Friday, that he was not vaccinated.

Davidson, as Rodgers, defended his ambiguous remarks about his vaccination status. “I never lied,” he said. “I took all my teammates into a huddle, got all their faces three inches away from my wet mouth, and told them trust me, I’m more or less immunized. Go team!”

He added, “At the end of the day, my record is still 7-1. Meaning, of the eight people I’ve infected, seven are fine.”

He introduced Heidi Gardner as a member of his parental task force on education, and she cited some of the books she wanted removed from the state’s curriculum, including “Pride and Prejudice” (“Prejudice is fine, but pride is a term that has been co-opted by the gays,” Gardner said) and “The Great Gatsby” (“Too much jazz”).

Strong brought out her surprise final guest: Trump, as played by Johnson (who is already holding down the recurring role of President Biden on “S.N.L.”).

“I just wanted to congratulate Glenn Youngkin and mostly myself on a tremendous victory in Virginia,” Johnson said. “You know what Glenn? We did it together.”

Moffat uncomfortably replied, “You don’t have to say that.”

Johnson went on to deliver a discursive monologue, complete with a “Pardon the Interruption”-style topic list and countdown clock, in which he rambled on about “Star Wars” (He claimed to have told George Lucas, “You need to do it with swords — the lasers are not enough”), “Dune,” Timothée Chalamet, Jason Momoa, “Game of Thrones” and, finally, the state of Virginia.

An impressed Strong asked him, “How do you keep that all in your brain?”

Johnson answered, “I had my ears sealed so nothing comes in or out.”

Opening Monologue of the Week

Kieran Culkin, who plays the sarcastic media scion Roman Roy on HBO’s “Succession,” naturally used his opening monologue to crack some jokes about his role on that hit series. Roman, he said, is “one of the nicer characters on the show — which still makes him one of the Top 10 worst humans on TV.”

Culkin also reminded viewers that he had previously appeared on “S.N.L.” some 30 years ago when his brother Macaulay had hosted the program, and that 9-year-old Kieran had been hoisted aloft by grown-up cast members during the show’s good nights. Did a 39-year-old Kieran repeat the tradition at the end of this weekend’s broadcast? You’ll just have to watch and see. (OK, fine, he did repeat it.)

Surprise Celebrity Cameo of the Week

This is why you watch an “S.N.L.” sketch all the way to the end. It seemed, at first, like a typical outing of “The Dionne Warwick Talk Show,” a recurring segment in which Ego Nwodim plays a delightfully kooky version of that enduring pop singer. And as usual, she was joined by guests that she doesn’t recognize or particularly care about, including Chloe Fineman as Miley Cyrus, Culkin as Jason Mraz and Ed Sheeran as Ed Sheeran.

But just as the sketch seemed to be winding down, Nwodim said, “I’m sick and tired of interviewing people who are not icons. Please welcome: me.” And out strode the real-life Warwick, who sat down in a chair opposite her. Nwodim asked the singer, “Dionne, why are you perfect?” Warwick replied, “My darling, I am not perfect. I’m just very, very good.” Their brief duet of “What the World Needs Now” that followed was almost too generous but we’ll take it anyway.

Weekend Update Jokes of the Week

Over at the Weekend Update desk, the anchors Colin Jost and Michael Che riffed on the passage of President Biden’s infrastructure plan in the House of Representatives, and the results of Tuesday’s elections.

Our top story tonight, like it’s been for as long as I can remember: infrastructure. Last night, the House passed President Biden’s $1.2 trillion infrastructure bill, which should be enough to clean as many as two of LaGuardia’s bathrooms. The infrastructure bill will also expand internet access across the U.S., which is great news, because when has more internet ever been bad for America? [His screen displays a photo of the Jan. 6 Capitol riot.]

Democrat Terry McAuliffe lost to Republican Glenn Youngkin in the Virginia governor’s race. But on the bright side, losers from Virginia usually get a statue. [His screen displays a photo of a monument to Robert E. Lee.] Political experts say that the Republican victory in Virginia’s governor’s race was fueled by white women who didn’t go to college. Which just so happens to be the same exact group I target on Tinder.

Weekend Update Character of the Week

Here, as promised, was Cecily Strong’s true standout moment from the episode.

At the Weekend Update desk, Jost began with a prelude about the recent Supreme Court arguments on a restrictive Texas law that bans most abortions after six weeks of pregnancy. He then introduced Strong as a character called Goober the Clown Who Had an Abortion When She Was 23.

While she sprayed Jost with water from a trick boutonniere and tried to make balloon animals, Strong talked about how common it is for clowns to have abortions and how they feel more comfortable discussing the subject with one another when they learn that other clowns have had them. It was not the easiest subject to mine for comedy. But as Strong explained, describing a doctor who jokingly asked if she had gotten pregnant on her way over to the clinic, “It’s not like a funny ha-ha joke, but like a funny, you’re not an awful person and your life isn’t over now joke. The best kind.”