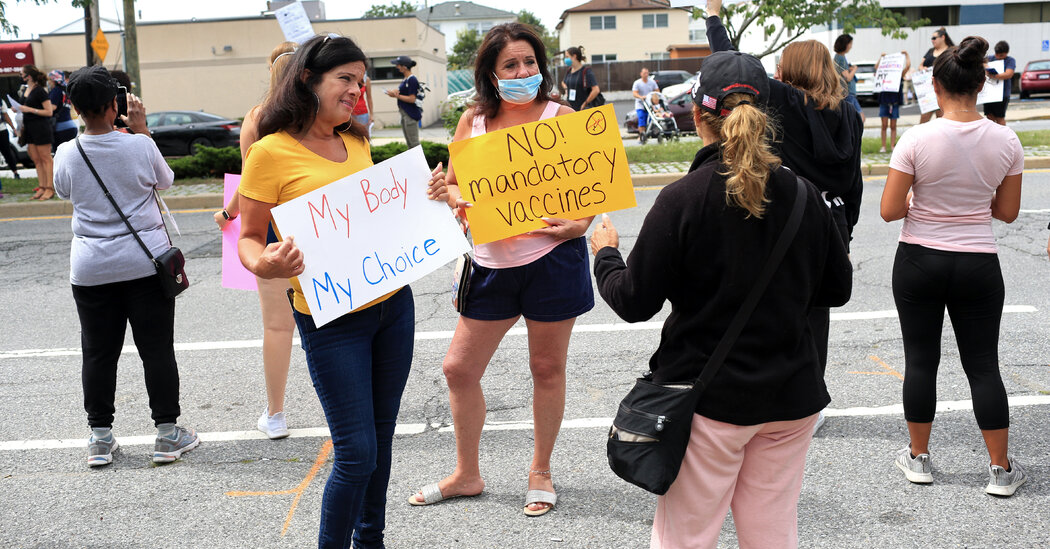 Northwell Health, New York State’s largest health care provider, announced on Monday that 1,400 employees — less than 2 percent of its staff — refused to get vaccinated against the coronavirus and had to leave their jobs.

New York is requiring that the state’s more than 650,000 hospital and nursing home workers be vaccinated, a mandate that started to take effect last week, prompting tens of thousands of employees to get their shots. Others filed lawsuits, and courtrooms across the state are determining when and how to allow exemptions to the requirement.

New York’s health care mandate is particularly strict: Employees do not have the option for weekly testing or exemptions for religious reasons, though the latter is being challenged in the courts.

The Biden administration has made a vaccine requirement for many health care workers a central part of its effort to vaccinate the country, and many medical workers, particularly those at large hospital systems like Northwell, appear to be complying with vaccine mandates.

In New York state, 87 percent of hospital workers were completely inoculated as of Sept. 29, according to state health data.

The possibility of widespread staff shortages loomed before the mandate took effect, so much so that Gov. Kathy C. Hochul declared a state of emergency last week that would allow her to deploy National Guard troops, expedite visas for workers from abroad and recruit newly graduated or recently retired health care professionals to fill staffing shortages.

So far the number of workers in New York who have left their jobs is relatively small, and does not appear likely to result in the kind of staff shortages that could compromise patient care. Still, the governor’s contingency plans reflect the fears that New York hospitals could be imperiled in the same way that hospitals were in parts of the country that the Delta variant has devastated.

Northwell, which employs more than 76,000 people said in a statement that vaccinating all of its employees would allow the provider to “provide exceptional care at all of our hospitals, without interruption and enable all our facilities to remain open and fully operational.”

“Northwell has taken a rapid, aggressive approach to move successfully toward full vaccination compliance while maintaining continuity of care and ensuring that our high standard of patient safety is not compromised in any way,” the statement continued.

Some Northwell workers protested the vaccine mandates when they were first announced in August.

John Trinchino, a registered nurse, said he was fired last week from his job at Staten Island University Hospital, a Northwell facility. Mr. Trinchino said that he had Covid-19 earlier in the pandemic, and that he thought the antibodies from his infection would protect against further illness.

The State of Vaccine Mandates in the U.S.

Mr. Trinchino added that requiring vaccination violated his civil liberties, and he did not plan on getting vaccinated.

“All this is going to lead to is worse care for the patients, and I’m just disgusted by it,” he said.

Joe Kemp, a spokesman for Northwell, said the company regretted losing any workers over vaccinations. He said a few thousand employees had gotten vaccinated as the deadline neared, and that some who initially lost their jobs had gotten shots and returned to work.

Terminated workers have the opportunity to interview for reinstatement for 30 days, Mr. Kemp said, but Northwell was “openly recruiting” for the newly vacant jobs.