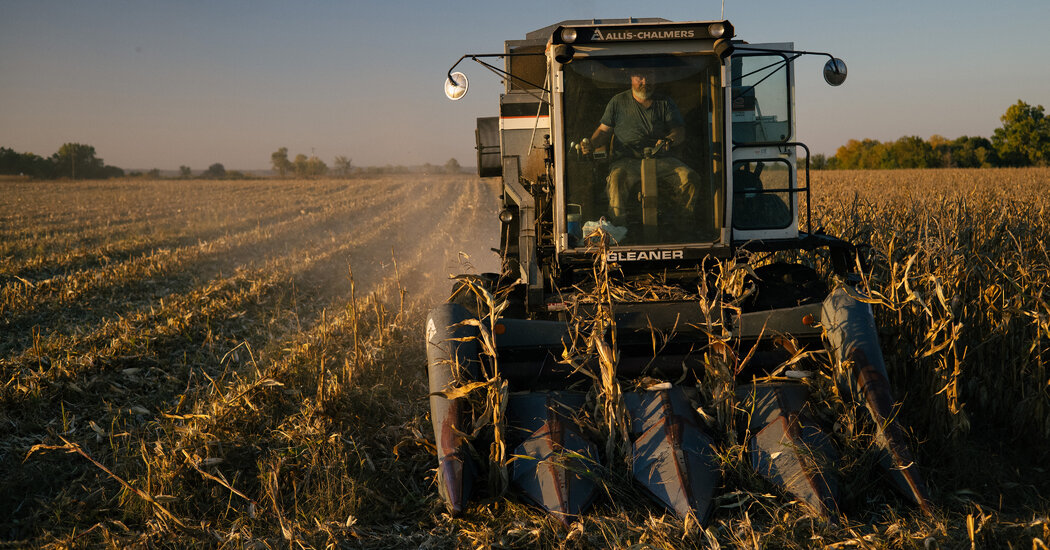 In his earliest memories of his family’s farm, Ethan Uhlir rides in an old truck with his grandfather Arden, feeding cattle and mending fences.

Before Arden’s death five years ago, he “reminded me that I was a good cattleman,” Ethan said, and “I have to keep it like that.”

Ethan, now 17, still notices his grandfather’s wiring technique in fence posts scattered across the farm in the rolling plains of northeast Nebraska, along the South Dakota border. He walks along the same paths as six generations of Uhlirs, but Ethan may be the last to work the land.

“There’s enough labor for four people but not enough income for one,” his father, Jeff, said.

Like most farmers, Jeff sells his cattle, corn and soybeans at prices set by a global commodities market, but only large farms can absorb the narrow profit margins.

Though the family’s small farm is valuable — its 880 acres are assessed at $1.3 million — property taxes eat up most of the money it does make.

Even in a good year when the farm grosses $60,000, Jeff feels lucky if he has money left over for savings.

For families like the Uhlirs, farming is increasingly unsustainable, as drought and extreme weather, fluctuating commodity prices and rising costs alter the economics of running a small- to midsize operation. Hundreds of family farms file for bankruptcy each year in the United States, with the largest share routinely coming from the Midwest.

Nebraska’s high property taxes, which it collects from its 93 counties and reapportions, are compounded by Knox County’s shrinking population.

About 8,400 people live in the county, down 26.8 percent over the last 40 years. With fewer taxpayers, farmers who own hundreds of acres must shoulder the cost of schools, roads and other public services. After paying for necessities like fertilizer, seed and pesticides, Jeff must cover a $15,965.68 property tax bill.

Nebraska’s agricultural land property taxes are 46 percent higher than the national average, according to a 2019 report by the University of Nebraska, Lincoln, and most farmers pay 50 to 60 percent of their net income in taxes.

Next fall, Ethan hopes to pursue an associate degree in nursing. “I don’t think that I would be able to financially support myself just living off the farm,” he said.

Most of “the equipment we have, my grandfather bought,” Ethan said.

Ethan had once hoped to be named the Future Farmers of America’s “Star Farmer,” just like his grandfather Arden in 1960.

During the 1980s farm crisis, Arden nearly lost the farm. He took on debt and worked to pay it off up until the last few years of his life. His wife, Karen, worked for 16 years in an Alzheimer’s unit at an assisted-living facility in Verdigre.

Jeff’s financial situation is worse than previous generations, he said. “Every year, the property valuations get higher and everything else don’t keep up.”

Payday comes once a year on the farm: in the fall, when Jeff sells cattle and crops.

Knox County classifies four soil types when taxing agricultural use of land, and much of Jeff’s soil received the highest rating and a higher tax rate, despite lower yields than farms in other counties with less sandy soil.

Farming becomes more challenging as he ages, Jeff says, and he wonders what it will be like without Ethan next year, when he’s at college. “As my helper goes away, things get tougher.”

“At some point, the people raising your food are going to be dead,” Jeff said. “Once we’re gone, we’re not coming back.”

The family has survived plenty of physical and personal hardships. Just months after taking over the farm in 2016, Jeff broke his neck in a car accident. And on Mother’s Day 2020, most of their home was destroyed by an electrical fire that started in the attic.

The expense of unexpected health issues worries Jeff, who told his wife not to call the ambulance if he has a heart attack or stroke.

“It would break my heart if this place got lost because of me, and I’m not going to be whole again if that happens,” he said.

Every year, Jeff travels to Lincoln, the state capital, to testify on property tax bills. He is also appealing how the county taxes his land.

When Ethan takes over from Jeff, he will probably continue to work in a health care facility an hour or two away.

To cover the property taxes, he might rent the land to another farmer or take part in the federal Conservation Reserve Program, which rents farmland for environmental restoration.

“It’s been in the name this long,” Ethan said. “I don’t want to be the weak link and lose it.”

Alyssa Schukar is a photographer and writer based in Washington, D.C.