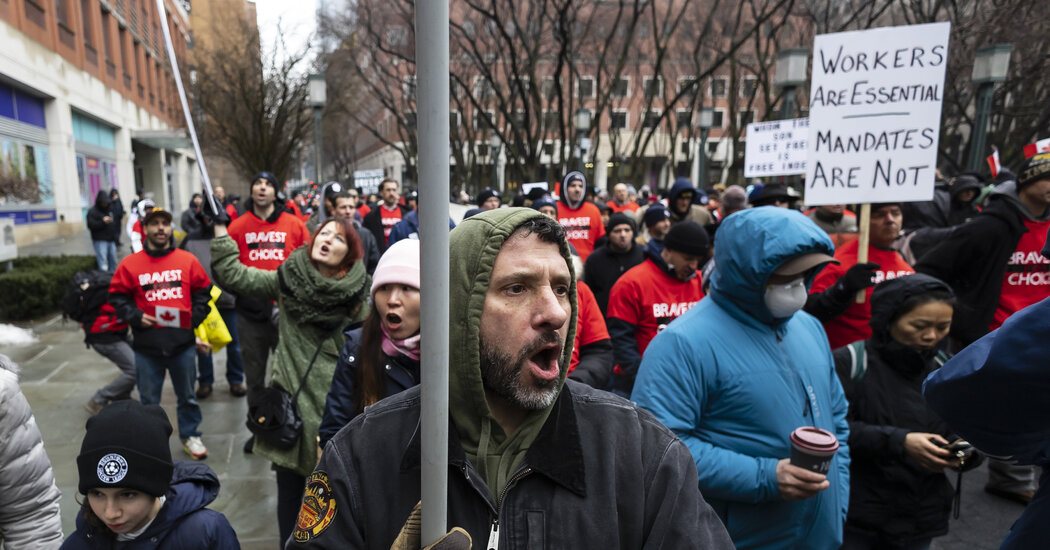 Hundreds of municipal workers marched across the Brooklyn Bridge this week, chanting in unison for New York City to end its vaccine mandate, and carrying signs that said “Fire Fauci” and “Unvaccinated Lives Matter.”

Their pleas were rejected by Mayor Eric Adams, who has reaffirmed the city’s looming ultimatum: If city workers do not get vaccinated, they are the ones who will be fired.

The Adams administration is poised to dismiss up to 3,000 municipal workers on Friday for refusing to get vaccinated against the coronavirus, in what could be the nation’s most drastic example of a work force reduction tied to a vaccine requirement.

The mandate, put in place by Mr. Adams’s predecessor, Bill de Blasio, has been effective: About 95 percent of the city’s 370,000 workers have received at least one dose of the vaccine, an increase from 84 percent when the mandate was first announced in October.

Mr. Adams has repeatedly said that he preferred not to fire police officers, firefighters and teachers, but that it was more important to enforce vaccination against the virus.

“We have to be very clear — people must be vaccinated if they are New York City employees,” Mr. Adams said at a news conference on Thursday in the Bronx. “Everyone understood that.”

“We are not firing them,” he added. “People are quitting. The responsibility is clear.”

The loss of roughly 3,000 workers would represent less than 1 percent of the city’s work force, but is still believed to be the largest worker reduction in the nation in response to a vaccine mandate. Another roughly 1,000 new city employees must show proof of two doses by Friday or they could also be fired.

Dr. Jay Varma, a former health adviser to Mr. de Blasio, said the mandate was one of the most important public health measures the city took during the pandemic, and that it protected essential workers and the public while setting a precedent for private employers and other communities.

Other cities like Boston and Chicago have moved to require vaccination for city employees and have faced serious pushback from unions and workers. In other places like San Francisco, Washington State and Massachusetts, hundreds of workers have lost their jobs, though most have complied with mandates.

Harry Nespoli, the president of the sanitation workers’ union, said he was urging Mr. Adams to slow down and not fire workers yet because there were still “people that do not want to put this vaccination in their body.”

The city could replace fired workers, Mr. Nespoli said, but the department would lose valuable experience.

“If we get another blizzard, service could be affected,” he said. “People are trained at what they do and it’s important. How fast can you train someone compared to someone who has 15 years on the job?”

City officials said the potential dismissals should have no effect on city services: The 3,000 targeted workers have been on unpaid leave for months. The city also suggested that the actual number of people fired may be lower, as some may decide to get vaccinated just before the Friday deadline or submit proof of vaccination.

About 44 sanitation workers were facing termination on Friday, according to Mr. Nespoli.

“It changes every day,” he said. “Some people are getting vaccinations now — they don’t like it, but they’re going for it. They like eating every week and paying their bills.”

Mr. Adams, a Democrat who took office in January, chose to keep other pandemic policies by Mr. de Blasio, including vaccine requirements for private employers and for indoor dining, gyms and movie theaters. About 38,400 city workers have received at least one dose of the vaccine since the municipal mandate was announced in October.

Mr. Adams and Mr. de Blasio have both argued that vaccine mandates are needed to keep New Yorkers safe, and they pushed for more people to get vaccinated and boosted during the Omicron wave. More than 85 percent of adults in the city are fully vaccinated.

Covid boosters. Data released by the Centers for Disease Control and Prevention showed that booster shots against the coronavirus lose much of their potency after about four months, adding to evidence suggesting that some Americans may need a fourth dose.

Vaccines for young children. The Food and Drug Administration said that it would wait for data on the effectiveness of three doses of the Pfizer-BioNTech coronavirus vaccine in children younger than 5 before deciding whether to authorize it for that age group.

Besides the 3,000 workers that could be fired, another 9,000 city workers are also unvaccinated, but are seeking exemptions, or working with unions to avoid terminations.

In all, about 13,000 workers have applied for exemptions, which are known as reasonable accommodations, and 54 percent of those requests have been processed so far, according to city officials. About 2,100 were approved and 4,910 were denied.

All city workers are required to receive one dose of the vaccine. New hires must get two doses if they received a vaccine that includes a second dose. Booster shots are not required, but Mr. Adams has said he was considering the idea.

Paul Schweit, a firefighter who has been on unpaid leave for months, said he requested a religious exemption that was denied, and he is appealing the decision. While he is not facing termination on Friday, he said he has struggled to pay his mortgage and was working odd jobs to stay afloat. Still, he does not want to be forced to get the vaccine.

“It’s about risk versus reward — me and my family, we try to live as holistic a lifestyle as possible,” he said. “If I don’t need it, I don’t really want it.”

Mr. Schweit, who leads a group called Bravest for Choice that opposes the vaccine mandate, argued that most essential workers already have antibodies after recovering from the virus. He said workers were willing to be tested regularly.

When Mr. Adams was elected in November, Mr. Schweit said that he had an “extreme amount of hope” that the new mayor would change course from Mr. de Blasio and negotiate with unions to find a solution. He believes Mr. Adams, a former police captain, might change his mind and avoid firings.

“I still have hope — he has the power to re-evaluate this on a daily basis,” he said.