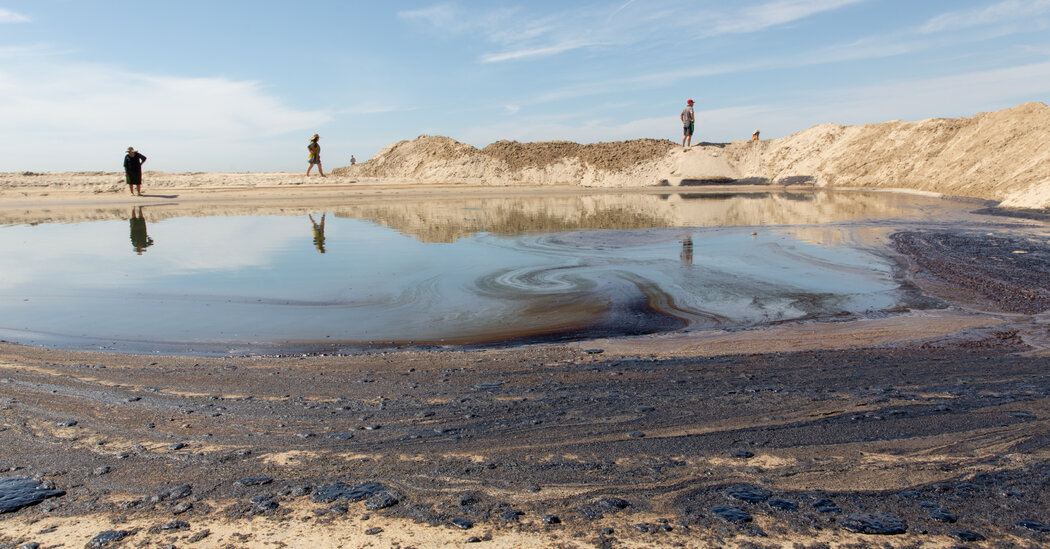 A pipeline failure off the coast of Orange County, Calif., on Saturday caused at least 126,000 gallons of oil to spill into the Pacific Ocean, creating a 13-square-mile slick that continued to grow on Sunday, officials said.

Dead fish and birds washed ashore in some places as cleanup crews raced to try to contain the spill, which created a slick that extended from Huntington Beach to Newport Beach.

It was not immediately clear what caused the leak, which officials said occurred three miles off the coast of Newport Beach and involved a failure in a 17.5-mile pipeline connected to an offshore oil platform called Elly that is operated by Beta Offshore.

The U.S. Coast Guard said in a statement Sunday night that crews had “recovered” about 3,150 gallons of oil. Fourteen boats were involved in the cleanup effort on Sunday, and crews had deployed 5,360 feet of boom, a floating barrier that helps contain oil.

The spill prompted officials to close the beaches in Huntington Beach, where the third day of the annual Pacific Airshow was canceled on Sunday, a day after an estimated 1.5 million people had gathered on the oceanfront to watch the Blue Angels and Thunderbirds.

Mayor Kim Carr of Huntington Beach said at a news conference on Sunday afternoon that the spill was “one of the most devastating situations our community has dealt with in decades.”

Ms. Carr said city officials had not received confirmation that the spill had been capped. Martyn Willsher, the chief executive of Amplify Energy Corp., which owns Beta Offshore, said later at a separate news conference in Long Beach, Calif., that the pipeline had been “suctioned” at both ends and that the spill may have peaked at around 126,000 gallons.

“I don’t expect it to be more,” he said. “That’s the capacity of the entire pipeline.”

The Elly site, he added, has two producing platforms and a processing platform with around 70 wells. The platforms sit atop a rich supply of oil in federal waters managed by the Interior Department. All of the platforms have been shut down, Mr. Willsher said.

The beaches in Huntington Beach will be closed until further notice, Ms. Carr said on Sunday afternoon, adding that it was too early to say how long they would be off limits.

The cleanup efforts were being led by the Coast Guard, while in Huntington Beach the local response was focused in part on “preventing an ecological disaster by mitigating the impacts of the oil on our precious wetlands and wildlife,” Ms. Carr said.

She said that “the responsible parties” to blame for the spill should “do everything possible to rectify this environmental catastrophe.” She added that officials were looking at measures “to make sure that they are held accountable for this.”

Earlier on Sunday, Ms. Carr said that the equivalent of 3,000 barrels of postproduction crude oil had spilled into the ocean since the situation was initially reported around 9 a.m. local time on Saturday.

The oil slick appeared to infiltrate the Talbert Marsh, a 25-acre ecological reserve across from Huntington State Beach that is home to dozens of species of birds, officials said. “The impact to the environment is irreversible,” Katrina Foley, a supervisor for Orange County, said at the news conference on Saturday night.

Eric McCoy, the marine safety chief for the Huntington Beach Fire Department, said on Saturday that officials used a plane to survey the size and location of the slick. “Obviously the potential for significant environmental damage still exists,” Chief McCoy said at the news conference, pointing out that the U.S. Coast Guard had classified the slick as a “major spill.”

In a letter on Sunday, Representative Michelle Steel, a Republican who represents much of Orange County, asked President Biden to issue a major disaster declaration in response to the spill.

“It is imperative that the federal government assist in recovery efforts,” Ms. Steel wrote. “Constituents who live along the shoreline are already reporting oil on the beach and strong odors. Dead fish and birds are already being reported on beaches and shorelines.”

The Coast Guard did not offer new details on Sunday, but it said in a joint statement with the California Department of Fish and Wildlife on Saturday that the “cause of the spill, volume and type of oil are under investigation.” The agencies advised the public that they did not need volunteers to help with the cleanup, saying that it could hinder the response.

Mayor Brad Avery of Newport Beach said he was leaving Catalina Island and heading toward the Huntington Beach air shows on Saturday when he heard radio chatter of boats finding oil in the water.

Five miles off Huntington Beach, “we have these beautiful dolphins” following along with the boat, he said. “We had six or seven dolphins.”

“To our dismay, all of a sudden, we were in this big patch of oil. It was very thick,” he said, describing a consistency that varied from a slight sheen to three-by-three foot patches of black that looked like tar. The dolphins were swimming through it.

“It was sort of a moment where we have this beautiful nature, and then this man-made disaster,” Mr. Avery said.

Environmental groups said that the spill underscored the need for the state of California to move away from fossil fuels in favor of renewable energy. Laura Deehan, the state director of Environment California, said in a statement on Sunday that the spill was “a stark and dark reminder that oil is dirty, dangerous, and can make our air and water too toxic for life.”

The Orange County health authorities on Sunday warned that people should seek medical attention if they touched the oil or inhaled oil vapors, which can be toxic.

The spill was not the first of its kind to imperil California’s coastline. In 2015, the Refugio spill near Santa Barbara, the worst in decades for the state, sent more than 100,000 gallons of crude oil spilling mostly into the ocean after an onshore pipeline ruptured. A $22 million settlement was finalized in October 2020 to restore natural resources damaged by the spill.

A three-million-gallon spill off Santa Barbara in 1969 has been credited with helping to set off the modern-day environmental movement. Environmentalists point out that oil spills can kill thousands of animals, cost tens of millions of dollars to clean up and contaminate beaches for months.