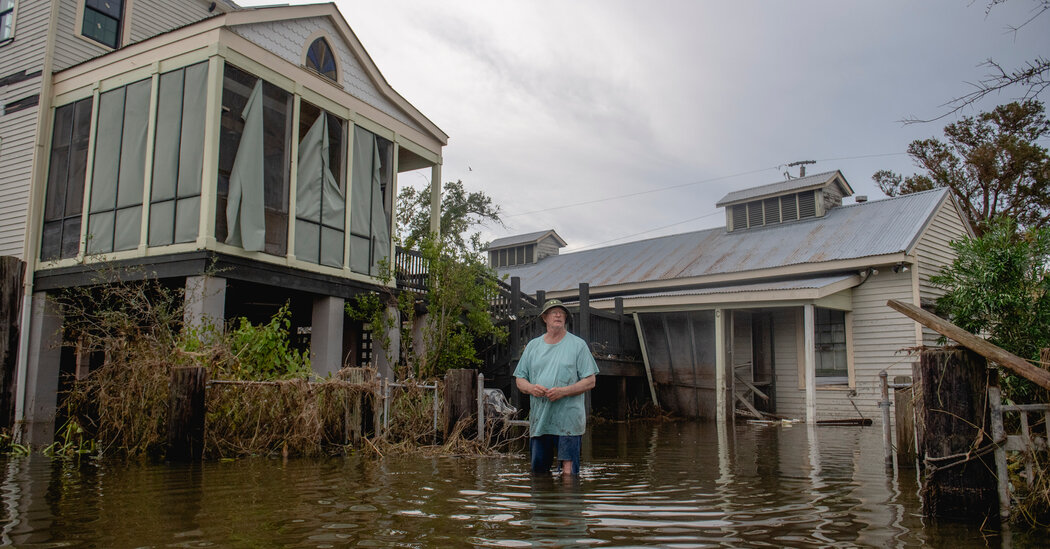 BROUSSARD, La. — Four Louisiana nursing home residents who were evacuated ahead of Hurricane Ida have died, state officials said on Thursday, and state inspectors say they were prevented this week from conducting a full assessment of conditions in the site where they were relocated.

Three of the deaths were classified as storm-related by the coroner, though definitive causes of death have not yet been confirmed, according to the Louisiana Department of Health. Officials identified the victims as a 59-year-old woman from Jefferson Parish and two men, a 52-year-old from Orleans Parish and a 77-year-old from Terrebonne Parish.

“We have significant concerns about conditions in this facility,” state officials said of the location the nursing home residents were sent to as a refuge from the storm that battered Louisiana before pounding its way up the East Coast. Details of that location were not provided.

On Thursday evening, Gov. John Bel Edwards said that state and federal officials would investigate what had happened. “We will do everything we can to make sure our most vulnerable citizens are properly taken care of,” he said. “It appears that that most certainly was not the case here.”

The deaths of the nursing home residents in Tangipahoa Parish, north of New Orleans, raised the death toll of the storm and its aftermath in the Southeast to at least 16, from causes including carbon monoxide poisoning and electrocution.

The mounting toll came as hundreds of thousands of residents of Louisiana and Mississippi spent a fourth day cleaning up the storm’s debris in darkness, amid soaring temperatures, and without easy access to the basic necessities: fresh water and meals.

By Thursday, electricity had been restored to customers in areas including Baton Rouge and St. Bernard and St. Jefferson Parishes, officials said. But in and around New Orleans, many people remained without power. Patience was waning.

Officials in New Orleans announced on Thursday that they were organizing a voluntary evacuation option for residents hoping to get out of the city. Details of that plan are still in the works, but it would allow residents to be taken to a state-run shelter outside the city, said Collin Arnold, the New Orleans director of homeland security.

The city would give priority to older people and disabled residents and would then make the option available to the general public, he said.

Across Louisiana, there were still hundreds of thousands of customers without power on Thursday, including nearly 600,000 served by Entergy. By early afternoon, 30,000 power customers in New Orleans had their electricity restored, said Ramsey Green, the city’s deputy chief administrative officer for infrastructure.

Mayor LaToya Cantrell, speaking at an afternoon briefing, noted that in addition to electricity, access to fuel continued to be a challenge for city residents. “We just have not received adequate fueling sources to the general public,” Ms. Cantrell said, adding that “when we get more, we shall share more.”

In Broussard, horns honked louder and louder in a long line at a gas station where Pat Hille and Robin Corrabi filled up brand-new gas cans, their compact S.U.V. packed with supplies to take back to Ms. Hille’s family in LaPlace.

“If we get water back, it would make a difference,” Ms. Corrabi said.

President Biden, who is expected to visit the state on Friday, said the flash floods that had inundated New York City and the powerful winds that had knocked out power in Louisiana were a sign that “extreme storms and the climate crisis are here” and that the storms and fires creating life-or-death situations across the country constituted “one of the great challenges of our time.”

“I think the key in what we are trying to do is offer some progress, and that is the goal,” Mr. Arnold, the homeland security director in New Orleans, said. “Every day, we open a new site, some new service.”

He added that “there are lots of lessons from this, after all of this is done.”