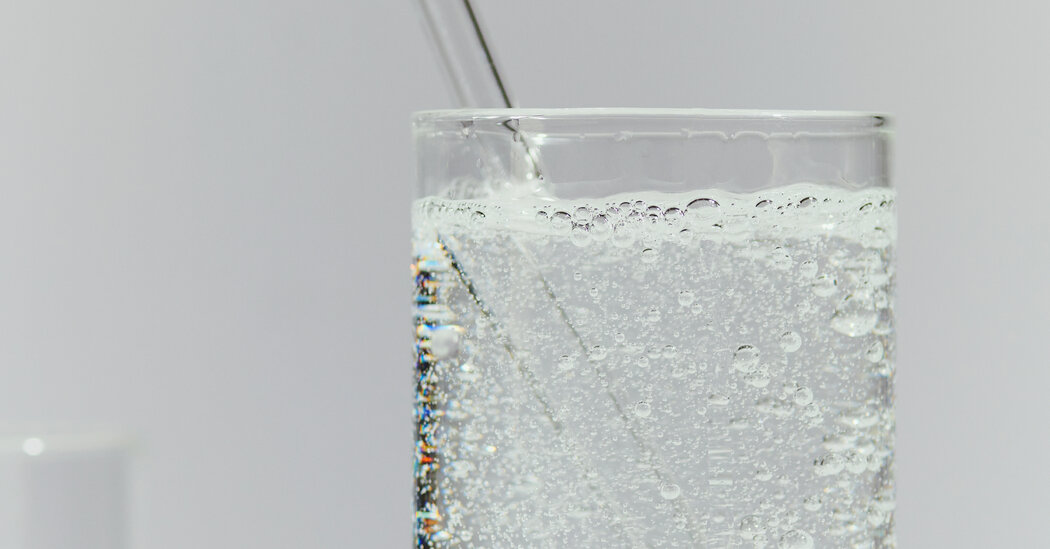 I drink a lot of unsweetened seltzer. Does that have the same health benefits as drinking regular water?

There’s still water and then there’s what my 4-year-old calls “spicy water,” better known as seltzer or sparkling water. Crisp, bubbly and effervescent, carbonated water has become a daily ritual for many and a growing segment of the beverage industry, with yearly sales now topping $4 billion in the United States.

For those who crave it, carbonated water offers a sensory experience that flat water cannot: There’s the satisfying snap as you pull back the tab on the can. The sound of the fizz as you unscrew the bottle cap to pour yourself a glass. The tingly sensation as the beverage hits your tongue, sometimes with a hint of “natural” flavor.

Still water is great for hydration, “but you would be surprised at the number of people who don’t like the taste and are unwilling to drink it,” said Anne Linge, a registered dietitian-nutritionist at the University of Washington Medical Center in Seattle. “Adding carbonation may make it more acceptable.”

Nutritionists agree that carbonated water (a category that includes seltzer water, which is artificially carbonated, and naturally sparkling water) is just as hydrating as regular water, however tap water has the added benefit of fluoride, which helps prevent tooth decay.

“If you are using fluoridated water for brushing your teeth, cooking and some of your hydration, you can also include sparkling water in your diet,” Ms. Linge said.

But keep in mind that carbonated water is more acidic in our mouths than flat water.

Bubbly water contains carbon dioxide, which is converted to carbonic acid when it mingles with saliva, lowering the pH level of your mouth. The pH scale indicates whether a solution is more acidic (lower pH) or alkaline (higher pH). Drinks with a lower pH can be erosive to teeth, making them more susceptible to cavities; however, unsweetened carbonated water is not nearly as erosive as soda or fruit juice, according to a 2016 study published in the Journal of the American Dental Association.

Some carbonated water brands include ingredients like citric acid for taste, which can raise the acidity level. Adding your own slices of lemon or lime would have a similar effect. And because the ingredient list will often say “natural flavor,” it is hard to know exactly what was added.

Even so, “it would take quite a lot of consumption throughout the day to have damaging effects similar to what we’d see with fruit juice or soda,” said Dr. Brittany Seymour, an associate professor at the Harvard School of Dental Medicine and a spokeswoman for the American Dental Association.

The bottom line: Because carbonated water still has the potential to be erosive, think of it as a once-a-day treat rather than your main source of water, Dr. Seymour said.

“If you want to have two or three sparkling waters a day, perhaps pair them with a meal,” she added.

When you eat, your mouth produces additional saliva, which can help neutralize acids on the surface of your teeth.

If you prefer drinking it alone, without food — Dr. Seymour usually drinks unsweetened seltzer while cooking dinner — use a straw to help the water bypass your teeth. In general, try not to sip it for more than an hour. Drinking carbonated water over a long time period prolongs the amount of time that your teeth are exposed to acidity.

If you love fizzy water and like to drink it multiple times a day, without meals, consider brushing your teeth with a fluoride toothpaste afterward to stave off tooth decay. Just make sure to wait at least 30 minutes after your last drink, Dr. Seymour said.

Why? The acidity of the carbonated water softens the enamel of your teeth. Taking a break gives your enamel a chance to re-mineralize and return to its normal hardened state, which is the ideal surface for brushing because it can better tolerate abrasives, she added.

If you have kids who also like to indulge in bubbly water, “I would say in general it’s fine,” Dr. Seymour said. But, she added, “I wouldn’t do it everyday with my daughter.” Ideally, parents should encourage their children to drink still, fluoridated water to guard against cavities, she said, and reserve the sparkling water for special occasions.

Carbonated beverages can also contribute to gas and bloating, but the degree varies from person to person.

“When you swallow carbonation it has to come out somewhere, so you either belch it out or it’s passed through flatulence,” said Courtney Schuchmann, a registered dietitian at University of Chicago Medicine who specializes in gastrointestinal health. “If you’re someone who already has issues with gas and bloating, it can cause more symptoms for you.”

Carbonation can also make acid reflux worse and have a “filling effect,” which may diminish your appetite by creating distention in your belly, she added.

Regardless of what type of water you prefer, each day aim to drink about half your body weight in ounces, with most of that being flat water, Ms. Schuchmann said. For example, if you weigh 150 pounds you should drink around 75 ounces of water to stay hydrated.

Something else to keep in mind: Many people assume club soda and seltzer water are interchangeable, however club soda usually has sodium.

“For someone watching their blood pressure, that is something to take into consideration,” Ms. Schuchmann said. “It depends on what the rest of your diet looks like and how much sodium is coming from other sources.”