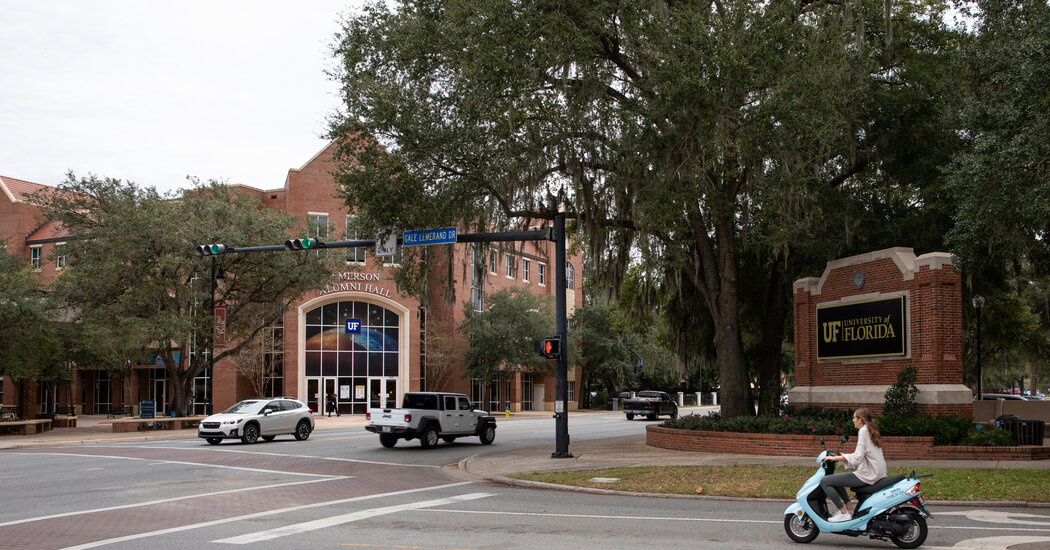 Three University of Florida professors have been barred from assisting plaintiffs in a lawsuit to overturn the state’s new law restricting voting rights, lawyers said in a federal court filing on Friday. The ban is an extraordinary limit on speech that raises questions of academic freedom and First Amendment rights.

University officials told the three that because the school was a state institution, participating in a lawsuit against the state “is adverse to U.F.’s interests” and could not be permitted. In their filing, the lawyers sought to question Gov. Ron DeSantis, a Republican, on whether he was involved in the decision.

Mr. DeSantis has resisted questioning, arguing that all of his communications about the law are protected from disclosure because discussions about legislation are privileged. In their filing on Friday, lawyers for the plaintiffs said the federal questions in the case — including whether the law discriminates against minority groups — override any state protections.

The university’s refusal to allow the professors to testify was a marked turnabout for the University of Florida. Like schools nationwide, the university has routinely allowed academic experts to offer expert testimony in lawsuits, even when they oppose the interests of the political party in power.

Leading experts on academic freedom said they knew of no similar restrictions on professors’ speech and testimony and said the action was probably unconstitutional.

A spokeswoman for the university, Hessy Fernandez, defended the prohibitions, saying in a statement that the school “has a long track record of supporting free speech and our faculty’s academic freedom, and we will continue to do so.”

She added: “The university did not deny the First Amendment rights or academic freedom” of the professors, she said. “Rather, the university denied requests of these full-time employees to undertake outside paid work that is adverse to the university’s interests as a state of Florida institution.”

Mr. DeSantis’s office did not immediately reply to a request for comment.

One of the professors in the latest filing, Daniel A. Smith, testified with the University of Florida’s permission in two voting rights lawsuits against Florida’s Republican-led government in 2018. One suit forced the state to provide Spanish-language ballots for Hispanic voters. The other overturned a state-imposed ban on early-voting polling places on Florida university campuses.

But university officials reversed course after a coalition of advocacy and voting rights groups sued in May to block restrictions on voting enacted this year by the Republican-controlled State Legislature. Among other provisions, the new law sharply limits the use of ballot drop boxes, makes it harder to obtain absentee ballots and places new requirements on voter registration drives.

Among other claims, the plaintiffs argue that the law disproportionately limits the ability of Black and Hispanic voters to cast ballots.

In rejecting Dr. Smith’s request, the dean of the university’s college of arts and sciences, David E. Richardson, wrote that “outside activities that may pose a conflict of interest to the executive branch of the state of Florida create a conflict for the University of Florida.” A university vice president overseeing conflicts of interest issued the other two rejections.

One lawyer for the plaintiffs in the case, Kira Romero-Craft, said that reasoning “goes against the core of what the University of Florida should stand for in terms of academic freedom.”

“It seems reasonable for us to understand whether the executive office of the governor had any role in participating in that decision,” she said.

“The whole purpose of a university and academic freedom is to allow scholars free rein to conduct research,” said Mr. Reichman, a professor emeritus of history at California State University, East Bay. “The ultimate logic of this is that you can be an expert in the United States, except in the state where you’re actually working and being paid by the state.”

Robert C. Post, a Yale Law School professor and expert on academic freedom and the First Amendment, said he knew of no other case in which a university had imposed prior restraint on a professor’s ability to speak.

Why the university reversed its position is unclear, but the professors’ demand to question Governor DeSantis appears aimed at discovering whether the school’s administrators acted under pressure.

The state’s new voting restrictions were a priority for Mr. DeSantis, who signed them into law before a crowd of supporters of former President Donald J. Trump in a ceremony broadcast by Fox News. Local reporters were barred from the event.

The governor had earlier described the 2020 election as the most efficient and secure in Florida’s history, but said he was calling for stricter voting rules because “we cannot rest on our laurels.”

Mr. DeSantis has close allies at the University of Florida. The head of the school’s board of trustees, Morteza Hosseini, is a major Republican Party donor and DeSantis adviser who co-chaired a transition team formed after the governor’s victory in 2018.

The two men made headlines this week when The Gainesville Sun reported that Mr. Hosseini, who is known as Mori, had arranged this fall for the University of Florida to hire and grant tenure to a controversial U.C.L.A. professor, Dr. Joseph Ladapo, in only two weeks. Mr. DeSantis quickly named Dr. Ladapo as the state’s surgeon general.

Dr. Ladapo’s views on Covid-19 protections such as vaccinations and masking are in line with Mr. DeSantis’s but sharply at odds with federal guidelines. His first act in the post was to ban Florida schools from quarantining students exposed to Covid-19 as long as they show no symptoms of illness.

In an Oct. 13 letter to university officials, the legal director of the American Civil Liberties Union’s Florida branch noted that Mr. DeSantis had signed legislation this year requiring universities to annually assess the state of academic freedom and ensure that students hear a variety of viewpoints, including those they disagree with.

Barring the professors’ testimony goes against those very tenets, the letter stated, adding that the university “simply should not be looking to Governor DeSantis to decide which speech activities it will engage in. That is precisely the opposite of the values that universities are thought to stand for.”