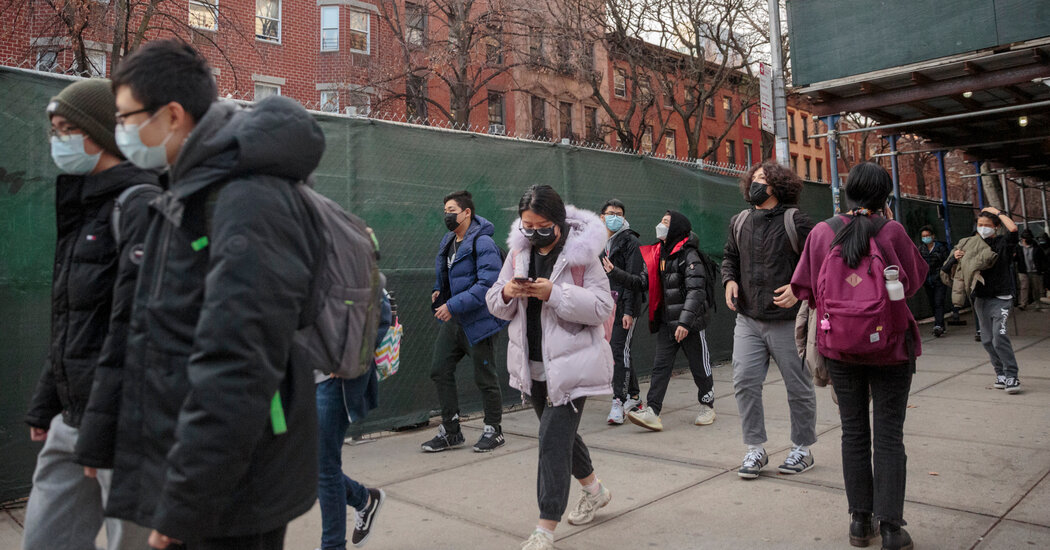 Connecticut will permit students and staff members to stop wearing masks in schools by no later than Feb. 28, after Gov. Ned Lamont recommended Monday that the statewide mask mandate end on that date.

His remarks came after a move by New Jersey officials earlier Monday to lift that state’s mask mandate for schools.

The governors of Delaware and Oregon also made announcements on Monday about relaxing mask mandates at the end of March. And California officials said that state’s universal mask mandate for indoor public places would be lifted next week.

“Now is the time for us to say, the statewide mask mandate is no longer at our level,” Governor Lamont of Connecticut said. “Each and every mayor, each and every superintendent can make that call themselves. I recommend the date Feb. 28.”

Connecticut’s mask mandate for schools will expire next Tuesday unless the legislature agrees to extend the governor’s pandemic emergency powers. One of those powers allows officials from the Department of Education and the Department of Public Health to decide rules around masks.

Governor Lamont last month asked the legislature to extend some of the orders he issued using his emergency powers, but no decision has been made.

If the legislature extends the powers, he said, “we would have the discretion to make the change we’re talking about, which is ending the mask mandate in schools and our day care facilities.”

The governor decided against letting the mandate end next week so that officials could continue monitoring cases if there is another spike in cases. He also wanted the change to occur after winter break, so schools could better prepare.

Coronavirus metrics in New Jersey have been on the decline, too, prompting Gov. Philip D. Murphy to announce on Monday that he would eliminate the state’s mask mandate for students and school employees. The new policy will take effect the second week of March.

Gov. Kathy Hochul of New York said last week that officials were “striving” to remove mask mandates in schools, but that vaccination rates for younger children needed to rise.

“The more children we have vaccinated, the safer they’ll be when they go to school,” Governor Hochul said. “We’re just not there yet.”

In appearance on Monday in Kingston, N.Y., she said that she was still monitoring the situation and noted that New Jersey’s mandate would not be lifted for another month.

In California, the most recent mask mandate, which required masks in indoor public settings regardless of vaccination status, was put in place in mid-December, amid uncertainty around the Omicron variant, and was set to remain until Jan. 15 at least. As case counts exploded, stretching essential work forces, the state extended the mandate until Feb. 15. That’s when it will expire.

The rate for fully vaccinated New York residents ages 5 to 11 is 30 percent; that age group became eligible to receive a Covid-19 vaccine in early November. That rate for children ages 12 to 17 is 70 percent, according to federal data.

A spokesman for the New York City Department of Education said Monday that the city’s mask mandate for schools, which is separate from the state requirement, remained unchanged. The city will decide what to do with its mandate based on what happens on the state level, the spokesman said.

As of Sunday, the daily average of new virus cases in New York had dropped 69 percent statewide over a 14-day period, according to a New York Times database. Hospitalizations had decreased by 42 percent and deaths had fallen by 39 percent over the same period.

New York’s statewide rule requiring masks or proof of full vaccination for all indoor public places is currently set to expire on Thursday. The state has a separate mask mandate for schools, which was put in place last August, before the mask-or-vaccination order was issued. That mandate expires Feb. 21, but it is expected to be renewed, according to a spokeswoman for the State Department of Health.

The governor of Delaware, John Carney, extended his state’s school mask mandate on Monday, to remain in effect through March 31, saying that would give parents time to get younger children vaccinated. At the same time, Governor Carney announced that the state’s mask mandate for businesses and workplaces would expire on Friday.

Masks protect both the wearer from infection, and those nearby from being infected. People who reported always wearing a mask indoors in public were less likely to test positive for the virus, according to a report released Friday by the Centers for Disease Control and Prevention. Two September C.D.C. studies found that masks help prevent in-school transmission. The agency recommends that children 2 and older and all adults wear masks at school and in day care.

But many prominent doctors have begun to question the value of requiring students to wear masks as new virus cases decline across the country. They cite the mental health strain that children have faced during the pandemic, and the educational value of seeing full faces.