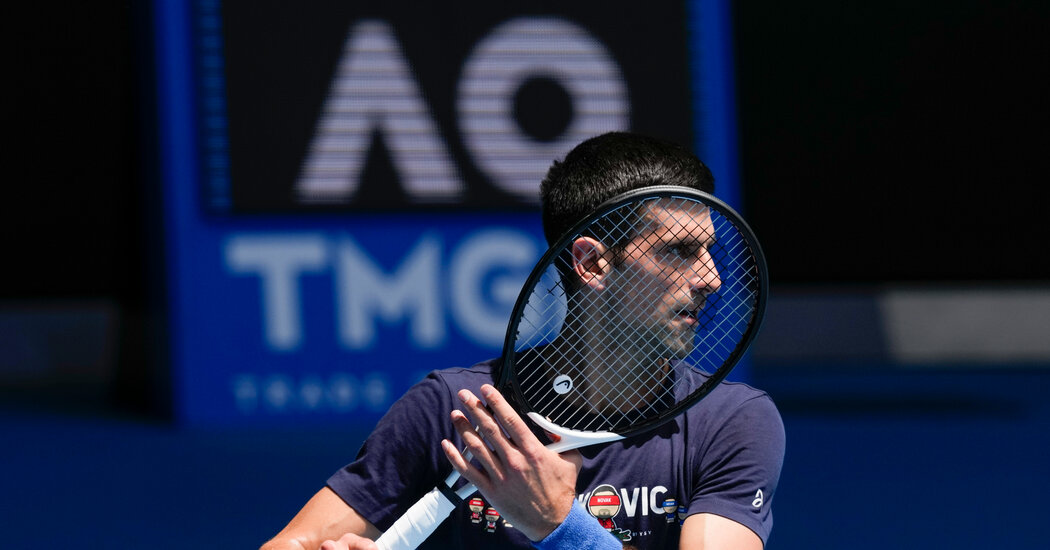 Update: A panel of judges ruled on Sunday that Australia’s immigration minister was within his rights to cancel the tennis champion Novak Djokovic’s visa. The judges’ ruling is final; the Australian Open begins Monday.

MELBOURNE, Australia — Novak Djokovic has had his visa to stay in Australia revoked — not once but twice. After a successful appeal of his apprehension at the border by authorities, our immigration minister has affirmed the initial refusal. The world’s No. 1 men’s singles tennis player is out of the Australian Open (at least for now).

It’s a move that the local papers have claimed will “undoubtedly prove popular with the Australian public.”

So, Novak. Mate. Don’t let the door hit you on the way out, hey?

Australians may well be exhausted from two years of the pandemic and sick and weakened by a current mass infection of Covid-19, and yet many of us retain enough energy to be thrilled by this news.

The hashtag #DjokovicOut has been a trending topic here for days. A poll conducted by a local media organization reported a staggering 83 percent of 60,000 respondents were in favor of Djokovic’s booting. Two major network news anchors were caught on hot mics using at least 10 expletives to discuss the issue. This would usually provoke some social sanction, but given that the expletives in question were used to describe Djokovic, both news anchors have since become national heroes.

And yet none of the acrimony is about tennis. It is entirely about Australia’s experience of the pandemic, the growing policy failures of Prime Minister Scott Morrison’s government and the current out-of-control spread of the Omicron variant here.

Within this context, an otherwise skilled sportsman has made himself a cackhanded symbol of everything presently enraging Australians. His first mistake was to align himself with the kinds of ideas Australians see in online misinformation campaigns from the anti-vax movement.

This is a man who once self-diagnosed a gluten intolerance by gripping some bread. He’s made claims that polluted water can be cleansed with the mind. He declared he was “opposed to vaccination” back in April 2020, before a vaccine was even available for the coronavirus.

Our social tolerance is also dwindling for those whose approach to public health is seen as selfish. (An extraordinary 90 percent of Australians are fully vaccinated.) Sports commentators reminded readers that when Naomi Osaka became unwell in 2021, Djokovic insisted that the press appearances she resisted were “part of the sport” — yet he’s conducted his current Australian misadventure around his own preferences, not his obligations to society.

Djokovic, a Serbian national, arrived in Melbourne on Jan. 5 to compete in the prestigious local Grand Slam event. He’s a legend of the tournament; he has won it a record nine times. A 10th victory at this year’s open would seal his sporting legacy as the winner of the most individual men’s Grand Slam titles in tennis history.

Instead, he’ll likely be deported.

His coy refusal to “be forced by someone to take a vaccine” may have made Djokovic a poster boy for a marginal local movement of anti-vaccine extremists, but it’s brought him into sharp conflict with the majority of Australians’ attitudes toward managing the virus.

When the pandemic took hold in March 2020, Australia’s federal government shut international borders to control its spread — but made no provision for the tens of thousands of stranded Aussies stuck overseas who wanted to come home. As Mr. Morrison dumped more pandemic management responsibilities onto the states, they enforced their own domestic borders. When these policies were combined with lockdowns, loved ones were separated for months at a time.

Only when states reached 80 percent vaccination rates were border protections relaxed — some as recently as only this week. The Morrison government’s failure to order enough vaccines for the population resulted in a rollout popularly referred to as a strollout. The process of social repair has been long and difficult.

So when ordinary Australians saw an unvaccinated tennis champion bragging on Instagram of a mysterious “exemption permission” that allowed him to traipse across the border, that went down like a lead balloon.

The champ who chose to thumb his nose at vaccination struck powerfully as a symbol of the contrarianism that has now frayed our once united national pandemic response. Just a few weeks before Djokovic’s arrival, the conservative government of New South Wales, Australia’s most populous state, abandoned contact tracing, mask mandates and other pandemic protections — precipitating a wave of Omicron that was crashing across the entire east coast and prompting the reintroduction of restrictions just as Djokovic landed in Melbourne.

The government’s insistence that citizens could take “personal responsibility” for their health was not only contradicted by Djokovic and his hazy trail of post-positive-test encounters; it was also somewhat undercut by the government’s failure to provide nearly any means to do so.

Supplies of crucial booster vaccines were, again, not ordered in time to counter the wave. Public testing centers were shut to meet backlogs as positive cases overwhelmed them, yet the government decided the alternative of rapid antigen tests should be a matter of retail sale. While Australian-based test manufacturers fulfill supply for other countries, price gouging has run rampant in the domestic market, and the precious test kits have become impossible to find.

Denied tests, unaware infected people spread Omicron further, straining both the health system and supply chains as more and more workers fall sick. Australia, whose high social compliance with lockdowns and vaccination kept us safe from Covid for so long, now has one of the highest infection rates in the world. KFC is running out of chicken, and supermarket shelves are bare. School reopenings have been delayed. Employees are being sent to work sick. The federal government is now reportedly forcibly acquiring supplies of rapid antigen tests from the businesses and service organizations that it had told to find their own.

Of course, while Australian Twitter may name him “Novax Djocovid,” no local holds the tennis player responsible for our crisis. His unsatisfactory paperwork fails stated visa requirements, and that is reason enough for its revocation.

But to understand the rage unleashed by Djokovic, one has to recognize the similarities between his behavior and that of our government. First, there is their shared failure to treat the threat of the virus’s transmissibility seriously. Then there are the obfuscations, contradictory statements, blame shifting and inherent belief that rules only apply to other people, which characterize months of government mismanagement of the crisis. There’s a familiar pattern of government miscommunication and ineptitude unfolding around Djokovic that sadly reminds us of our brief and squandered advantage over the virus.

It’s notable that the immigration minister who refused Djokovic’s visa did so in the news graveyard of after 5 p.m. on a Friday. This was curious timing. With an election looming, the Morrison government is desperate, perhaps, to feed Australians a scapegoat for our fury — but without the courage to expose that desperation to our scorn.

Van Badham (@vanbadham) is a columnist for The Guardian Australia and the author of the book “QAnon and On: A Short and Shocking History of Internet Conspiracy Cults.”

The Times is committed to publishing a diversity of letters to the editor. We’d like to hear what you think about this or any of our articles. Here are some tips. And here’s our email: letters@nytimes.com.