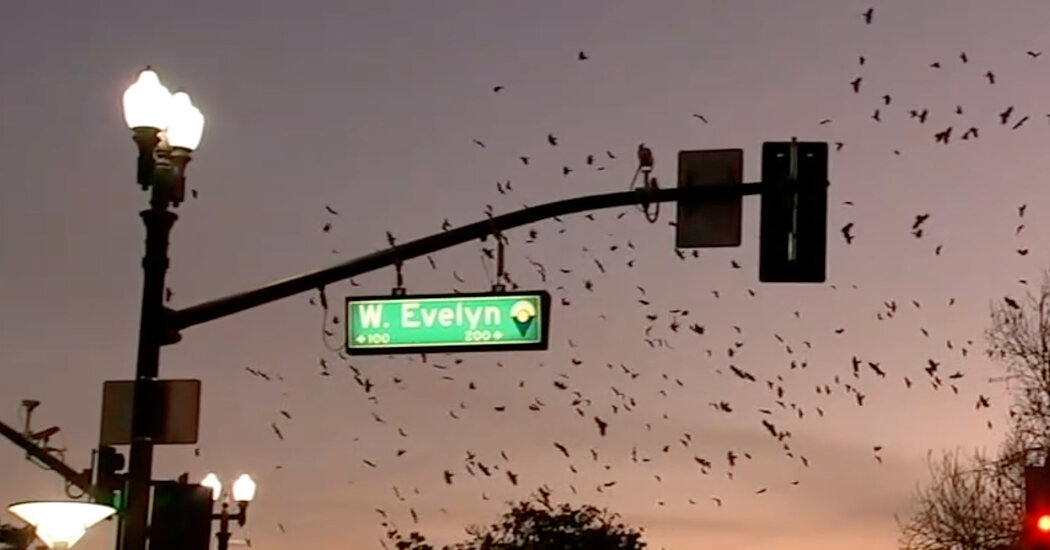 The downtown of Sunnyvale, Calif., has been bustling since the coronavirus pandemic started. More than a thousand visitors have enjoyed a night on the town practically every evening for almost two years.

But they do not come to slurp ramen or drink beer at the gastro pub. They eat whatever scraps they can find outside. Then they defecate all over the sidewalks.

They are the unwelcome guests nobody invited: crows. And now the city is turning to an unlikely weapon to disperse them: lasers.

The city authorities have struggled to get rid of the birds for at least the past five years, but the situation became dire during the pandemic, when the crow population mushroomed, said Larry Klein, the mayor of Sunnyvale.

“The streets are basically riddled with crow poo,” he said on Sunday.

It is not just the streets that are overwhelmed in Sunnyvale, which is about 40 miles southeast of San Francisco. Crows have sometimes dropped sticks or leaves or feces onto outdoor diners, Mr. Klein said.

In an effort to disperse the birds, the city this month will turn to a tool befitting its Silicon Valley setting: a $20 laser. The city authorities already tried chasing the crows away with a falcon, but they had only “limited success,” the mayor said.

It may sound like a futuristic solution but lasers have been proved to scare away crows. In New York State, Rochester and Auburn have used lasers to repel the birds with some success.

For three weeks, Sunnyvale employees will spend an hour every evening shining a green laser at crows, Mr. Klein said. They will also use a boombox to play sounds of crows in distress.

“The biggest thing is to harass them enough so a large percentage of them find new homes,” Mr. Klein said.

The crows gather downtown around dusk, after they have spent the day foraging for food.

When crows see a green laser shining in the trees at night, they think animals are running over the branches, said Kevin J. McGowan, an ornithologist at the Cornell Lab of Ornithology in Ithaca, N.Y. They will fly somewhere else to sleep.

But crow dispersal is a tricky game, because some of the birds do not want to leave a place where they have already settled, said Dr. McGowan, who has studied crows for more than 30 years.

He suggested that the Sunnyvale authorities also aim firecrackers and bottle rockets at the birds, which will make them “freak out,” he said.

Even after all that effort, the crows may not want to leave, Dr. McGowan said. He cited an example in Auburn, where the authorities in the 1990s relocated around 75,000 crows to less crowded areas. But they still gather in parts of the city.

“They’re like teenagers and Covid,” he said. “You can’t stop them getting together.”

However, not everyone supports Sunnyvale’s laser plans. Mr. Klein said that the Santa Clara Valley Audubon Society, a local environmental group, believes the laser has the potential to harm the birds.

Compared with flocks in other cities, Sunnyvale’s 1,000 crows are “a moderate roost,” said Kaeli Swift, a postdoctoral researcher at the University of Washington who has studied crows.

Cities across the country have contended with rising crow populations over the past few years, but such influxes have nothing to do with how the pandemic has emptied the streets, Dr. Swift said.

“Roosts move around — we don’t exactly know why,” she said, adding that roosts grow larger in the winter, when crows migrate from Canada.

It appears that the crows may never totally vacate Sunnyvale. The only methods that could get rid of all of them are illegal, such as blasting crows with dynamite, as the Illinois authorities did in 1940 when they killed more than 300,000 birds.

Despite the growing numbers of crows, Sunnyvale’s human residents do not need to worry about their health, Dr. McGowan said.

“You’d have to lick all the crow droppings on a park bench to come even remotely close to catching something from a crow roost,” he said.