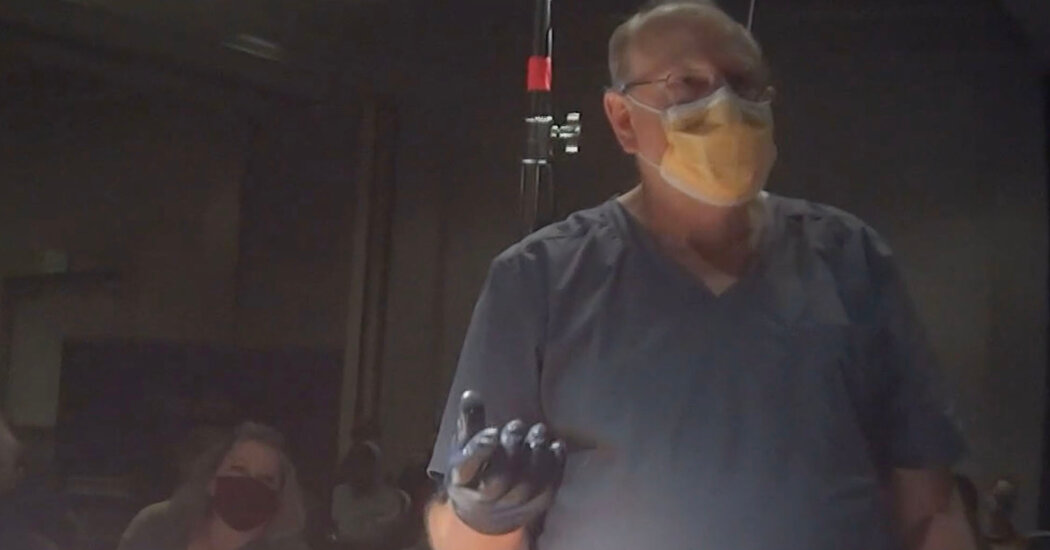 The blurred video showed a cadaver on a table in a hotel ballroom. A man stood over the body, addressing an audience that had paid to watch the dissection of a corpse. Some people snapped on gloves and hovered, peering and touching.

This was the body of David Saunders, a 98-year-old Louisiana man. It was not, his wife said, what she intended when she donated his body for medical research after he died of Covid-19 in August.

“My impression, it was strictly for medical science, not that his body would be put on display,” Mr. Saunders’s wife, Elsie Saunders, said in an interview. Describing the event as “morbid,” she said she had learned about it through news reports and was “trying to get myself together.”

The dissection was reported last week by King 5 News, a Seattle television station that said a journalist had attended the event. The station published footage from the hotel, in Portland, Ore., saying audience members had paid up to $500 each to attend.

“Five hundred a seat for people to watch — this is not science, this is commercialism,” Mrs. Saunders said.

Her husband’s body was blurred out in the footage, although at one point it appeared that a man directing the dissection was holding body parts in his hands and arranging them on a surface.

A Showpass page advertised the Oct. 17 event as a “cadaver lab” class, “brought to you by” a company called Death Science and a second organization, the Oddities & Curiosities Expo.

Kyle Miller, who until Thursday acted as a spokesman for Death Science, said in an email on Wednesday that the company sold tickets to the general public. Seventy people attended a “workshop” where “participants were able to observe an anatomical dissection on a full human cadaver,” he said.

Jeremy Ciliberto, the founder of Death Science, said his goal was to “create an educational experience for individuals who have an interest in learning more about human anatomy.”

“We understand that this event has caused undue stress for the family and we apologize for that,” he said.

Lt. Nathan Sheppard, a spokesman for the Portland Police Bureau, said detectives had consulted with the Oregon Department of Justice and the Multnomah County District Attorney’s Office. He said the office had concluded that, though the dissection may have violated civil law, there were “no criminal laws which directly speak to such circumstances.”

The Oregon Department of Health did not respond to requests for comment. Kimberly DiLeo, the Multnomah County chief medicolegal death investigator, said that the brain and organs had been removed during what she described as a public “pay-per-view event.”

“It is completely immoral and unethical,” she said. The county leadership, she said, “is actively looking into” whether it violated any laws.

Martin McAllister, the general manager at the hotel, the Portland Marriott Downtown Waterfront, said in an email that his team was “grossly misled by the client about the nature of this event.”

Mrs. Saunders said that, after her husband died, she tried to donate his body to Louisiana State University’s medical school. But she said the school declined the body because he had died of an infectious disease.

She then turned to a Baton Rouge funeral home, which referred her to Med Ed Labs in Nevada, an organization that says it provides cadavers to military, government, commercial and nonprofit organizations.

“At no time did they tell me they were going to resell his body,” Mrs. Saunders said, referring to paperwork she signed with Med Ed Labs. “Under no circumstances would I have my husband’s body put on display.”

Med Ed Labs denied any wrongdoing, saying that Mrs. Saunders had given her consent for the body to be donated.

In a statement on Friday, it said it had “no knowledge that people would be paying to attend a show featuring one of our donors.”

It said the person who conducted the dissection was a “certified anatomist,” describing him as a former University of Montana professor who handled the remains with “utmost respect” and took questions from people in the audience “representing themselves as students, anthropologists, and therapists.”

Mr. Miller said on Wednesday that Death Science puts on educational courses and events for the public in fields such as forensics and anatomy. A similar event had been planned for Oct. 31 in Seattle, but was canceled. Med Ed Labs and Death Science had dissolved their partnership, he said.

On Thursday afternoon, Mr. Miller said his own “engagement” with Death Science had ended.

The Oddities & Curiosities Expo processed tickets, Mr. Miller had said, with prices ranging from $100 to $500.

In an email, Oddities & Curiosities Expo did not say whether it processed tickets. It said that Death Science was the host and organizer, and that the event did not take place at one of its expos. At a separate venue, the Expo said, Death Science was a vendor “selling their art.”

Mr. Miller said Death Science did not have access to any personal records, including the donation agreement.

He said Med Ed Labs provided the cadaver, the tools and the anatomist who conducted the class. It booked the Portland hotel venue and was aware that the attendees were “not exclusively medical students,” he said.

Obteen Nassiri, the manager of Med Ed Labs, said in an interview this week that the organization had thought the body was to be used for medical education for students and medical practitioners. He said Death Science had contacted the lab saying it needed a cadaver to “teach students anatomy.”

“We did some preliminary research and they were trying to teach students about the science of death,” he said. “I believed the body would be utilized for anatomical dissection and teaching purposes.”

Med Ed Labs procured the body from the Baton Rouge funeral home and shipped it to Las Vegas and then to Portland, he said.

Mr. Nassiri said that he had spoken to Mrs. Saunders on Wednesday.

“She was extremely upset this company went behind us and sold tickets for this event to people who were not medical staff and students,” he said.

Death Science had paid about $10,000 for the entire event, including the use of the cadaver, its transport and the staff, he said. The body has since been sent back to Las Vegas en route to Louisiana. Mr. Nassiri said Med Ed Labs would pay for its cremation and an urn.

The Seattle news report, which spread to national and international outlets, quickly provoked outrage, echoing previous controversies around the handling of human remains in public settings.

Last year, protesters gathered at the University of Pennsylvania over how anthropologists had handled the bones of a young bombing victim. The bones were featured in a video for an online course, “Real Bones: Adventures in Forensic Anthropology.”

In 2015, Edinburgh University “divided opinion” by holding workshops introducing the public to “cadaveric material,” according to Carla Valentine, a curator at the University of London pathology museum.

A decade earlier, when the “Bodies” exhibition opened in New York City, the company that ran the exhibition was criticized for using cadavers from China. It admitted it could not prove the bodies were not those of prisoners who might have been tortured or executed.

Rina Knoeff, a professor at the University of Groningen in the Netherlands who studies the history of medicine, said that public dissections as entertainment dated at least to the Renaissance.

“I think it’s maybe the same sort of sentiment that also drew people to public executions,” she said. “It’s maybe the thrill of sitting there and watching somebody being cut into pieces.”