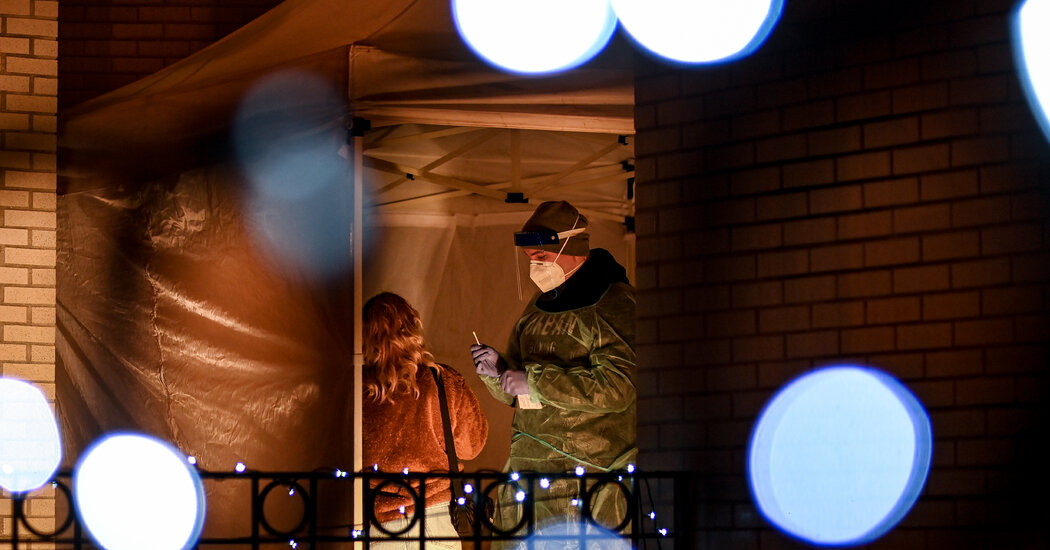 Across the country, workers were steeling themselves for months of disruptions to come.

“I’ve been working through most of the pandemic, and I hadn’t tested positive before Omicron,” said Amelia Smoak, 29, who works at a restaurant and bar in Manhattan’s East Village neighborhood. She is fully vaccinated but recently recovered from a mild case of Covid. She added that business has gotten far slower as case counts rise: “Tips have been stable, but head count went down drastically.”

Scientists are projecting that the country’s sharp increase in cases will crest by the middle of January. But much about the new variant remains uncertain, and experts remain worried that hospitals might be overwhelmed.

The number of cases in New York continues to rise steeply, yet city school officials have vowed to keep schools open, embracing increased testing as an alternative to closing classrooms.

Schools in Chicago, Washington and most other major cities have announced they also plan to reopen this week, many with increased testing regimens. But some districts — including public schools in Cleveland; Prince George’s County, Md., a suburb of Washington, D.C.; Newark, N.J.; Mt. Vernon, N.Y.; and Jersey City, N.J. — will transition to remote learning for one week or more in January.

In Chicago, where businesses have remained open as cases have spiked to their highest levels of the pandemic, public school leaders said they planned to return to class as scheduled on Monday despite concerns from the city’s powerful teachers’ union about safety precautions.

“If they shut down the restaurants, they shut down all the events, every component of the city and state, then hey, I’m not going to put my families at risk, I’m not going to force them to take their children to school,” said Pedro Martinez, the chief executive of Chicago Public Schools. He added: “But short of that, what is the logic of thinking that somehow shutting down schools is going to help this pandemic? I don’t see the logic.”