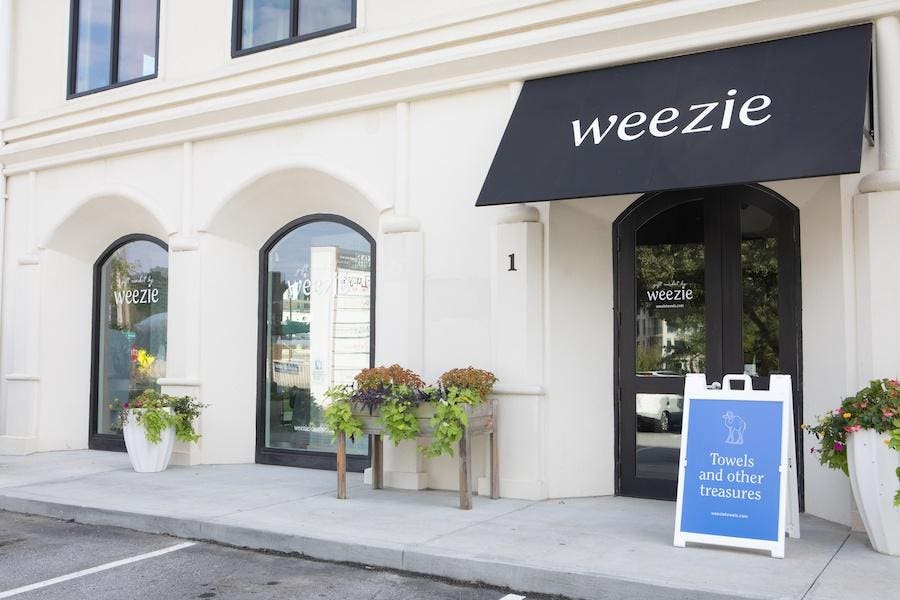 Luxury towel startup Weezie just celebrated its third anniversary with the opening of its first brick and store called “The Gift Market by Weezie.” This is perfect timing considering how concerned consumers are with shipping delays this holiday season. It’s likely many people will find it easier to go to a physical retail location instead of clicking “add to cart.”

But the store isn’t the only reason co-founders Liz Eicholz and Lindsey Johnson are celebrating. Since its launch, the Atlanta-based company has sold approximately 300000 towels and robes. With revenue doubling year over year, nearly twenty corporate employees, and over 40 fulfillment employees, it is fair to say that Weezie is drying off the competition.

But, Weezie’s success isn’t exactly a surprise. The towels are of superior quality and have a different feel than other luxury towels on the market. Made from 100 percent organic long-staple cotton, the fabric is uniquely woven in a way that traps air into every single fiber. That air pocket makes the towel just as absorbent is it soft and fluffy. They also stay that way, wash after wash.

What else sets Weezie apart? Not only do they offer ten different style monograms, but they also have a choice of pipping in ten colors as well. Whether a bathroom is modern, contemporary and or even traditional, there’s a Weezie towel to elevate it.

In addition to towels, Weezie also has bathrobes in a variety of styles for women, men, and children. There’s even a collaboration in this category with renowned print brand Roller Rabbit.

The Gift Market By Weezie

Located at 56 East Andrews Drive in Buckhead, the founders had been looking for a brick and mortar location for quite a while. Johnson tells me, “We had our eyes out over the past nine to twelve months. When a space became available, we had to move quickly.”

Light and airy, the sunlight flooded store features arched windows and has charm in spades. Created by Atlanta-based designer Anna-Wooten Loggins, it features elements from a variety of local and female-founded companies.

The curtains and floral print wallpaper were sourced from Pepper, which was founded by fellow Columbia Business School alumna Erin Banta. “The beautiful blue curtains are very Weezie. The wallpaper is stunning. It was really fun to work with them,” says Johnson.

There is a sitting area inside the store with chic blue chairs from The Inside, chandeliers from Savannah’s Cira Lighting, and stylish hardware from LuxHoldUps. The store also features Savannah-based artist, Kate Mullin Williford, as its artist-in-residence.

In addition to Weezie’s products, the shop also sells curated gifts from other brands.

Johnson tells me, “We have everything from cocktail napkins to table linens to candles and candlesticks, to soap pumps, soap dishes, and art. There are also holiday cards [along with] a ton of different things to shop from.”

In addition to the store, Weezie also launched several new products in recent months including solid-colored towels made of a classic terrycloth material. Navy, grey, light blue, and light pink colors are available. Patterned hand towels and bathmats are also new offerings for the brand.

Although the current location is meant to serve holiday shoppers and only has a short-term lease, Johnson says it could lead to something more permanent. “I think if our customers are demanding it, we’d love to keep it open. But I could also see us go into another city, even if it is a smashing success. Why not try something else? You know, whether it be Dallas or California or somewhere else outside of Atlanta could be fun.”