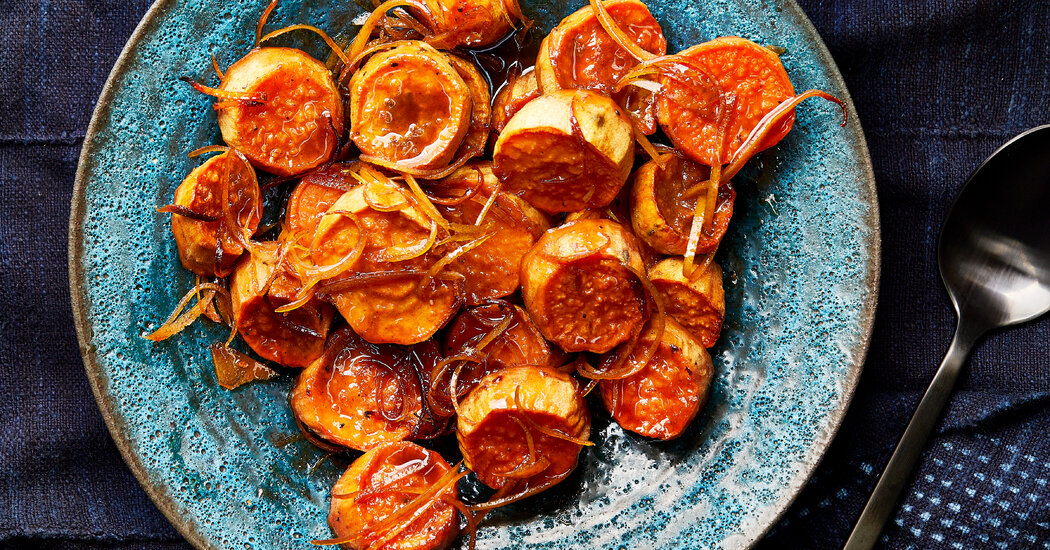 Roast turkey is not and has never been my passion, but I have come to love Thanksgiving.

Adjusting to life in the United States as a young immigrant from Nigeria, I felt compelled to master spoken and unspoken ceremonies surrounding American holidays. But Thanksgiving is perhaps the one American cultural tradition that felt perfectly familiar to me. In Nigeria, a country with multiple growing seasons, regional harvest festivals are celebrated throughout the year. Historically, whatever was ripe and ready was hailed in many forms: in soups and stews such as afang soup, and in porridges such as asaro and ubek, to name just a few.

My embrace of Thanksgiving is really an embrace of the people who I’ve celebrated it with. I’ve lived on a separate continent from my parents for more than two decades, so my friends and my chosen family have really helped shape my idea of the holiday.

In my first years in the United States, I spent Thanksgiving at my friend Charlene’s Baltimore home, where I would work beside her in the kitchen, preparing for the evening’s elaborate meal. On the surface, these first few dinners seemed to embody a straightforward set of customs. The food varied only slightly year to year, and the timing was roughly the same. But, over time, I began to see the deeply open and adaptive nature of the holiday.

The dinners have offered an opportunity to share time with loved ones, but also to learn from them. At Thanksgivings in Maryland, Georgia, Alabama and New York, I have often asked my hosts to share what makes their traditions special, and collected the recipes that resonated with me. Those dishes have made their way into my own celebrations, so that my holiday is one of enthusiastic food memories.

I have since made memories with my own small family: my husband and daughter. Two years ago, we spent Thanksgiving on a ranch in West Texas. We had tamales, chilaquiles, Christmas lima beans, a smoked turkey we bought at a supermarket, and a pork shoulder we smoked ourselves. We also had a heaping platter of jollof rice infused with Hatch green chiles.

In a way, I’m like a lot of Americans who have moved around, incorporating a Louisiana specialty or a New Mexican delicacy into their traditions. For me, I love a good skillet cornbread, with the flavor of toasted corn and a firm texture. It’s perfect with just a slathering of soft butter or used as a base for a dressing — with sausage, celery and lots of herbs, like the one first served to me in Charlene’s Baltimore home.

Or my mother-in-law Sue’s citrus-glazed sweet potatoes, which she has refined endlessly in her upstate New York kitchen. They add a tangy sweetness to the holiday meals we share.

These are such stellar sides that they fall into perhaps my favorite category of traditional Thanksgiving dishes: those that are memorable and delicious every other day of the year.