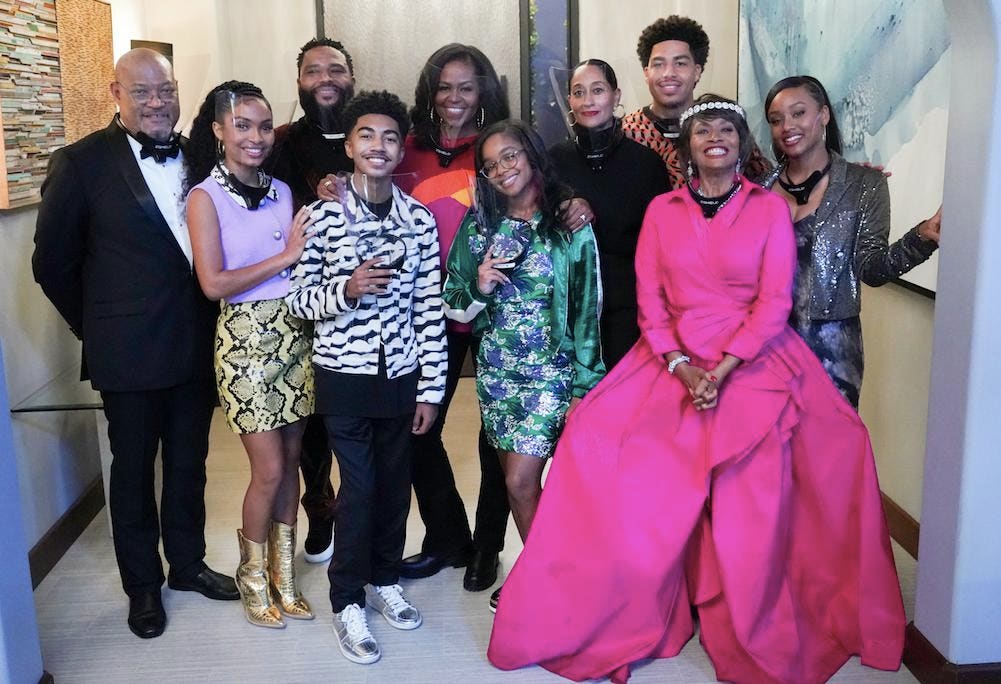 For the past seven years, black-ish has followed the adventures of the Johnsons, a Black family living in a predominantly white neighborhood as each member struggles to gain a sense of cultural identity amid society realities and pressures.

Black-ish has received critical acclaim throughout its run, with numerous Emmy and Golden Globe nominations, a TCA Award for Outstanding Achievement in Comedy, and a Golden Globe for Tracee Ellis Ross.

In the upcoming season premiere, entitled “That’s What Friends Are For,” Bow convinces Dre to attend a fundraising event for the organization When We All Vote in hopes to make some new couple friends (and to do their part in increasing participation in each and every election), but Dre is convinced there will be nothing but dud husbands there to befriend. Their expectations are far exceeded when the special guest for the evening is none other than Michelle Obama. To their surprise, the former first lady accepts an invitation for dinner at their house. But on the evening of the special meal, chaos ensues when the rest of the Johnson family tries to join in.

As the series enters its eighth and final season, the actors who’ve been with the show for the duration took a moment to reflect on what bringing narrative to a close means for them

First, Schribner says that the final season will continue in true Black-ish style, with the family marking special occasions, welcoming guest stars, and having crazy storylines.

But, the most important aspect of the series that will be included this season, says Schribner, are episodes that feature topics that people are afraid to talk about.

Throughout its run, the comedy series has feature episodes that shine a light on current events through the lens of the family members as they work to evaluate how each topic affects them personally, as well as society as a whole.

In the past, the series has touched on everything from voter’s rights to the use of derogatory slang words, as well as police brutality, paternity leave, and scams against the elderly.

Now, as the creative team has a planned ending for the series, Ellis Ross says, “I get to walk into this last season enjoying every stitch of it and being as appreciative as I’ve been for eight years but during the time you’re working it’s hard to always realize how exciting and wonderful it is. So, I’ve been taking it all in.”

Fishburn says that while everyone is excited about ‘the things waiting for them in the future,’ “anytime you close a chapter of your life it’s a little sad.”

He points out that as production ticks along the fact that the series is truly ending is becoming more and more of a realization for all involved.

With this in mind, Ellis Ross admits that she’s overwhelmed with emotion at the thought of the Johnson family breaking up – at least off-screen – as she says, “I left the [studio] lot the other day weeping.”

What has been a ‘pure joy,’ according to Fishburn, is watching the kids on the show grow up. “It’s been a gift to be a part of their journey.”

Now, both 21, Schribner and Shahidi were barely teenagers when the series began. Brown and Martin, now 16 and 17, respectively, hadn’t even hit double digits when they stepped into their roles.

Lewis says of the kids, “I used to swing them around. I can’t swing them anymore. They’re all grown up!”

She adds that overall, “We’ve had a great ride – singalongs, clowning between scenes.”

What everyone can agree on is that they’re all glad to be able to end the series the way they want to, with Shahidi saying, “It’s really beautiful… because I think we’ve watched the Johnson family grow in so many ways. We get to close it out in a way that feels good to us and in a way that honors the past eight years.”

Schribner teases that, “we tie up relationships and generational traumas that have been going on for seasons in a really nice way – not in a neat bow, because life is never really completely wrapped up, but we do get closure,” with Anderson adding that, “It feels great to be able to have the opportunity to complete the story and have a resolution.”

The season eight premiere of ‘black-ish’ airs Tuesday, January 4th at 9:30 e/p on ABC. Episodes are available on demand and Hulu the day following their premieres.