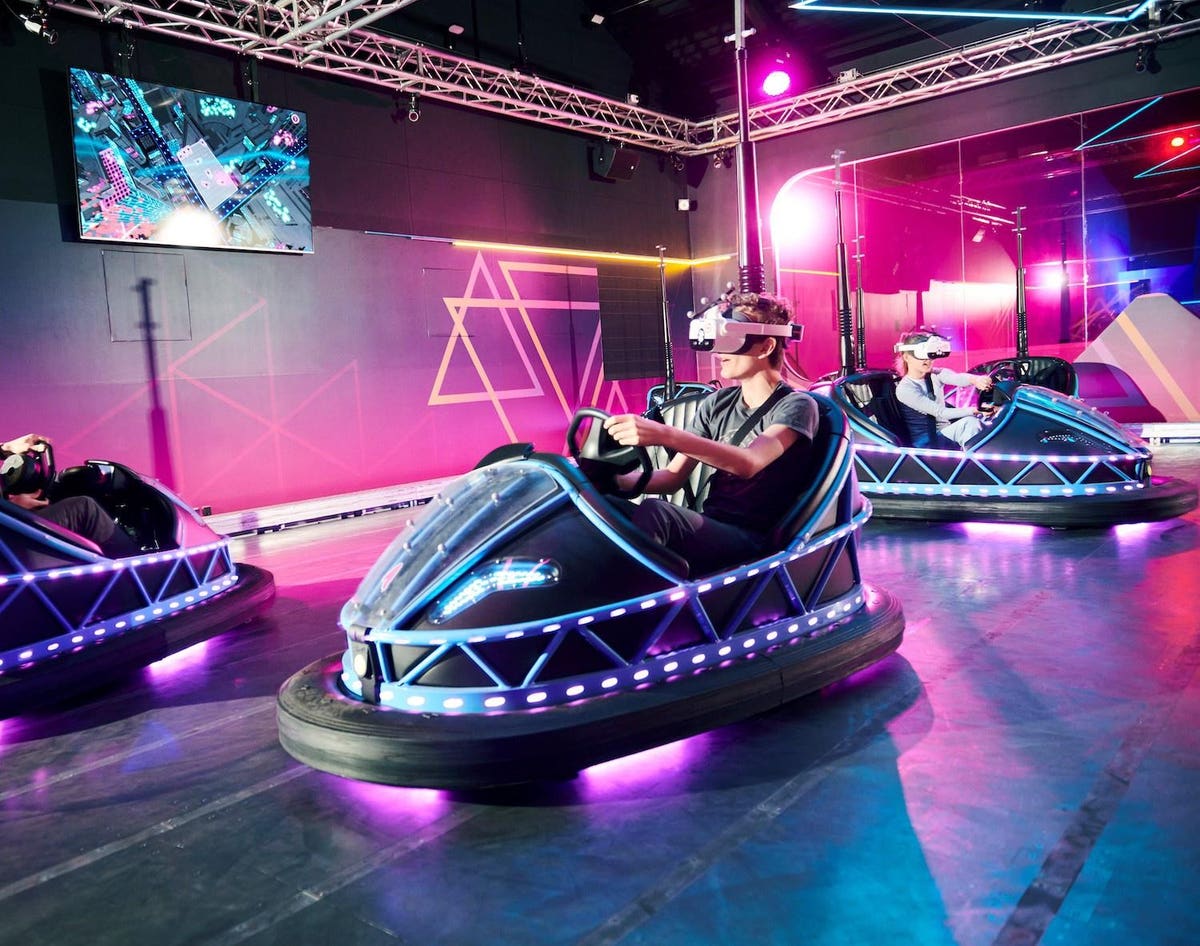 I ran into Jonathan Nowak Delgado, CEO of Location Based VR (LBVR) company, SPREE Interactive, on the floor of AWE in Santa Clara last week, where we were both invited speakers, one in many serendipitous meetings there. SPREE develops free-roam multiplayer VR attractions such as the SPREE Arena and VR Bumper Car systems.

LBVR is riding a tidal wave as pent up demand surges through the doors of Theme Parks, Family Entertainment Centers (FECs), and shopping malls worldwide. “Many of our clients are above pre-pandemic levels,” said Delgado. “We’ve experienced 250% revenue growth in the last two consecutive years. Our average operator client sold 3,500 weekly plays on one of our attractions this summer (2021), which is higher than in 2019.”

The bumper car system is SPREE’s fastest selling product, having already been installed in Universe Danfoss in Denmark, Schlosspark Thurn in Germany, Republika Mall in Ukraine, and several SALA Entertainment FECs in Saudi Arabia. SPREE will be offering the VR Bumper Car Upgrade to US clients at IAAPA. “We’ve sold 40 of our VR attractions, 30 SPREE Arenas, and 10 SPREE VR Bumper Car systems,” says Delgado. “With a solid pipeline for doubling that number in 2022.”

Delgado was on his way to Orlando for the International Association of Amusement Parks and Attractions (IAAPA) business show, which had over 75 VR attractions on the floor of the massive convention center in 2019. On the first day of the show this November, IAAPA reported it had 25,521 registered attendees, down from its record 42,000 in 2019. SPREE has its 20 player free-roam VR enclosure, SPREE Arena, on the floor at IAAPA this week, but it was not practical to build their biggest selling product, VR bumper cars (licensed by VR Coaster).

“The SPREE VR Bumper Cars is an awesome hybrid attraction,” says Bo Thørring Kulmbach, Project leader at Universe Danfoss. “It offers the classic bumper car experience blended with cutting-edge virtual reality technology. This blend brings the comfort of familiarity along with a whole new level of excitement and thrill. It is right up our alley, at Universe Science Park, to have mechanics, technology and physiology come to life in a virtual and yet visceral world.”

SPREE Interactive utilizes positional sensor fusion algorithms which ensures that players don’t collide while providing a smooth, latency free (no motion sickness) free-roam VR experience. They use Pico Neo standalone (no backpack or wires) with their own tracking system. SPREE develops content for the platform in-house and alongside curated partner studios like VR Nerds and Pixomondo, which helped create its multiplayer science VR adventure “Mission to Mars” as well as its VR bumper car experience “Cyber Blaster.”

The global VR gaming market is estimated to grow to $92.31 billion by 2027. Andreessen Horowitz’s $100M investment into SandboxVR, and Hollywood studio-backed Dreamscape VR, which has raised $68M, operate their own venues, a strategy that failed for The VOID. Unlike these two companies, SPREE Interactive is not an operator, it’s selling the attractions it invented to existing operators. SPREE has also developed education content targeting students that appeals to the growing education market.

Delgado and his co-founder, Dr. Stephan Otto, met while consulting the Fraunhofer Institut, MP3 birthplace and the biggest applied research lab in Europe. Exclusively commercializing the propritary sensor fusion patents, the spin-off completed a number of world’s first projects like the VR Roam & Ride tracking system for Europa Park’s Valerian coaster, and the tracking system for VR Bumper Cars at Erlebnispark Schloss Thurn (both in partnership with VR Coaster).

SPREE has previously raised two seed rounds totaling EUR 5M from German media giant ProSiebenSat.1. Media SE [ETR:PSM] in 2019 and in 2020 from investors including Sweden’s Qualisys and German-based Berendsen Holding in 2020. “After having sold my own company to Disney 15 years ago, I know what it takes for a company to become attractively scalable and profitable – and SPREE has the potential for both,” said Stephan Berendsen, Founder and Managing Director of Germany-based Berendsen Holding GmbH. SPREE is now raising a Series A round of financing to sustain its growth and global expansion.