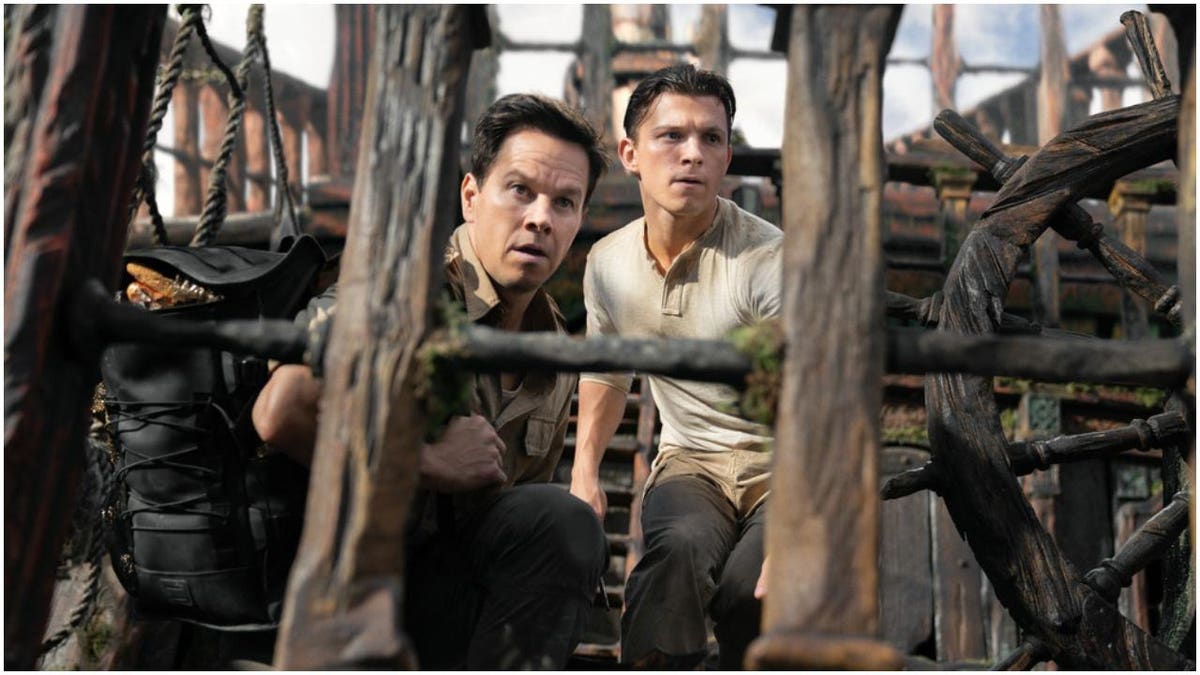 Sony released a 2.5-minute clip from Uncharted last night, offering up an extended excerpt from one of the film’s major action sequences. Fans of the third Uncharted video game (and, all due respect, Timothy Dalton’s The Living Daylights) will recognize the set piece involving a fight and shoot-out inside and just outside a mid-air cargo plane. Truth be told, it looks pretty solid, with lots of fisticuffs, stunts and bad guys falling to their deaths. Oh, and while the scene begins with Sophia Taylor Ali in a state of damsel-ed distress, she frees herself and does most of the onscreen murdering, so that’s nice.

Anyway, with Morbius pushed to April 1, the Tom Holland/Mark Wahlberg video game adaptation is Sony’s next theatrical biggie, opening over Valentine’s Day/Super Bowl weekend beginning February 11. Sony’s hope is that the star of Spider-Man: No Way Home will provide at least some star+character+IP interest in this long-gestating adaptation of the decade-old Naughty Dog action game series. That’s… optimistic at best, since audiences now go for characters and not the actors (see: Chaos Walking last March which starred Tom Spider-Man Holland and Daisy Star Wars Ridley), but even the potential of such a bump is amusing. Buckle up kids, it’s story time.

Once upon a time, 24 years ago no less, James Cameron’s Titanic embarked on an unprecedented box office rampage, sinking three months’ worth of small-scale theatrical competition. It legged out to $600 million domestic (and $1.8 billion worldwide) from a $28 million domestic debut in the same pre-Christmas weekend where No Way Home, Avatar, The Force Awakens, King Kong, The Fellowship of the Ring, The Hobbit and Avatar would eventually debut. One key reason why Titanic played so well for so long, topping the weekend box office charts for a record 15 consecutive Fri-Sun frames, is both due to the lack of competition and the heartthrob factor of one Leonardo DiCaprio.

That’s not to say that Titanic was only an Oscar-winning blockbuster because girls (and some boys) thought the Romeo & Juliet star was a dreamy hunk, although A) he was and B) there’s no shame in thirst-based entertainment consumption. One key problem with gender parity over the decades is that women are (generally) more willing to see a movie because the guy is a babe (think Freddie Prinze Jr. in She’s All That) while men do no such favors to the actresses they favor (think Sarah Michelle Gellar in Simply Irresistible). But DiCaprio’s icon-making performance (the very opposite of a tough-and-rugged romantic lead) certainly played a role.

That’s why it was quite amusing watching an otherwise doomed MGM release, The Man in the Iron Mask, become something of a hit in March 1998. The “Three Musketeers are old and embarking on one last adventure” flick, a kind of legacy sequel before its time, starred DiCaprio in the duel role of the evil king and his hidden identical twin brother. Sure enough, the Gabriel Byrne, John Malkovich/Jeremy Irons/Gérard Depardieu drama (with most of its swashbuckling coming right at the end) became the one film that came closest to dethroning Titanic between December 1997 and Lost in Space’s $20 million debut in the first week of April 1998.

Beyond folks actually seeing Uncharted because it stars the actor they liked in Spider-Man: No Way Home, Uncharted does have the advantage of its first or second trailer playing in front of every single theatrical showing of the Sony/Marvel sequel between now and February 11. In the proverbial olden days, the best marketing you could have was a solid trailer attached to a mega-hit movie. Think the Deep Impact teaser attached to Titanic, the first Percy Jackson teaser (highlighting its all-star cast) attached to Avatar or the DMV-set Zootopia trailer playing with The Force Awakens. This isn’t 2009 anymore, but the connection won’t hurt.

Of course, maybe in 2022 star power doesn’t mean a damn thing no matter if you just headlined one of the biggest-grossing movies of all time. If Nathan Drake is a marquee character and Uncharted has a butts-in-seats fan base, then having Holland in the lead may count as an added-value element (alongside Wahlberg, natch). Or maybe it’s doomed and all of the “Spider-Man means Tom Holland is a star” articles last month were no more plausible than the slew of “Deadpool means Ryan Reynolds is an A-lister!” posts from 2016. Uncharted opens February 18. We’ll see if any of that Peter Tingle rubs off on Nathan.