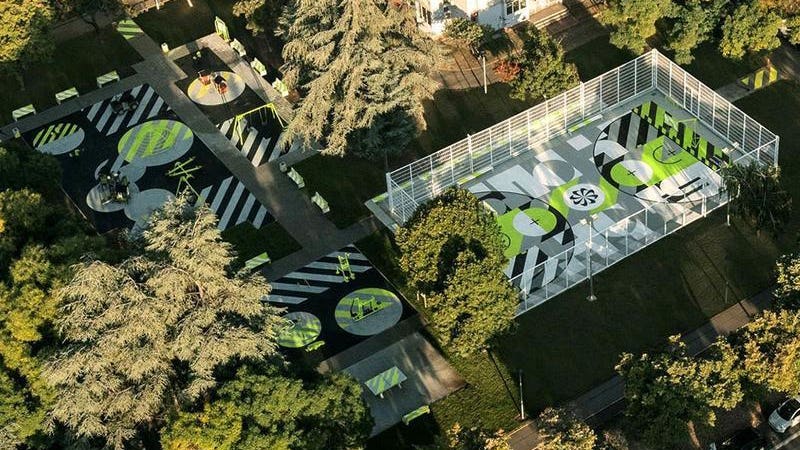 2021 was a carousel of contradictions for brand land. There was the glint of post-pandemic comeback but also the swelling specter of social disparity and deepening climate crisis, alongside formidable new virtual tech frontiers in need of seriously careful handling to keep their promise on a positive track.

From new metaverse maneuvers and navigating NFTs with integrity, to the power of ‘neighborgood’ brand design, advocating for the aftercare economy and a rising imperative to nurture ‘mental wealth’, here are 8 key progressive strategies to harness in 2022.

But the biggest shift, and long overdue, will be products, services, ads, and spaces supporting the 15% of citizens globally living with some form of disability.

Nike’s Go FlyEase adaptive shoe hit that product chord, while talent agencies like Zebedee are furthering nuanced representation. See also Prada’s joining of The Valuable 500 (the global consortium ‘radically transforming the business system for the benefit of people with disabilities’) and UK mobile network GiffGaff’s sign language ad by Stink Studios and, notably, one of its own customers.

Consider this a turbocharging of brand purpose in readiness for the era of recalibrated performance metrics. As Simon Whitehouse, former CEO of JW Anderson and now 360° sustainability strategists Eco-Age says: “As a society we have to begin to process things differently. What we do now [as brands and brand leaders] will give the measure of our moral and philosophical compass. We will be competing entirely on purpose moving forward.”

This equity-centric brand battleground – especially remedial to all those blindsided by the pandemic – extends to catalyzing grass roots power, local initiatives, and community-specific support.

Hyper cognizant of schmaltzy neologisms like ‘meta trueborns’, youth-hungry brands started gorging on it last year, mostly via platforms with vast fanbases like Roblox (43.2m active daily users). Gucci’s garden famously set the scene for it to flog a digital replica of a physical bag for 162% more than its real-world price while Vans World, inspired by IRL skateparks in London and California, presides over daily drops of digital goods and incentivised in-game challenges.

How to capitalise for 2022? Firstly, bearing in mind crypto kids will feel as defined by their digital identities as their IRL reputations, support prosumers (consumer creators), and beyond digital fashion. Nike’s Roblox collab, imaginatively named Nikeland, lets players build mini games in their virtual backyards that mates can join when the play kicks off while RTFTK – the high cred, gaming-originated digital sneaker specialists acquired by Nike in December – has just launched Clone Homes. Hoovering up the ‘homeware hype beast’ market they’re billed as interactive metaverse abodes “you can display your NFT and art in and invite others to visit.”

4: Nurture an NFT Economy with Integrity

NFTs (aka Non-Fungible Tokens) are possibly the most hyped tech horizon leading the charge into 2022, a cause for both celebration and contention.

They’re vital to ascribing value in digital worlds – providing the blockchain-stored rights to products but also experiences, enabling selling, reselling and the even receipt of royalties on original creations from merch to memes. Glorious digital art is finding parity with the analogue marketplace. But they’ve also catalyzed a culture of no holds barred commodification, issuing an invitation (inadvertent or otherwise) to hyper consumption akin to 80’s yuppie culture so painfully at odds with a climate crisis mentality that many NFT marketplaces are switching the genre’s semantics, namely drops (drop culture being a mechanism for driving up demand) for the less frenzied-sounding drips.

So, how to handle? Firstly, with ‘clean crypto’ blockchain platforms such as Tezos, home to numerous NFT marketplaces, where minting an NFT doesn’t require the kind of energy it takes to power a small country (regrettably not a joke). Secondly, NFTs with portability, i.e., that can be carried into other virtual worlds. Leading fashion NFT marketplace The Demateralised’s support on the EBIT Yellow Trip Road activation (see section 5) was the first time its digital garments could be transferred, albeit with some tech knowledge, into immersive virtual playgrounds.

For collaboration, streetwear brand and Fresh Couture’s chief operating officer Dale Parr reveals it’s currently exploring tiered NFT concepts including collaborative experiences where a limited-edition NFT buys access to a musical or artistic performance. The latter would enable the owner to view the performer performing on their phone, as if teleported into their own space, but also broadcast it to a small group hyper-locally, delivering both serious bragging rights and an incentive to connect IRL with mates.

And don’t rule out physical spaces agency in encouraging adoption. Tezos hit Miami Art Week 2021 with an exhibition, Humans + Machines, inviting visitors to make a NFT artwork of their own by interacting with a code (designed by German generative artist Mario Klingemann) embedded into giant wall screens, then mint it on site.

Propelled by the pandemic-spurred fetishization of anything promoting good and preferably pre-emptive health, the appetite for wellbeing will continue to soar in 2022, but a focus on ‘mental wealth’ should be a major imperative.

In late 2021 Whitehouse created a superbly sound tracked, NFT-shoppable slice of virtual storytelling to spotlight mental health via his artistic collective EBIT™. Dubbed Yellow Trip Road the experience riffed on rave culture and its attendant cosmos of narcotics,  in homage to both the collective compassion of the scene but also depression’s omnipotent black holes. Rife with intentionally dark symbolism, it illustrates growing pushback against ‘toxic positivity’ – the relentless encouragement of upbeat, avoidance-focused thinking that can serve to make those struggling feel even worse.

A topic that straddles all generations, also note that Rite Aid is now offering teletherapy in stores across America, and the Barbie Wellness partnership with the Headspace app including meditations ‘voiced’ by the plastic princess herself. Japanese running brand Asics recently deployed its Mind Uplifter app (facial scanning + self-reporting) to show an entire British town how to improve its mental and physical health in concert.

Blended reality tech will continue to supercharge retail in 2022 propelled by major advances in AR such as Lidar (light detection and ranging) technology and cutting-edge depth sensors, now in iPhones. It’s no surprise that industry 3D mapping gurus 6D.ai were acquired by Pokémon Go developers Niantic Labs last year; devices cognizant of the nuances of their surroundings will bring an unprecedented level of phygital interactivity, hyperrealism, and customisation to the table.

As Moin Roberts-Islam, technology development manager at London’s Fashion Innovation Agency says: “Most people are familiar with AR via filters, lenses or WebAR, creating a generation primed to be reached via interactive media where developments in occlusion, collisions, dynamic shadows and contextual reflections lighting signal realism and quality. As the world around us becomes ‘clickable’ – every surface/object in our immediate vicinity an opportunity for interaction or content – the idea of a functional ‘metaverse’ looms closer to reality.”

Early pioneers include Ikea’s AR app, Studio Play (currently in beta) that not only lets people view multiple combinations of objects in their own spaces but also place a lamp on a surface, switch it on and view shadows cast on the wall as they would in real life.

Such tech is already exploding the trad ecommerce grid, and e-ads. Sephora’s AR-infused online ads allow fans to virtually trial beauty products (then buy them) via a click of the page while Carolina Herrera has introduced WebAR shopping to its ecommerce site. A ‘3D experiences available’ button below products lets mobile shoppers virtually place a model clothed in that item into their own surroundings.

7: Advocate for the Aftercare Economy

2022 will be the year when less really is more with the non-new (rentals, resales) but particularly the aftercare economy (alterations, repair, cleaning) becoming more sophisticated bedrocks of brand change in the push to scale sustainability.

Circularity is an area ripe for new and upgraded business models, particularly for luxury brands whose clientele are driving a disproportionate amount of damage (the 1% will account for 16% of carbon emissions by 2030) and as such are increasingly keyed into eco-thinking as part of an aspirational shift towards better living. See LA-based eco-concierge service Green Luxxe whose website messaging conflates sustainability with a pseudo-spiritual sense of achievement (“Let us be a part of your continuous transformation.”).

Cutting edge tech will be key to success, with one of the best examples of 2021 coming from e-tail giant Zalando (45m consumers, 4.5k brands) which, following its seminal attitude-behavior gap report revealing young people shop far less sustainably that they intend, launched a Care & Repair initiative with digital closet app Save Your Wardrobe, integrating aftercare services directly into its ecommerce site. It uses local suppliers, mainly long-serving family-owned businesses, to carry out the services.

To say it’s been a tricky couple of years would be the understatement of the century, making carpe diem-based pleasure-seeking and experiences that provide or communicate a superior depth of feeling a core principle for the next twelve months in brand land.

There are several ways to approach this. Firstly, the healing properties of nature – evidenced in the boom in biophilic brand design. See the beguiling greenhouses of Roman menswear boutique Leam, the living walls of Kith’s Parisian townhouse, Seoul department store The Hyundai’s Sound Forest (50% of its footprint), and the lush outdoor terrace of Hermès’s new London flagship.

Selfridges has been especially canny here by using its Hot Air podcast to emphasize everyday joy via a sensory lens. The first episode of its ‘biophilic pleasures’ broadcast had guests ruminating on simple but glorious experiences like the sound of rainfall alongside seductive, ASMR-style soundbites. See also beauty brand Aesop’s self-care playlist series (“a collection of songs to help shed proverbial skin and promote the new phase of [post-pandemic] life.

In physical spaces, expect an almost hedonistic supersizing of brands’ experiential jurisdiction as seen in Burberry’s surreal, immersive films featuring pop-up The Imagined Landscapes on Jeju Island, South Korea – a harbinger of more artistically engaging, sensorially experiential retail. As Dr. Federica Carlotto, a social anthropologist and course leader at Sotheby’s Institute of Art says, “Silence was the soundtrack to the pandemic, so we now want the ‘hype of presence.”

More literally, take sex – a topic seemingly everywhere, except in the relatively coy plains of retail world. Covid drew back the curtain on sexual pleasure, including the swelling popularity of digital intimacy, audio erotica (see Deezer) and editorialized guidance (see Maude) creating big opportunities for those willing to dive in.