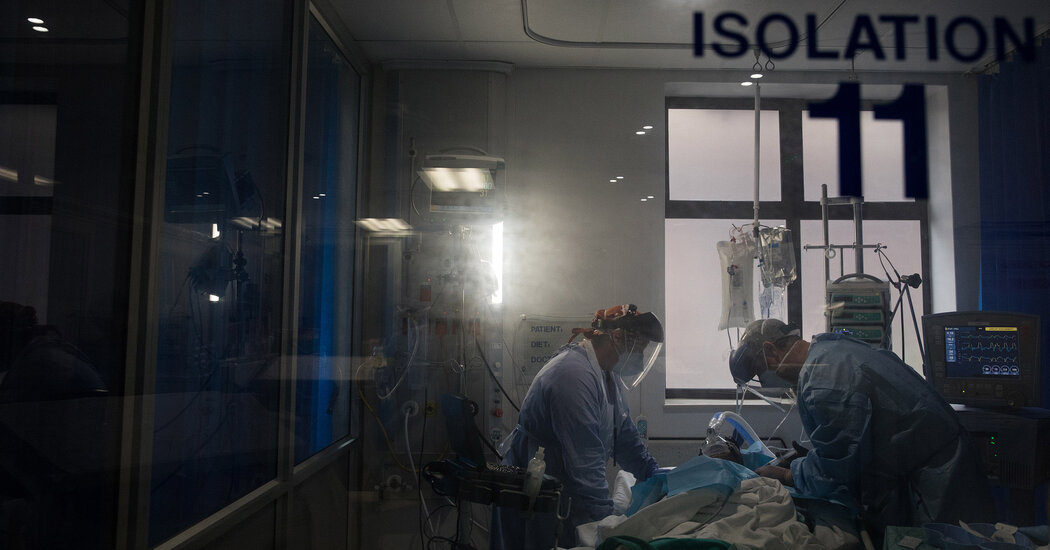 DURBAN, South Africa — Pfizer announced a deal on Tuesday to allow its promising Covid-19 treatment to be made and sold inexpensively in 95 poorer nations that are home to more than half of the world’s population.

The agreement follows a similar arrangement negotiated by Merck last month, and together the deals have the potential to vastly expand global production of two simple antiviral pills that could alter the course of the pandemic by preventing severe illness from the coronavirus.

“The fact that we now have two manufacturer-anywhere licenses for these two drugs is a big change, and it draws a big contrast with the restrictive licensing so far for vaccines,” said James Love, who leads Knowledge Ecology International, a nonprofit that researches access to medical products.

Under the agreement, Pfizer will grant a royalty-free license for the pill to the Medicines Patent Pool, a nonprofit backed by the United Nations, in a deal that will allow manufacturers to take out a sublicense. They will receive Pfizer’s formula for the drug, and be able to sell it for use in 95 developing countries, mostly in Africa and Asia, once regulators authorize the drug in those places. The organization reached a similar deal with Merck for its Covid antiviral pill, molnupiravir, to be made and sold inexpensively in 105 poorer countries.

Nevertheless, there are serious concerns about whether this step will do enough to ensure sufficient supply of the drug for countries that continue to lack Covid vaccines.

Like the Merck deal, the Pfizer agreement excludes a number of poorer countries that have been hit hard by the virus. Brazil, which has one of the world’s worst pandemic death tolls, as well as Cuba, Iraq, Libya and Jamaica, will have to buy pills directly from Pfizer, most likely at higher prices compared with what the generics manufacturers will charge, and those countries risk getting shut out of supplies. China and Russia — middle-income countries that are home to a combined 1.5 billion people — are excluded from both deals, as is Brazil.

Still, Pfizer’s approach on its drug is markedly different from the way it has handled its Covid vaccine. The company has shipped more than two billion vaccine doses globally but sent only about 167 million of those to the developing countries that are home to about four billion people. It has not provided any manufacturers a license to make its Covid vaccine, for which it is on track to bring in $36 billion in revenue this year.

In a key clinical trial, the Pfizer pill, which will be sold in wealthy countries under the brand name Paxlovid, was found to be strongly effective in preventing severe disease when given to high-risk unvaccinated study volunteers soon after they started showing Covid symptoms.

The pill is urgently needed in places where few people have yet had the opportunity to be vaccinated. And because it is a pill that can be taken at home, it will be much easier to distribute than treatments that are typically given intravenously.

“This is going to be really important for low- and-middle income countries, because it’s easy to take, just a short course of five days, and potentially relatively cheap to produce,” said Charles Gore, executive director of the Medicines Patent Pool.

But Felipe Carvalho, the coordinator of Doctors Without Borders’ access-to-medicines campaign in Brazil, lamented his country’s exclusion from the deal. “It is outrageous that a high-burden country like Brazil is once again left behind on access to treatment,” he said. While his is an upper-middle-income country, he said, three-quarters of Brazilians rely on the public health system and few can afford expensive treatments.

For all their promise, the impact of the pills from Pfizer and Merck will depend on patients having access to affordable and easy-to-use Covid testing. The treatments must be given within a few days after symptoms start to be most effective, which experts predict will be challenging in wealthy countries and even more difficult in countries where people have less reliable access to health care providers.

Pfizer’s own production of its treatment will be limited at first. The company says it can produce enough of the pills by the end of this year for 180,000 people — equivalent to about a one-week supply for everyone infected in Florida at the height of that state’s Delta wave. The company expects to ramp up manufacturing, producing at least 50 million treatment courses in 2022, including 21 million or more in the first half of the year. Pfizer has said it will charge poorer countries less for the drug than wealthier ones.

Pfizer’s treatment may have several advantages over Merck’s drug: It appears to be more effective, according to trial data, and the way it stops the coronavirus from replicating seems to be safer, especially for use in pregnant women and women who may become pregnant. These factors are likely to increase demand for Pfizer’s pill around the world.

Australia and Britain have already locked up some of Pfizer’s supply of its pill. In the United States, where Pfizer is expected to soon apply for emergency authorization, no supply deal has yet been announced.

Unlike Merck, which also licensed its treatment to Indian generic drug manufacturers while it was still testing its drug, Pfizer has yet to make a deal directly with any generics drugmakers, a step that might have helped ensure larger supply.

Mr. Gore said that more than 20 companies had contacted the patents pool to express interest in a license to make Pfizer’s drug and that production could start in the first quarter of next year. But access will also depend on how quickly regulatory bodies and the World Health Organization move to authorize the medication, he said.

Stephen Saad, the chief executive of Aspen Pharmacare, a South African drugmaker, said his firm would probably apply for a sublicense to make a generic version of the drug and aim to sell it for about $10 a course across Africa. However, he said he could not predict how soon the company would be able to produce the drug because as yet Aspen knows nothing about what will be involved in making it or what supply of raw ingredients is available.

Pfizer’s treatment is meant to be taken at home as a five-day regimen of 30 pills. Ten of the pills are a low dose of an H.I.V. drug known as ritonavir, meant to slow the breakdown of Pfizer’s pill so that it remains active in the body longer.

Generics manufacturers around the world produce ritonavir, but success of the Covid treatment will depend on that drug’s availability. A spokesman for Pfizer, Kit Longley, said the company did not foresee any supply concerns with ritonavir.

When both the Merck and Pfizer drugs are available as generics, it will be possible for doctors to use the two together as a treatment that could keep even more people out of struggling hospitals. Mr. Gore cited experiences with other viruses, including H.I.V. and hepatitis C, for which antivirals have proven more effective taken in combination.

Advocates for health equity said that the Pfizer deal did far too little to address the crisis that has been created by the huge disparity in vaccine access. “Is this the best we can do in a pandemic?” said Fatima Hassan, the director of a South African organization called the Health Justice Initiative. “Who makes these decisions? What’s the rationale for Brazil being excluded? There’s nothing we can do with the M.P.P. or Pfizer to get them included: It’s take it or leave it. So you take whatever scraps come your way, because how can you say no?”