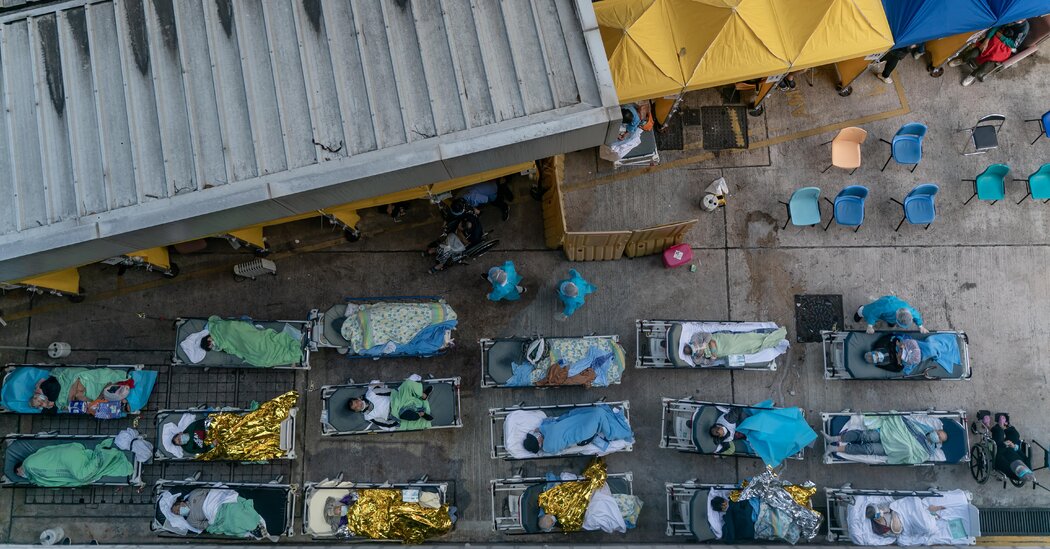 HONG KONG — The scenes were straight out of China’s coronavirus playbook. Armies of workers, deployed to lock down residents. Plans to erect a massive makeshift hospital. And on Wednesday, a command from Xi Jinping, the country’s top leader, plastered across local front pages: “Make controlling the epidemic as soon as possible an overwhelming priority.”

The site of the latest outbreak, though, was not mainland China, but neighboring Hong Kong. And unlike on the mainland, where the government’s lofty language has been followed by quick results, no such relief is in sight.

As Hong Kong sinks under its worst wave yet of the coronavirus, overwhelmed hospitals have left patients waiting on sidewalks. People have stood in testing lines that wind across parks and soccer fields. Cases are still growing exponentially, as officials opt for targeted lockdowns rather than a citywide one. Researchers have warned that by summer the latest wave could kill nearly 1,000 people — more than four times the number that have died of Covid in Hong Kong over the past two years.

The city’s flailing response has exposed a crucial weakness in its ability to handle the coronavirus. Unlike other places facing a surge of the Omicron variant, Hong Kong, a semiautonomous Chinese city, cannot choose to live with the virus; Beijing continues to demand local elimination. But the city, which retains certain freedoms unheard-of in the mainland, also cannot wield Beijing’s full authoritarian tool kit or nearly unlimited manpower to stamp out transmission at any cost.

Hong Kong’s leader, Carrie Lam, has struggled even to define the term that the government uses to describe its approach, “dynamic zero.”

“‘Dynamic zero’ — I admit this is a policy requirement of the mainland,” she told reporters last month. “But I am not the initiator, so if you want an authoritative definition of ‘dynamic,’ I’m sorry, I really can’t explain it.”

At its core, the city’s crisis reflects the limitations of its unique political model. Health experts have pointed out that certain measures, such as citywide mandatory testing, would be impractical in Hong Kong, and could also stir anger in a public already deeply distrustful of the government. But as Beijing exerts ever-tighter control over Hong Kong, through a national security law and sweeping crackdown on dissent, those considerations may start to carry less weight.

Some have called Hong Kong’s willingness to embrace tougher restrictions a proxy for its loyalty to Beijing.

“The loopholes and oscillation in Hong Kong’s antivirus strategy show that some officials have not met the requirements for ‘firm patriotism,’ said Tian Feilong, a law professor at Beijing’s Beihang University who studies Hong Kong.

Last month, the Hong Kong government was forced to clarify that it was legal to make “general remarks and discussion” about the effectiveness of dynamic zero, after Junius Ho, a pro-Beijing lawmaker, suggested that questioning it could violate the security law.

Meanwhile, the public health toll continues to grow. Some 12,000 people who have tested positive are still waiting to be admitted to a hospital or isolation unit, according to government figures. After five months with no Covid deaths, Hong Kong has recorded at least 21 over the past week, including a 3-year-old girl and a 100-year-old woman on Tuesday.

Until this wave, Hong Kong kept the coronavirus largely in check. The city’s combination of tight social distancing rules and aggressive contact tracing meant that the previous four waves of infection were curbed relatively quickly. For much of 2021, the city recorded no local cases. But the highly transmissible Omicron variant assaulted the cracks in the city’s defenses.

The first local Omicron transmissions were traced to two flight attendants who returned from abroad in December. A bigger Omicron cluster was connected to a woman who was infected while in hotel quarantine after returning from Pakistan.

The woman passed the virus to her husband, who spread it to a cleaner at a vast housing development. Hong Kong locked down a half-dozen buildings and tested 37,000 people last month after more than 100 people there tested positive.

The virus has now spread to more than 20 senior homes and care facilities, highlighting another weakness in Hong Kong’s preparations. While more than 84 percent of people over age 11 have had at least one shot of a vaccine, among those 70 and older, the proportion is just 56 percent.

“In a way we were a victim of our own success because the fatality rate and the infection rate were pretty good until recently,” said Regina Ip, a pro-Beijing lawmaker who was speaking by phone from self-quarantine after her driver tested positive. “Older people thought they didn’t need to be vaccinated because there could be complications. And the government was hesitant. We have avoided vaccine mandates.”

As the outbreak grew, Mrs. Lam at first tried to draw a clear line between Hong Kong and the mainland, even as she pledged to adhere to dynamic zero. It would be impractical to invite mainland workers to carry out door-to-door testing, she said this month, in part because of language differences; the primary language in Hong Kong is Cantonese, not the Mandarin used in the mainland. Mrs. Lam also rejected calls from pro-Beijing lawmakers to introduce mandatory universal testing, defending the more targeted operations.

“If we give up this effective, focused testing work and rashly follow other places to conduct so-called community testing, I will not bear the consequences,” she said. “Anti-epidemic work is not a slogan.”

“The Hong Kong government just follows instructions from Beijing, but they are still hesitant to go full throttle, to go all the way,” said Willy Lam, an adjunct professor of politics at the Chinese University of Hong Kong. “They know that most people in Hong Kong don’t trust the Chinese way of doing things.”

But in recent weeks, as the outbreak has spiraled out of control, calls for Hong Kong to draw closer to the mainland strategy have grown. China’s state news agency and official Communist Party mouthpiece both published commentaries this month warning against any suggestion of living with the virus.

He wrote in an opinion column, “Hong Kong’s methods are nondescript, half-baked and full of loopholes, which led to this outbreak.”

Others have been more explicit about the political implications. Professor Tian, in Beijing, blamed Hong Kong’s failures to control the virus on officials overly influenced by the West.

In written responses to questions, Professor Tian said the latest outbreak showed that “the Hong Kong government still has some insufficiently loyal or two-faced officials,” even after the security law.

He added: “There should be further steps to eliminate them from the system.”

The political pressure, coupled with the deteriorating public health situation, seems to have had an effect. Over the weekend, Hong Kong officials traveled to Shenzhen, across the border, to set up joint task forces with officials there. The task forces will work to increase testing capacity and build makeshift isolation facilities, like the ones used in China, the government said.

On Wednesday, Beijing announced that it would also assign central government officials, in addition to the regional ones, to help oversee Hong Kong’s outbreak.

But even pro-Beijing figures acknowledge that Hong Kong cannot copy the mainland model outright. When the authorities this month locked down Baise, a city of about 3.6 million in southwestern China, after a flare-up of several dozen cases, they deployed 38,000 Communist Party members and workers to patrol neighborhoods and coordinate supplies, according to the local government. Such networks are a longstanding part of the mainland’s social controls. Hong Kong has more than twice as many residents and no such network.

“We lack enough organization, mobilization and control capabilities, and we also lack a strong government,” said Lau Siu-Kai, an adviser to Beijing in Hong Kong.

Hong Kongers could also prove fiercely resistant to a citywide lockdown. When Mrs. Lam visited a locked-down housing estate last month, residents showered her with insults from their windows — a display of public dissent rarely seen since the imposition of the security law.

The government has hesitated to introduce more invasive contact tracing apps such as exist in the mainland, in part because of residents’ privacy concerns.

But some worry that the authorities will use the latest outbreak as an opportunity to push through more surveillance measures, Professor Lam said. Trust in the Hong Kong and Beijing governments “is quite low,” he said.

Health experts say the political debate has overshadowed the grim medical reality. Between low vaccination rates among older people and the slowness to impose lockdowns, the situation is unlikely to improve any time soon, no matter what path Hong Kong adopts, said Siddharth Sridhar, a virologist at the University of Hong Kong.

“Hong Kong is moving too late,” he said. “We don’t have any good options.”