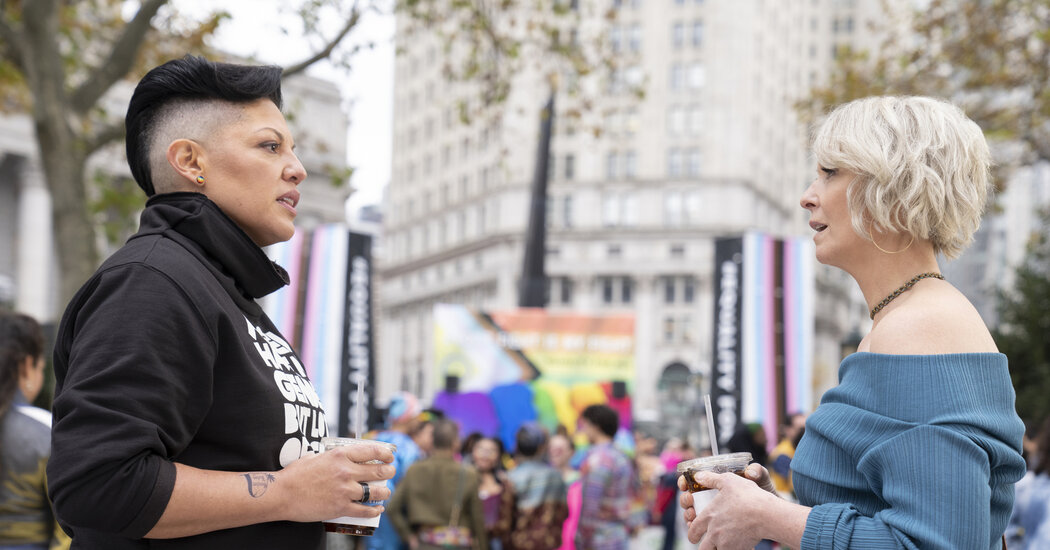 “I can’t give you anything traditional,” Che tells Miranda just before Che gets into an Uber and flies off to Cleveland. The big question I have is whether this is just stating the obvious, or a big tell.

Miranda is smitten with Che, and as we learn in the opening scenes of this week’s episode, the two have been carrying on an affair for the last three weeks. We find Miranda in the crowd at an L.G.B.T.Q. rally where Che is onstage pumping up the crowd, telling them that living their truth is a revolution and that hiding dims their bright light.

Che does all this as Miranda quite literally hides, ducking out of the crowd once she sees her son, Brady, and his girlfriend, Luisa Torres (Cree Cicchino), standing among a group of allies. Admittedly, this is confusing. The simple fact that Miranda is attending some sort of Pride event wouldn’t be all that crazy to Brady, would it? But is the crowd somehow bifurcated? Is Miranda on the gay side while Brady is on the ally side? Because if not, couldn’t Miranda have easily walked up to Brady and said, “Hey, cool that we’re both here”? All of this is unclear.

For whatever reason, that’s not an option, because Miranda is obviously convinced that her mere attendance at this event will out her somehow. Once Brady is gone (I assume? Again, unclear!), Miranda returns with iced coffees and meets up with Che, who calls her out for running away during the set. Miranda explains it was to avoid having Brady find out about the two of them.

The ‘Sex and the City’ Universe

The sprawling franchise revolutionized how women were portrayed on the screen. And the show isn’t over yet.

This is an absolute no for Che, who assumed Miranda was in an open marriage. The relationship is over, Che says, until Miranda figures out her life. And it turns out this is just the kick in the pants Miranda needs to actually do that. This is it. Miranda has to end things with Steve.

But before she does, she has to make sure this thing with Che is real. She stops Che in the street as Che attempts to take an Uber to the airport. “Am I crazy?” Miranda asks. She confesses to her “giant feelings,” wondering: “Am I making all this up?”

She is not, Che says. Che loves her, too.

Miranda is eager to break things off with Steve as soon as possible, though it apparently takes her a day or two to work up the nerve. Eventually, she sits down next to Steve at their oasis, the couch, where he is watching baseball. She makes him put in his second hearing aid. He can tell this is big.

Miranda tells him she isn’t happy and wants a divorce, and she suggests that this — their life on the couch with ice cream and TV — can’t possibly be all he wants.

But as it turns out, it is. And he isn’t sure what else Miranda thinks she is going to find out there. That’s when she tells him about Che.

Harry and Charlotte, meanwhile, face a decidedly different problem. Things with them are still hot and heavy: No hand-washing breaks for them. Which is great for them until their 15-year-old daughter, Lily, catches Charlotte about to perform oral sex on Harry — something Carrie and Miranda (especially Miranda) are gobsmacked to learn, over a seafood lunch at Chelsea Market, that Charlotte still does.

That’s the thing about Charlotte, though: Of the four women of the original “Sex and the City” group, she has always had one of the more voracious sexual appetites — save for probably Samantha. She is set up to look prudish in Season 1 for not wanting to explore backdoor sex, but in Season 3, after a few too many martinis, she blurts out: “Don’t you ever just want to be really pounded hard? Like when the bed is moving all around, and it’s all sweaty, your head is knocking up against the headboard and you feel like it might blow off?”

And let’s not forget that in the first movie, she declared that she and Harry, already married for years, made love two or three times a week. Four if she was feeling a little anxious.

But Charlotte typically presents herself in as prim and demure — a product, we learn in this episode, of growing up with discomfort around sex. She doesn’t want to raise Lily in the same environment, but to her surprise, Charlotte discovers via Lily’s provocative private Instagram account that her daughter is already pretty comfortable with sexuality.

Carrie talks Charlotte off the ledge about this, telling her that Lily seems simply to be trying on adulthood. She’s particularly attuned to Lily’s state of mind because the teen has also been trying on many of Carrie’s vintage looks as she helps archive her old wardrobe for proper storage (including a sweater poncho fans may recognize from the time Carrie was “about a month” late to her “Single and Fabulous” photo shoot). As Carrie sees it, Lily is simply figuring out who she is.

Of course, that’s a lifelong journey; Carrie is figuring herself out again, too, wrestling with her new identity as the old lady upstairs who yells at the youngs for making too much noise at night. Is this really who she is now? It’s hard for her to believe considering she is surrounded her old ultrahip clothes in this episode — and the memories attached to them. They’re relics of her “cooler” days, which her young downstairs neighbor, Lisette Alee (Katerina Tannenbaum), is in the thick of.

If Carrie didn’t find her impulse to yell out the window at Lisette and her friends embarrassing enough, Lisette visits the following day to apologize, catching Carrie mid-mud mask. Carrie over-corrects by insisting that she definitely stays up late all the time and only cares about the noise because she’s a writer. She feels slightly less pathetic until Lisette bops past her on their stoop in a killer outfit while she’s dressed like Edie Beale, smoking a cigarette in rubber kitchen gloves, with multiple scarves wrapped around her head.

The vulnerability roles reverse, however, when Carrie catches Lisette kicking out her cheating boyfriend. Lisette is ashamed, but Carrie has lived all sort of dating drama, and she suddenly remembers that the glitter of youth isn’t necessarily gold. Carrie consoles her, and Lisette is grateful. “You’re cool,” Lisette tells her. But the look on Carrie’s face shows us that she didn’t need that validation from a 20-something as much as she thought.

Finally, on a high from unshackling herself from Steve, Miranda heads to the airport to fly to Cleveland and surprise Che, who had flown there for a gig. And that is the part of all this that is making me nervous. What, exactly, did Che mean by that “traditional” comment? Was it simply that Che is not a traditional person — a fact of which Miranda is already aware? Or is it that maybe Che isn’t into traditional monogamy, and Miranda is about to walk in on something in Cleveland that she’s not expecting? I imagine we’ll find that out next week.

Things I Can’t Stop Thinking About: