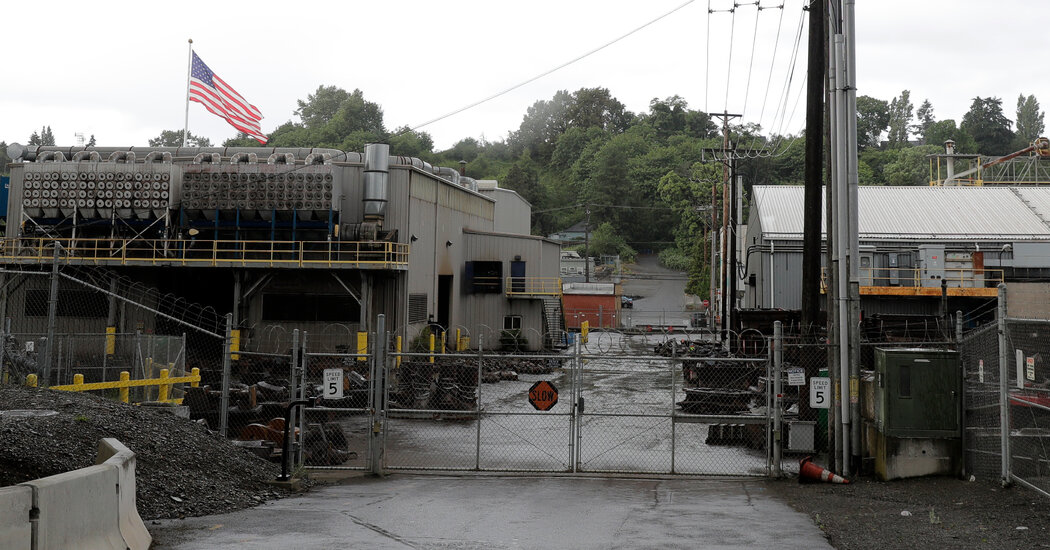 A former metallurgist at a foundry that provides steel used to make U.S. Navy submarines pleaded guilty in federal court in Tacoma, Wash., on Monday to falsifying test results that measured the strength and toughness of the metal — a practice that prosecutors said she continued for more than three decades.

The former metallurgist, Elaine Thomas, 67, of Auburn, Wash., who pleaded guilty to major fraud, falsified test results for more than 240 steel productions, the U.S. Attorney’s Office for the Western District of Washington said in a statement. She could face up to 10 years in prison and a $1 million fine when she is sentenced on Feb. 14.

Between 1977 and 2017, Ms. Thomas worked as a metallurgist at a steel foundry in Tacoma, Wash., owned by Atlas Castings & Technology and acquired by Bradken Inc., in 2008, according to the indictment in the case. Ms. Thomas was named director of metallurgy for the company in 2009.

Bradken produces steel castings as a subcontractor or supplier for companies that contract with the Navy, according to the indictment. The company is the Navy’s leading supplier of “cast high-yield” steel used for naval submarines, prosecutors said, adding that the productions whose tests were falsified make up “a substantial percentage of the castings Bradken produced for the Navy.” It was not clear which submarines might have been affected.

Around 1985 and through 2017, Ms. Thomas “knowingly devised and executed a scheme with the intent to defraud the United States Navy, and to obtain money and property by means of materially false and fraudulent pretenses and representations,” the indictment said.

In an example of the “scheme to defraud,” the indictment said, Ms. Thomas would sometimes alter the first digit of the test results to increase weights by 10 or 20 foot-pounds on tests that determine the toughness of the steel and the “amount of dynamic force” it can withstand.

Ms. Thomas’s falsified test results “caused the United States Navy to make contract payments that the Navy would not have made if it had known the true characteristics of the steel,” the indictment charged.

In a statement filed in federal court on Monday by John Carpenter, a lawyer for Ms. Thomas, the former metallurgist said she “took shortcuts and made material misrepresentations.”

“Ms. Thomas never intended to compromise the integrity of any material and is gratified that the government’s testing does not suggest that the structural integrity of any submarine was in fact compromised,” the statement said. “This offense is unique in that it was neither motivated by greed nor any desire for personal enrichment. She regrets that she failed to follow her moral compass — admitting to false statements is hardly how she envisioned living out her retirement years.”

Bradken’s leadership did not know about the falsified test results until May 2017, when a lab employee found out that the results had been “altered and that other discrepancies existed in Bradken’s record,” the U.S. attorney’s office said.

Following the discovery of the falsified tests, Ms. Thomas agreed to voluntary interviews with federal agents in which she “made false statements” to cover up that she had submitted hundreds of false results, according to the indictment.

In 2019, Ms. Thomas acknowledged that she had changed some results, “but stated that she must have had a good reason to change the results,” the indictment said.

The company took responsibility for falsified tests in June 2020, and also paid more than $10.8 million in a civil settlement over the allegations that Bradken made and sold “substandard steel components for installation on U.S. Navy submarines,” according to the U.S. attorney’s office.

“The Navy has taken extensive steps to ensure the safe operation of the affected submarines,” the U.S. attorney’s office said in the statement. “Those measures will result in increased costs and maintenance as the substandard parts are monitored.”

Bradken and the Navy’s press office did not immediately respond to a request for comment on Monday night.