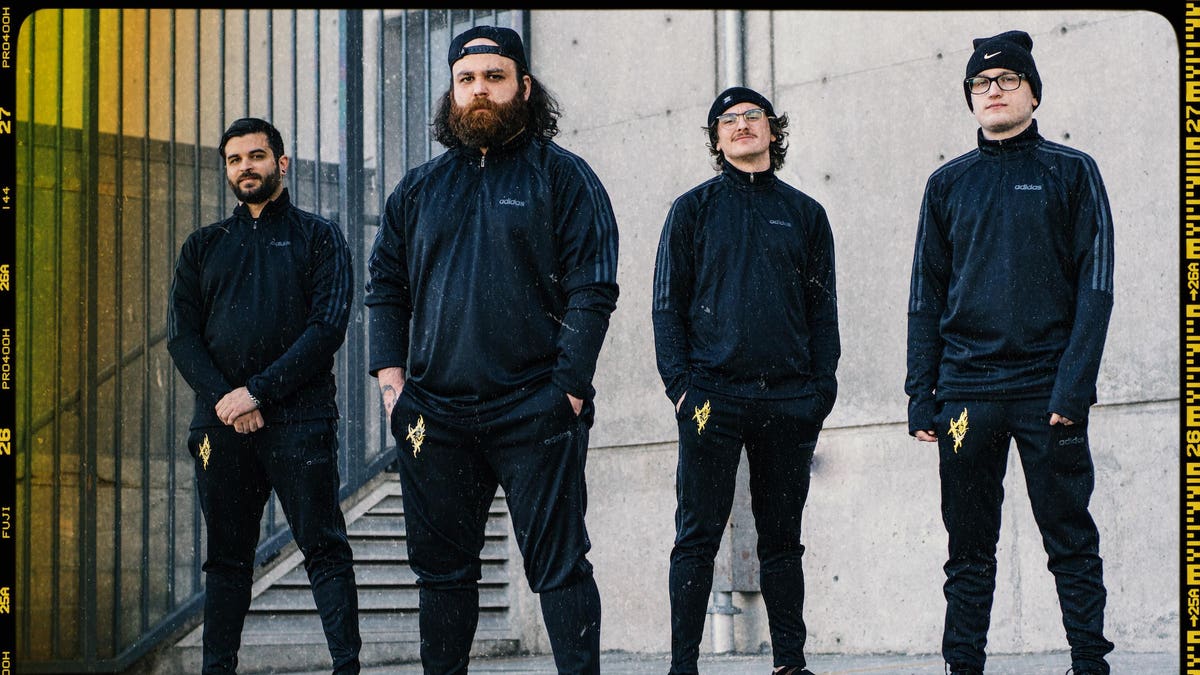 It’s no question that over recent years the extreme metal sub-genre, deathcore, has seemingly risen back to the forefront of the metal scene. Call it a renaissance if you will, the movement is being spearheaded by both ambitious young talent and revitalized legacy bands of the sub-genre. Of the prominent and refreshing young bands, the Canadian outfit Carcosa has shaken things up not only with their elaborate and hypnotic breakdowns, but with their viral comedic metal videos on TikTok.

The band’s founding member, Andrew Baena, who’s also a prominent metal Youtuber, produces TikTok videos with fellow Carcosa vocalist, Johnny Ciardullo, where they both give their finest death growls and screeches over pick up lines, tongue twisters, and more recently brand promotion for Liquid Death. It’s all class act metal-comedy, of which has garnered the duo tens of millions of views/likes on their respective TikTok channels. However, more interestingly, this viral spree has been a subtle yet effective method for Baena and Ciardullo to use the platform to promote their own band, Carcosa.

Since their first viral hits on the platform, Carcosa’s merch sales, music streams, and follower counts have all steadily risen, with some figures even proving to have doubled since their TikTok exposure. With that being the case, Carcosa has attributed part of their rapid success in the scene due to the indirect correlation with Baena and Ciardullo’s viral TikTok gags. And while the success and sales achieved by the band aren’t all directly linked to their TikToks, Carcosa has become a profound example of a niche sub-genre that’s broken through the platform in many unprecedented ways.

Speaking more on their use of TikTok and its correlation with the band’s early success, Carcosa members Andrew Baena and Cooper Lagace have shared their experience and insight into the matter.

When did you decide to jump on board with Tiktok and start creating these metal comedy videos?

Andrew Baena: It’s kind of funny because it was actually a series of videos I was already making for YouTube with Johnny [Ciardullo, vocalist of Carcosa], so we had already been doing them for a while there. They were doing well on YouTube and I had heard of Tiktok and saw that there was a couple of people I followed who had moved over there. Basically I figured I already have these videos made, this is probably a really good format for Tiktok because I can just cut them up into shorter clips, and I’ve already made the video so it takes an additional 30 seconds of work to just clip and repost them somewhere else. So that’s pretty much where it started, as uninspired as it sounds perhaps. It really was just a way to see if there was another audience out there who would like that type of thing.

If you watch the original ones it’s actually really funny because they’re not even formatted for Tiktok at all. They’re just YouTube videos that were cut in half, but for whatever reason one of them went viral on there, and then Johnny and I were like “oh okay this is clearly working, maybe we should do more of these.” Then sure enough, the next batch that we posted did the same thing where it got a bunch of views, and then we started filming them properly, vertically formatted which is the way Tiktok is, and then we started making videos specifically for Tiktok.

How exactly has your traction on Tiktok correlated with the sales and streams of Carcosa? When one of your videos goes viral, is there a noticeable or significant spike in sales, streams, etc?

AB: Things were already going good with Carcosa regardless, but we definitely saw a huge spike in both streams, followers, and all that good stuff on Spotify especially, and that’s also just the easiest one to track analytics on. I think the first video that did crazy on Tiktok was around April [2021], and it got 13 million views which is insane. Before that point we were averaging about 1,000 monthly listeners on Spotify, and then after that video went viral it jumped all the way to about 2,000 monthly followers. So it basically doubled, and then same for streams it was even more crazy. I think we were getting around 1,600 streams on average before, and then that jumped all the way to 5,500 after, which is a big difference. And then of course it had the big spike and then it went back down to, I call them plateaus, but that next plateau was still a way higher daily and monthly average than before the first viral Tiktok.

Then we had another one go viral on May 25th, it had about 12 million views and at that point it had kind of plateaued back down. It looks like that was about 1,500 listeners, so still more than before the first one and then that jumped again to about 2,000, and then same for the streams, we were sitting at about 3,000 and then that jumped to 4,500. It had a big spike and then of course dipped back down, but when it dipped back down it was a higher daily/monthly average than ever before, so it just helped keep the momentum going basically.

How do you walk the line of not just being considered the ‘TikTok deathcore band,’ but rather the deathcore band who successfully uses the platform? Is there a specific approach you try with separating the two?

AB: Well a big thing that we try do is the TikTok videos are never directly associated with Carcosa, they’re not posted on our band’s page for example, they’re posted on my and Johnny’s pages, and then my [instagram handle] is @Baenacarcosa, so then from there I kind of push people with “hey if you liked this video, go check out our band.” So it’s always like “go check out our band” and not “this is us, and we also do music.” We try our best to make them separate, obviously in situations like this of course we get a lot of attention because of the Tiktok videos, so they are a little inseparable to some degree, but anyway that we can make it clear that there’s a differentiating factor we try to do that.

For example, Cooper, he’s not in the Tiktok videos at all but he’s in the band and he does all of the merchandise work and he writes a ton of the music, so the Tiktoks are just me and Johnny’s way of pushing people to our actual band, and then once people are in the band universe we take it from there and try and make them fans of our music.

Cooper Lagace: There’s definitely some acrobatics that we try to do there where it’s trying to keep them separate, but it’s kind of one of those things where it’s like the majority of people aren’t going to understand that it’s separate, so you have to try and push that. We learned from experience with our previous band that it is important to keep them separate, because as far as branding and all of that goes it’s just important.

AB: With our previous band we realized it was kind of an issue where people weren’t necessarily understanding if it was a solo project, a YouTube channel, a cover band, or a real band because the differentiating factor wasn’t clear enough. So we’re trying really hard to make sure if it’s on my Tiktok, it’s Johnny and I’s video, but you should also go check out our band. It’s never in the same sentence if you will.

Given how self-sufficient you all have managed to be with Carcosa, do you ever envision a label coming into the picture?

AB: One of the other benefits of Tiktok, at least right now, is that it’s still much less competitive than pretty much all other social media platforms. Facebook obviously being the most competitive or YouTube, we definitely see way more cross over on Instagram and Tiktok.

As for utilizing those tools to be self-sufficient, we do have a distribution label deal, so they kind of help us push our releases to playlists and stuff like that, which is great for us because honestly we already do everything ourselves. So from our perspective we don’t necessarily want or need a label, because we make all of the music ourselves, we record all of the music, and then we outsource mixing and mastering.

For Cooper’s example, he does all of the merchandise and then for the music videos we work very closely with a director friend of ours. We have a lot of these connections that we can utilize anyways because we’ve been doing music for so long and it doesn’t really make sense for us to sign to a full service label. We’re already doing everything that a label would do, and we’re not giving away as big of a cut of our earnings because we can keep it all in house.

CL: As far as moving towards a label, they definitely do a lot of the stuff that we have been trying to do to fill in the gaps for ourselves. When the pandemic hit, we didn’t plan on doing merchandise at all when we launched the band, but we had so much demand from our fans and we realized that merchandise could actually be a really good lifeline for us to stay afloat during the pandemic, and it would help us keep pushing content out with music videos and stuff like that. It was a huge pivot for us when we started doing merchandise and it’s fully supported our band. A lot of labels will offer a cash advance and that’s a big draw to labels, but unless it’s a game changer deal I think we’re pretty happy with where we are right now and being pretty self sufficient.

AB: It’s definitely a ton of work and a lot of stress, but on the flip side of that is we get basically complete control and also more money.

Once shows are in full swing, do you anticipate you’ll use Tiktok and your youtube channels to the same extent as now, in addition to playing shows/touring?

AB: So this is an interesting question that comes up a lot, it’s kind of a weird situation in our band because our vocalist Johnny is also in another band called Angelmaker, and they’re a full time touring band already. For myself, I’m a full-time content creator and that’s my primary thing. I think we definitely do want to tour and get out there but we’re probably going to do like two-ish tours a year, or maybe we’ll just do festival dates or something like that, rather than going after the whole full-time touring band lifestyle. And we’ve had some cool offers come through already, none of them have been quite right for us which is okay, but it’s nice that offers are coming in and we can see that the potential is certainly there. I’m sure we’ll be doing something hopefully relatively soon, as long as the world doesn’t shutdown again I guess. I’m sure moving forward from here.