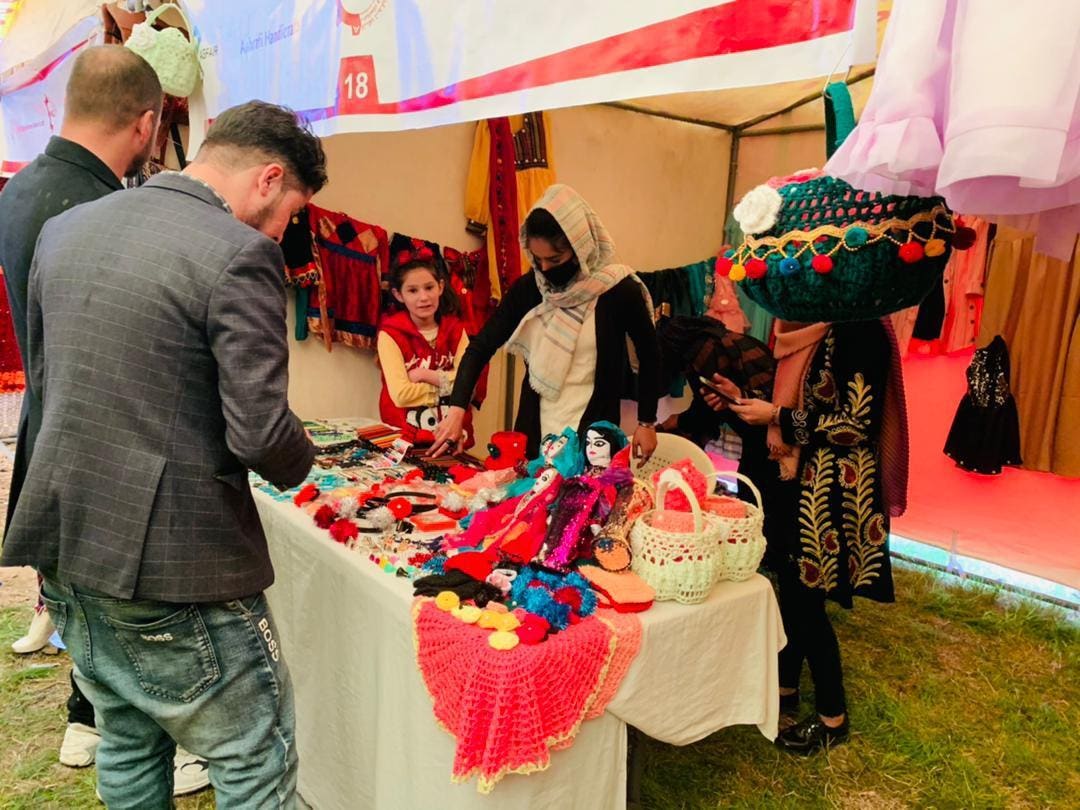 What began as an ordinary day for Rahila Hussainzada quickly turned into chaos when the Taliban took over Kabul, Afghanistan in mid-August, shuttering her business and her livelihood. A middle-aged woman who bootstrapped two businesses—a hair salon and a clothing company— Hussainzada is now at the mercy of the oppressive regime who will decide whether or not she can continue earning a living. The Taliban approached Kabul and within days, dark paint had been smeared over the signs of her stores and on the photos at the window display. She suspects it was the Taliban who did this—as it had also happened to other businesses in town that primarily cater to females.

“I had hope that this business would move forward and I’d be able to make something for my life and for my kids,” she said. Hussainzada’s husband died years ago so bringing money home is a necessity but now, “it’s hard on a woman.”

Hussainzada is one of the thousands of women who launched her own business in Afghanistan during the past twenty years of U.S. military occupation. Western involvement following September 2001 brought with it significantly more rights and equal treatment for women compared to the first wave of Taliban control. Nearly 57,000 businesses were established and run by women in the past two decades, according to a report by the Afghanistan Women Chamber of Commerce and Industry, a nonprofit organization created by Afghan women and recognized by the government of Afghanistan. Civil rights were just beginning to materialize in the country that endured ten years of communism from the Soviet invasion followed by seven years of extremism during the Taliban. With the U.S. on its side financially and politically, and millions of dollars in aid flowing from the United Nations, the rebuilding of Afghanistan was in the works. Women from all 34 provinces took the reins, determined to foster a gender-inclusive economic society where women could be recognized as entrepreneurs and leaders in their own right. The final troops departed Afghanistan by the August 31 deadline, officially marking the end of the war, yet the status and sustainability of women’s businesses remain in question.

Manizha Wafeq, president of AWCCI and an active spokesperson for women’s rights in Afghanistan for the past 15 years cites this distinction as a primary purpose for creating the women’s chamber of commerce. “We wanted women in Afghanistan to be recognized as economic actors and not economic beneficiaries,” she said. “One thing that was very, unfortunately stereotyped in Afghanistan is, ‘Oh poor women. Someone has to bring for them.’”

Recently, women entrepreneurship skyrocketed because they were afforded opportunities, tools and skills that were previously off limits, Wafeq said. The AWCCI is one group that was formed to address the gender gap in the workforce, promote women’s empowerment, conduct policy advocacy and finetune their business skills around networking, financial planning and marketing. A majority of the businessowners used personal savings to start their companies, some received grants from development programs and less than 10% of them were able to secure bank loans, according to the AWCCI’s 2021 Women’s National Business Agenda. The sectors range from advanced media services, healthcare and information technology to clothing, handicrafts and food processing. Wafeq and her fellow alumni of the U.S. Peace Through Business Program were inspired to start this and introduce women’s voices in the economic development of the country. As of 2019, graduates of the program created approximately 8,000 jobs, according to Georgetown University’s U.S.-Afghan Women’s Council.

Foreign aid also significantly boosted the women’s side of Afghanistan’s economy. In 2017 the Japan Social Development Fund committed to financing $2.74 million to the Afghan Women’s Economic Empowerment. The World Bank approved a $100 million grant in 2018 for the same cause—but focused on the Rural Development Project to increase “social and economic empowerment” of rural women in Afghanistan.

The efforts and capital have helped women shine—and then they did their part to take entrepreneurship and financial gain to the next level. In the most rural of provinces, women-run businesses are rampant, such as in provincial Badakhshan which has over 500 of these businesses, according to the 2021 report. Regardless of the women’s education level, family background and geographic location, their “resilience, their enthusiasm and their ability” stand out to Wafeq.

Hussainzada, who started her first business eight years ago, now employs five women at her clothing shop in Kabul, each trained in a different area such as sewing or sales. With this indefinite hiatus, she doesn’t know whether she can continue paying rent, handle her own expenses and employ her staff.

Last week the country’s peace council leader Dr. Abdullah Abdullah tweeted that he and former president Hamid Karzai met with women activists to discuss the role of working women and their needs under the new regime. But the Taliban have yet to definitively state their intentions in regard to women’s businesses.

Even if some businesses are permitted to stay open, the exodus of numerous successful women out of fear for their lives, may immobilize the progress they’ve made leaving behind no pillars for the next group of women. “These were the ones who had become role models and had created hope for their communities and paved the way for the next generation,” Wafeq said. Sales could significantly decline as well if the country loses regular buyers. According to the AWCCI report, staff at embassies are interested in Afghan handicrafts, for example—and many embassies including the U.S. Canada, Germany and Norway have already reduced their staff or fully evacuated their Afghanistan offices.

Wafeq hopes the Taliban “prove by action that they’ve changed,” she said. “I hope this is not the end.”