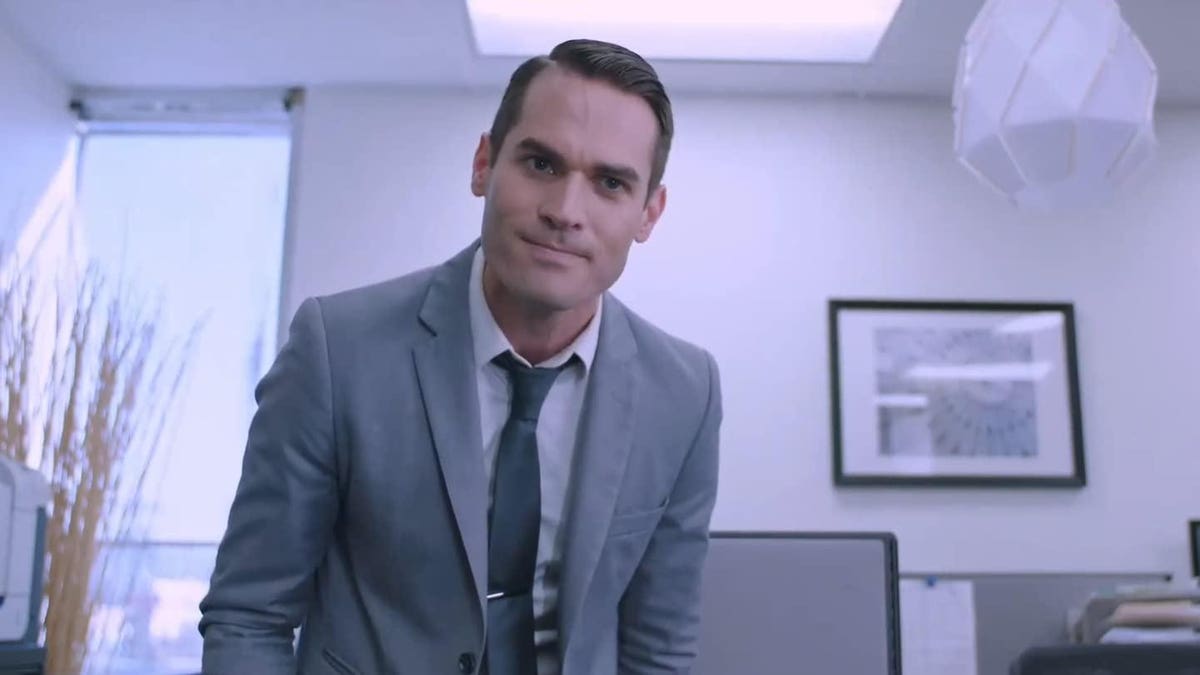 The Beta Test is a stunning dark comedy thriller written and directed by Jim Cummings and P.J. McCabe. The film stars Cummings as a promising talent agent who receives a shocking invitation promising a no-string-attached sexual encounter, but his response to said invitation spirals his life out of control. I sat down to interview Cummings and McCabe for the film, which is available on VOD.

Jeff Ewing: The Beta Test. Both of you wrote, directed, starred in it -it’s clearly a labor of love. So how did the project get started, and what inspired it?

Jim Cummings: We had the idea for the letter service, where I was thinking about… what would you do if you got a letter from an admirer inviting you to this anonymous, no strings attached sexual encounter? That’d be really crazy, like a Twilight Zone episode, and it was an intriguing idea. And I called P.J. and I was like, ‘Would you do what you do?’ And he was like, ‘I wouldn’t do anythingm’ right away.

P.J. McCabe: Throw it out, terrifies me. My wife’s gonna kill me.

JC: Yeah, so I was like… ‘Yeah, okay, you’re probably right,’ and then we just kept talking about it. That was kind of the genesis of the project, but then it also spoke to this idea that P.J. and I had of making these bigger movies like The Wolf of Snow Hollow, these big studio movies we’ve been doing, and I’m on the side making these smaller, independent films. We just heard about WeFunder, this crowd equity platform, and I’ve been doing some research into it. I was like ‘I think this is kind of the future of independent film.’

I’d done the investing and financing of our Thunder Road, my first feature, through Kickstarter, and then through private friends and family who reached out after the Kickstarter was run, saying, ‘Hey, can I buy a share of the company?’ We knew that that was working for independent film, and then there were only about two other films on the WeFunder platform. And then I think this could be something for us, we could try it out. We kind of did it as a whim, not knowing if it was going to work, and then we raised $350 grand in the first 12 days or something like that.

It was like ‘okay, cool, so this is the future, but now we can just like relax.’ Now we can make movies however we want for the next 40 years… and so we bet on ourselves and it paid off. It was kind of in tandem of telling the story that we wanted to speak against the Hollywood financing-studio system structure. We’re also thinking that the internet could be this powerful enterprise to make movies and finance them and distribute them… and so we just kind of did both at the same time and it paid off.

PJM: The process was kind of the ‘beta test’ as well as the movie. We’re very lucky, knock-on-wood.

JE: I love it. Did you have any particular cinematic influences for the film when you were sort of writing and shaping it?

JC: Yeah, PJ and I were always talking about 1970s Italian films like Dario Argento’s work and Blood and Black Lace and Cat o’ Nine Tails, all of our favorite Bruno Nikolai-scored films. David Fincher is a huge influence, how meticulous and well structured his films are. Chinatown was a huge influence on the film, Blue Ruin, Eyes Wide Shut, 50 Shades of Grey, all of these movies that then became the goofy comedy we made of all these serious movies.

PJM: These very heavy, high stakes films, we wanted to blend and then put a comedic spin on it. Which was a lot of fun.

JE: I love those genres, I can definitely see that lineage. Did you know as you were shaping the story’s specifics that it would become this increasingly paranoid story about a man’s inability to deal with his own issues?

JC: Yeah, that’s what we love. All of my movies are about a guy on the edge who builds up to this climax of this nervous breakdown and public freak-out. We knew that we could do that with sex shaming in America, Puritanism, and the audience would be along for the ride. We talked about that. It feels like it’s 50 Shades of Grey if it was made by the South Park team of just like having the engine of the film be this stressed out detective engine and then having it be a bunch of goofy jokes as well for the audience. We knew from from the genesis that it was going to be that.

JE: Speaking of your your career, Jim, how was it not playing a cop?

JC: Well, I do impersonate a cop in the film a whole bunch. Its this inside joke of… I’m not a cop, and everybody on Twitter is like, ‘oh, Jim’s making a new movie but he plays a cop in the movie,’ but then with this one we stretch it out to, like, minute 45 and its me pretending to be a cop. I knew that would make cinephiles laugh, fans of our previous work…. I don’t know, I feel like I still play this aggro-type A-testosterone-driven prick. It felt very natural for me to transition into the corporate world. And it’s a different uniform, but it’s still uniform.

JE: One of my favorite scenes in the film is the freak-out in the garage. I love the performance of it. How was that scene written?

JC: We shot it in 17 days, it was a sprint-to-do thing. P.J. and I wrote that monologue out loud in our buddy Ben’s apartment, which is neighboring to our production offices. I would just start kind of rambling about all these things… we knew that the pinnacle of the film was going to be him admitting to all the lies that you’ve seen him tell for the previous minutes, and that was going to be this [moment of] ultimate catharsis for the audience. So it just became us cataloging all of those things, and then talking about the mindset like… it’s so great to watch this guy finally not be able to lie anymore, having lied the whole movie. And then obviously, you populate some of the bits with me saying [things like] ‘I fucking hate the internet,’ ‘I just wish it was the early 2000s.’

It kills with audiences, it’s like… this pathetic idiot is just outdated. It’s so much fun because… at no point when you’re watching Entourage or any of these big fucking movies that celebrate Hollywood do you ever feel more powerful than the powers-that-be and it’s great as an audience member to shift that power dynamic. And now people get to laugh at these fuckers. It’s great.

PJM: And watch his exorcism, which is kind of… it’s just him exercising all of his lying demons and finally getting to the honesty that’s deep down in there somewhere.

JE: It’s also a nice in a garage as well because the culmination of those scenes of conflict usually end with a body in the trunk.

PJM: Yeah, and that’s what we’re hoping for… is she gonna snap? Like you just we want to assume that, you know, he’s going down.

JC: Yeah, we’ve kind of teased that throughout the movie, these partners are murdering their partner and then she’s there with scissors… and they’re like, ‘Oh, he’s gonna get murdered.’

PJM: Yeah, we were hoping the audience would be like, ‘well, he’s gonna get brutally murdered here, obviously, look at this psychopath.’

JE: I love it. The film also has this criticism of ‘Big Data’ dominance and the threats that imposes, so I have to ask you: if these sorts of invitations went out, what do you think people would do?

JC: You’d be surprised how many people are like Jordan and Caroline. I think it’s funny when we go when we go to Europe and screen the film, people are like, ‘Oh, he only has one mistress… that’s not a big deal.’ I think in America we’re so still puritanical, it is a bit like The Scarlet Letter to admit your humanity, and so I think it would really work. That’s why we wanted to make the movie. There’s there’s a moment in the film, when Johnny PayPal stands up and is confronting me, and in the background of the shot is this cardboard cutout of the original algorithm that he built. It would work. It is actually the algorithm that our buddy (who’s a programmer) built, and it’s in focus for about half a second… we did that as an Easter Egg so if somebody wanted to build this thing, they very well could.

PJM: Yeah, the keys are on the cardboard right behind him. And you could eventually make this service that can harvest data.

JC: I think the opening for us because we aren’t on camera. That was the big one for us because we both got to actually direct and not half focus on directing and also acting, and getting makeup on, and memorizing lines and shit…

PJM: And do our best David Fincher impression which, which is all we want to do.

JC: And it’s so manic when we’re on set, like, ‘oh my god, we’re getting it. It looks great. It’s so good…. there’s so good!’ But then also, just making the movie open in Swedish, its so weird feels like an international cinema experience. It was just exciting, it was so much fun and so vibrant to be on set. We’re like, ‘Oh, this is gonna do well around the world. This is a really weird way to open a movie, and you could feel it… There’s a vibrancy on set that everybody can feel when you’re making something dope.