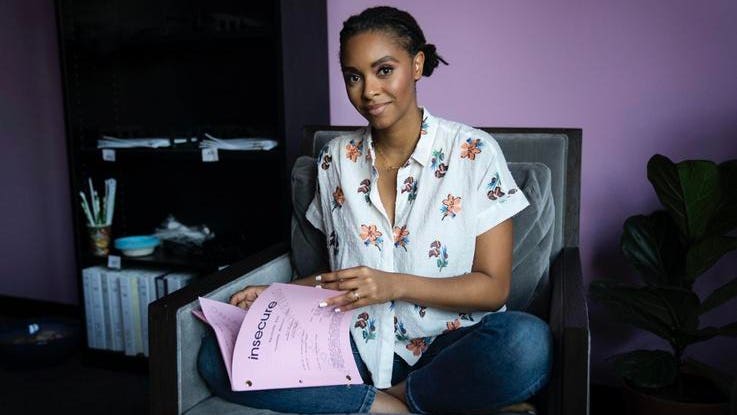 “If you knew the end was coming, how would you make the most of your time left? What legacy would you want to leave behind? How would you want to be remembered?” Insightful questions spoken by Insecure’s Kelli Prenny [Natasha Rothwell] within the first episode of the series’ final season signifies that time is running out for Insecure as a series, including the routine behaviors of the show’s characters.

This season encapsulates maturity, growth and wisdom, and a personal and professional shift in direction. The group of friends has collectively experienced the highs and inevitable lows of growing up and navigating the rocky waters of figuring out life during your mid-twenties.

So, what’s next for these imperfect characters this season? Intentionality. Veteran HBO Insecure writers Amy Aniobi and Syreeta Singleton have made intentionality a central theme this season by challenging each character to confront their insecurities head-on instead of running from their issues or downplaying personal and professional shortcomings.

Forbes spoke to both Aniobi and Singleton about this season’s character development, how being Black women writers influenced their work throughout the show, and what they will miss about writing for Insecure.

Dominique Fluker: You’ve been writing on Insecure for the last five years and before that on Issa Rae’s Misadventures of Awkward Black Girl web series. Take us through how you’ve expanded storytelling throughout the years on the show.

Amy Aniobi: We’ve expanded storytelling by finding ways to integrate the other characters a bit more fully. We realized that if a character story didn’t connect to Issa, it didn’t have the proper emotional resonance because she’s the main character. We wanted to make sure that our stories were through the lens of connecting to our black female lead. I love how we got to explore episodes that had different types of structure.

There’s an episode coming up this season that is entirely about one character’s experience. We allowed ourselves the freedom to tell different structural stories, even if we were always pinning everything back to our lead.

Fluker: Are you able to share some overarching themes of the episode in the season?

Aniobi: We’ve always said [writing room and Issa Rae] that the show ends when the characters are secure in their insecurity and getting to the point that being an adult isn’t having everything figured out. It’s going through the peaks and valleys of not having things figured out. We’re exploring what it means for each of these characters to feel comfortable in their skin. What do they need to get to the place where they feel secure in who they are?

Syreeta Singleton: “Intention” is a word and theme we kept coming back to this season. Each of our characters is at a place where they’re old enough to know better and to take control of their destiny. They must face those insecurities head-on.

Aniobi: It was about making sure that nothing felt was repeated. As humans, we reiterate our mistakes a lot. People don’t change after a certain age, they just become better at progressing through their failures and quirks, but you are who you are. We had to figure out how to make sure that their character flaws were still building on the foundation we had set for each of these characters but that they were changing.

Fluker: Can you speak to Issa’s evolution as well? I was thoroughly surprised by what I saw in some of the screeners.

Aniobi: From the beginning, we built this story about this woman who makes the greatest sin in black couplehood. It’s cheating. The thing is, we always see men cheat and women take them back. What I love about season five Issa is that that part of her is healing. Even in season four, you see it. She’s not dwelling on the fact that she cheated. There’s an episode coming up where the other characters ask Issa what one of her biggest regrets is, and I think people will become surprised by what she says. I love that this character has grown to a place where she’s forgiven herself for cheating. It’s not what you did. It’s why you did it. We’re seeing that character become someone who’s not going to be aggressively passive anymore.

Fluker: Share some of your experiences being an African American woman writer on the show. How has your cultural experience makeup influenced your work?

Anobi: Being a black woman writing in Hollywood, you often write on shows representing people who don’t look like you, but we can do that. Black writers have had to navigate some white spaces to get to Hollywood. What was great about being on Insecure is that I got to write, challenenling. I wasn’t just channeling a black character or being protective of how black characters were being represented on a white show or in any way, just tapping into the comedy muscle that I’ve honed from being in many white spaces in my life. On Insecure, all my blackness is needed and necessary on this show. It felt natural to come up with stories for these characters. To use all your talent to create a character, a world, and a story is not something that every writer gets to do in this industry. And on this show, I felt like I got to do that.

Singleton: This show always felt like home. We shoot where I grew up and where I live. I know the owners of some of the restaurants, the products I use have been featured on the show. The characters remind me of friends I know, so sometimes, writing for this show was as simple as reminiscing.

Fluker: If you could sum up this last season of Insecure with one word, what would it be?

Anobi: It would be warm. I won’t say too much, but in seeing Molly and Issa’s friendship come back, it’s that feeling feel when you’re with your best friends. It’s that feeling you feel when things are moving in the right direction. I always feel warm.

Fluker: What will you miss most about writing on Insecure?

Anobi: I’ll miss the growth and opportunity of having everything before you. I don’t know if you can replicate that first time of feeling that way. I hope I’ll get to a project someday where I’ll get that feeling back. I’ll miss it.

Watch Insecure’s fifth and final season on HBO every Sunday or stream on HBO Max.