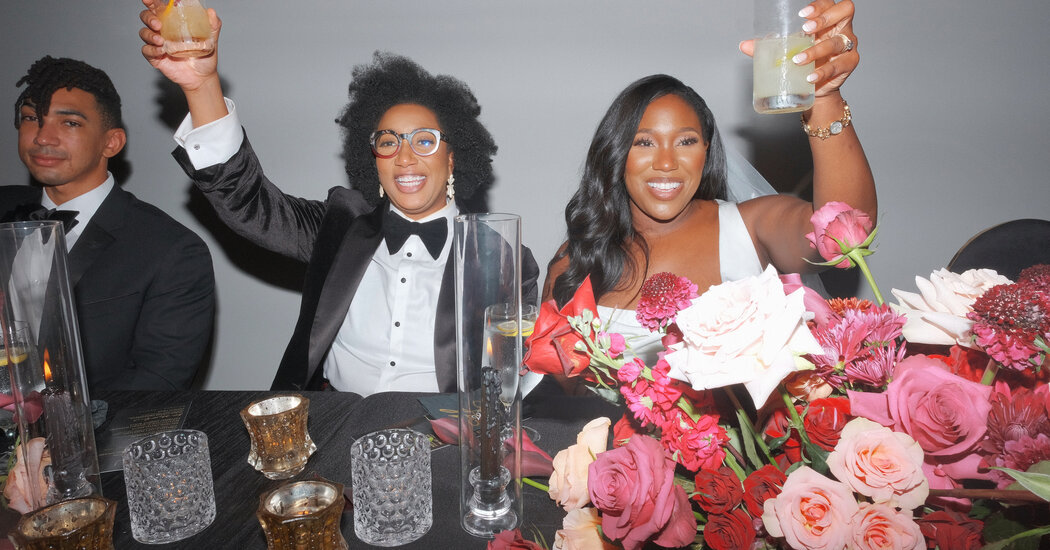 When Denise Parnell and Whitney Hardy first encountered each other in 2009, it was on a blind date — one that Ms. Parnell was on with a man to whom she had been introduced by friends.

To ease the pressure on Ms. Parnell, her friends had arranged for the setup to be part of a larger gathering of 10 people at a Mexican restaurant in Memphis, Tenn. The extended group included Ms. Hardy. But she and Ms. Parnell, both from the Memphis area and then in their early twenties, did not pay much attention to each other.

Ms. Parnell was focused on her blind date (which turned out to be “a complete disaster,” she said). Ms. Hardy was focused on her girlfriend at the time, who was with her that night. Afterward, five years went by without the two giving each other another thought.

During those years, Ms. Parnell remained in Memphis. A graduate of the University of Memphis, she was busy working as a ghostwriter for a corporate blog, in addition to volunteering at a local farmer’s market and participating in the local Junior League chapter.

Ms. Hardy, who graduated from the University of Tennessee, moved to Atlanta for a tax-auditing job, before returning to Memphis in 2014 to start Henderson Transloading Services, an agriculture storage and shipping company, with her family. On the side, she launched the L.G.B.T.Q. social networks LesBiFriends, which still exists as a Facebook community, and Out901.com, which shuttered in 2017.

“I wanted to be more visible to kids like me,” said Ms. Hardy. “I always say to people, ‘Be the mentor you needed when you were younger.’”

Although they were born and raised in the same city, their upbringings were somewhat different.

Ms. Hardy grew up in a two-parent household in Germantown, Tenn., an affluent suburb of Memphis. Ms. Parnell was raised by her mother and maternal grandmother, and lived in different neighborhoods in Memphis throughout her childhood.

Ms. Hardy came out in her freshman year at Houston High School in Germantown — “the first gay student to go public there,” she said, which “terrified” her. Ms. Parnell dated only men.

In late 2014, the two crossed paths again when they ended up on the same group chat with yet another bunch of mutual friends. They didn’t agree on anything. “We would argue over the best coffee shop in Memphis or who was the best up and coming artist. Everyone on the chat would just get quiet,” said Ms. Hardy, 34. “But it drew me closer to Denise. We’re both, um, very opinionated.”

Ms. Parnell, also 34, said she liked that Ms. Hardy “challenged” her. “When I’m passionate about something, I come on strong,” Ms. Parnell said.

Eventually, their playful bickering via text message on the group chat led to in person conversations when the two began carpooling to local events. Ms. Parnell and Ms. Hardy realized they shared a passion for art openings, museums and live music.

“We found out that we literally lived down the street from each other, too,” said Ms. Parnell, whose house near the University of Memphis was just blocks from Ms. Hardy’s house in the Pidgeon Estates neighborhood.

Over the next year, the casual friends became confidantes. Aligned on a passion for fresh vegetables — Ms. Parnell is vegetarian; Ms. Hardy is pescatarian — they shared many dinners cooked at home by Ms. Hardy, during which they would counsel each other.

Ms. Hardy was still with her girlfriend, but had concerns about their relationship. She knew she wanted to get married one day, but she wasn’t convinced that she had met her ideal match.

Ms. Parnell also questioned her life trajectory. She was by then working as a freelance content creator and a social media manager at the Memphis College of Art, and felt uncertain in her career.

“It seemed like I did all the right things and I was expecting to be farther in my professional career, but stuff wasn’t lining up for me,” she said. “I kept hitting walls with my creative endeavors as a writer.”

One night after a supper at Ms. Hardy’s house, Ms. Parnell went home and had a romantic epiphany: She liked Ms. Hardy.

“I texted Whitney, but she tried to talk me out of it,” said Ms. Parnell, who recalled Ms. Hardy telling her, “‘You probably had too much to drink.’”

To that, Ms. Parnell said she texted back: “I had one glass of wine!”

Ms. Hardy did not overthink the fact that Ms. Parnell had never dated a woman. “I’ve actually dated mostly bisexual women,” she said. And for Ms. Parnell, exploring her sexuality felt natural, she said. “It wasn’t a big deal to me because I grew up attending performing arts schools. Pretty much everybody around me was gay.”

But both worried that a romantic relationship would jeopardize their friendship. That concern led them to keep their relationship strictly platonic throughout most of 2015. During that time, Ms. Hardy broke up with her girlfriend, and launched 3rdSpace, an organization in Memphis that supports the local arts community.

Ms. Parnell did some freelance writing about the food scene in Memphis for Blavity, a news and lifestyle website created by and for Black millennials. Her desire to take things in a romantic direction with Ms. Hardy did not wane. In November 2015, Ms. Parnell recalled, “I finally said, ‘Hey, we need to go on a proper date. We need to get dressed up.”

They went out to dinner and then saw the film “The Martian.” On the way home, they stopped at Muddy’s Bake Shop, a bakery in Memphis, for cupcakes. The evening, Ms. Parnell said, was a turning point in their relationship. “It marked the slow progression from getting to know each other to being more interested in each other,” she said.

That December, Ms. Parnell and Ms. Hardy went to a holiday party hosted by New Memphis, a local organization focused on community development. It was then that Ms. Hardy said her romantic feelings for Ms. Parnell crystallized: “I felt this feeling of comfort, safety, adoration and pride as we mingled with my friends. I wanted everyone to meet Denise and they loved her.”

By January 2016, they were officially calling themselves a couple, and that October, the two moved in together, along with Ms. Hardy’s Chihuahua, Duck.

Around that time, Ms. Parnell launched a lifestyle blog called The Elle Aesthetic and left her job at the Memphis College of Art. Ms. Hardy continued to juggle her time between her start-up ventures, which required her to travel and be on call for clients, colleagues and young artists.

“I grew up in a family of entrepreneurs so I knew I had to be with a certain type of personality. Denise carried boxes with me. She respected my journey and was there with me for my growth,” said Ms. Hardy.

Over the next few years, the couple continued to invest time in their careers and relationship; in 2019, they adopted a rescue Labrador together, which they named Panda. Then came the pandemic, which put life as they knew it on hold.

“I can’t downplay how stressful it was. I was concerned about work and our health and just going to the grocery store,” Ms. Parnell said. “But we got to know each other in a new way during that time. I learned from Whitney that you can get through hard times and still have a soft heart.”

But when the world ground to a halt, Ms. Hardy said, it allowed her to see how pivotal Ms. Parnell had become to her life. “I said to myself, ‘If you don’t grab this woman now, you’re crazy,’” she said. The pandemic also did not crush her entrepreneurial spirit: In January 2021, Ms. Hardy, launched an enhanced water company called Hardy Beverages in Memphis.

Ms. Hardy proposed to Ms. Parnell on Jan. 23, 2021, the couple’s fifth anniversary, in front of the Levitt Shell, an amphitheater in Memphis.

She sought out a Black female designer to create a bespoke engagement ring, and landed upon Maggi Simpkins, who customized the ring with a ruby, Ms. Hardy’s birthstone, beneath the diamond setting. (Ms. Parnell had considered herself more of a plain-gold-band person, but said Ms. Hardy wanted to have “a moment.”)

On Dec. 31, 2021, Ms. Hardy and Ms. Parnell were married at the Cordelle, a Victorian home in downtown Nashville. Reverend Shameka Cathey, a minister of the New Covenant Christian Church in Nashville, officiated at the ceremony before 50 vaccinated guests.

To their black-tie wedding, Ms. Parnell wore a simple white crepe gown with a cathedral veil. Ms. Hardy donned a custom black velvet suit from The Tailory New York, personalized with freshwater pearls to honor the couple’s water signs (Ms. Hardy is a Cancer; Ms. Parnell is a Pisces). “I went to New York three times for fittings, so I guess that makes me the bride,” she said.

After the ceremony, the couple stole away from their guests to a private room to share an intimate moment, which both called the highlight of their New Year’s Eve wedding.

“I was like, ‘Oh my gosh! We really did it!’” said Ms. Hardy. “I was an accounting major at University of Tennessee. I’m a nerd. You never think you’re going to get the cheerleader.”

Ms. Parnell, who said she was once known as the “queen of the first date,” reflected on their romantic history: “Whitney was always like, ‘Why do you like me?’ I would always say, ‘One day, you will wake up and relax.’”

Where The Cordelle in Nashville, Tenn.

Supporting Women The couple made it a priority to work with Black female vendors, including photographer Elle Danielle and planner Tanza Perry-Cooper of LeeHenry Events in Nashville, who assisted on the day of the event.

Signature Cocktails Ms. Parnell’s tipple was a spicy mezcal margarita named after the TikTok sound, “Is it Me? Am I the Drama?” Ms. Hardy’s drink was the “Southern Girl,” a mixture of vodka, orange bitters, maple-infused simple syrup, cinnamon and hard cider.

Song Snafu Instead of their chosen first song, “Nobody” by Leisure featuring GoldLink, Ms. Hardy said the D.J. “played the wrong song at first, so we just stood there.” But when the right track came on, “we smiled and got out there,” she said.