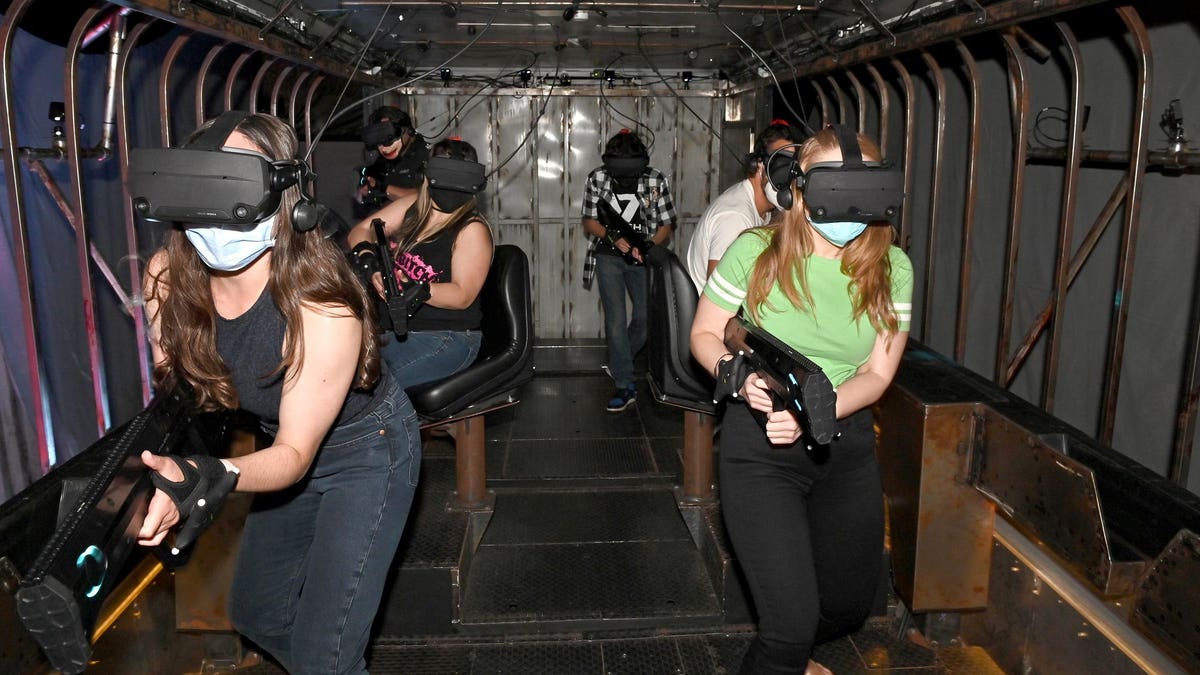 The Best Buy store at Westfield Garden State Plaza in Paramus, N.J. closed in April, 2018, and it isn’t too hard to image the deserted concrete box as ground zero in the fight to save humanity from a zombie apocalypse.

The empty store is being given new life – temporarily at least – as the home of a cutting edge virtual reality experience that uses dead space at malls to stage battles with the undead.

It’s also a sign of what the future most likely holds for malls, as shopping centers need to become more creative about pop-up experiences to take the place of shrinking retail square footage.

The virtual reality experience at Westfield Garden State Plaza, Army of the Dead Viva Las Vengeance, is the result of a partnership with Netflix , VR studio Pure Imagination, and entertainment promotion company Fever, to create an experience inspired by the Netflix film Army of the Dead.

The Westfield mall chain, part of international mall operator Unibail-Rodamco-Westfield, has embraced the zombie experience in a big way, installing it in an empty Debenhams department store in its mall in London, and on the roof of a parking garage at Westfield Century City in Los Angeles.

The Viva Las Vengeance collaborators have announced plans to bring the experience to 17 U.S. cities, but locations for most of those cities have not yet been announced.

Tickets for the experience range from $19 to $37 depending on time of day, and number of tickets purchased. The experience lasts 30 minutes, including training and a briefing about the rescue mission at hand. The actual time spent shooting zombies in virtual reality is only 12 minutes, but during that brief time players have an opportunity to kill hundreds of zombies that charge the rescue vehicle has it makes its simulated way through a bombed out, war-torn Las Vegas.

Players chose a zombie fighting name and their virtual weapon when they arrive, and see how many zombies they killed on a scoreboard as they leave, a feature that according to online reviews drives repeat visits as players try to improve their score.

The Best Buy at Westfield Garden State Plaza provides ample space for the briefing rooms, two trucks that hold six players each, a merchandise store, and a restaurant that serves tacos and drinks.

The Viva Las Vengeance experience is using only the first level of the two-story building.

While the Best Buy has been vacant for almost three and a half years, it didn’t die due to lack of retail demand. Best Buy moved the store into a new location, in a different mall less than a mile away, after Garden State Plaza took back the space in preparation for an extensive renovation proposal that will add a mixed use residential complex, and public open spaces, to the mall.

The temporary VR experience (Viva Las Vengeance typically stays at a location for about eight weeks) also is a way for mall operators to test the public’s appetite for immersive experiences, in the midst of an ongoing pandemic, before leasing space to permanent experiential tenants.

Location analytics firm Placer.ai reported this week that more people are seeking experiences, as demonstrated by the impressive gains in traffic seen at gaming and dining chain Dave & Buster’s since early June. Throughout the summer the chain has seen strong traffic growth each week, compared to equivalent weeks in 2019, with growth of 6% or more each week, according to Placer.ai.

Placer.ai is also seeing a slow and steady return to movie theaters, based on traffic at AMC theaters, even though levels are still close to half of what they were in 2019.

AMC reported Tuesday that it broke U.S. attendance records over Labor Day weekend, with more than two million people in its theaters over a four-day period. Admission revenue broke its 2013 U.S. record for Labor Day weekend.

The producers of the show say they have extensive hygiene and social distancing regulations in place, and use Cleanbox, a UVC surface decontamination device, to clean the headsets and accessories used in the experience.

The zombie-killing experience will be at Westfield Garden State Plaza through October. Pure imagination Studios, a California-based production company, has created a next-level immersive experience. Its success at Westfield Garden State Plaza, a mall the retail industry watches closely as a trend predictor, could determine if mall operators decide to make virtual experiences a permanent part of their shopping centers.