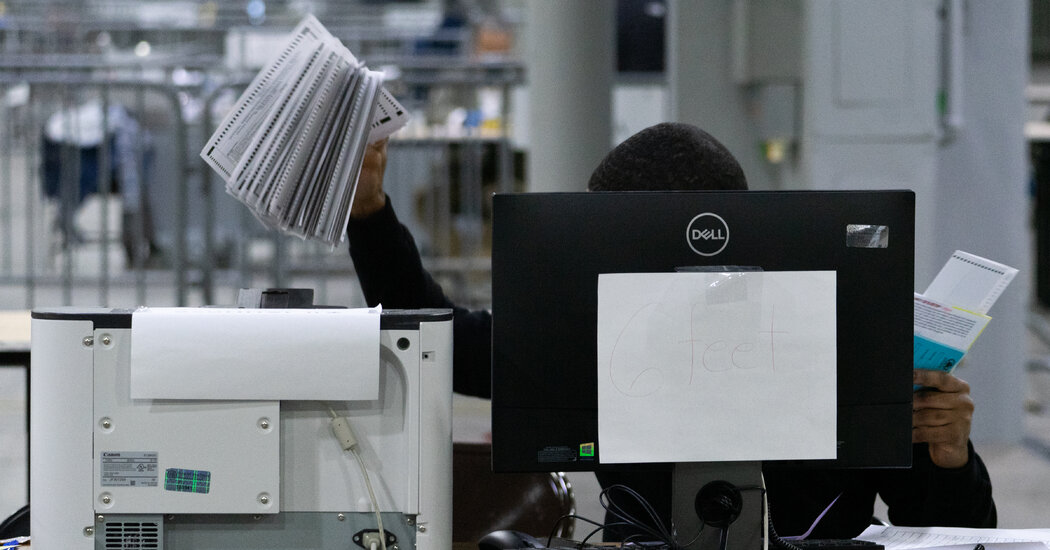 The elections office in Georgia’s heavily Democratic Fulton County said on Monday that two workers had been fired for shredding voter registration forms, most likely adding fuel to a Republican-led investigation of the office that critics call politically motivated.

The workers, at the Fulton County Board of Elections, were dismissed on Friday after other employees saw them destroying registration forms awaiting processing before local elections in November, the county elections director, Richard Barron, said.

Both the county district attorney and Secretary of State Brad Raffensperger, the state’s chief elections official, were asked to conduct inquiries into the matter, the chairman of the Fulton County Commission, Robb Pitts, said in a statement.

But it was Mr. Raffensperger who first revealed the allegations of shredded registration forms, issuing a blistering news release demanding that the Justice Department investigate “incompetence and malfeasance” in the agency. “After 20 years of documented failure in Fulton County elections, Georgians are tired of waiting to see what the next embarrassing revelation will be,” he said.

His declaration only underscored the political implications of the document-shredding charges, which would almost certainly have been less freighted in any other election office. Fulton County officials did not say how many forms were shredded, but Mr. Raffensperger put the total at about 300 in a county with 800,000 voters on the rolls.

While the charges of wrongdoing surfaced on Friday, it was unclear when the actual destruction of registration forms might have occurred.

Mr. Raffensperger, who won national attention for rejecting former President Donald J. Trump’s request to “find” enough ballots to overturn President Biden’s narrow win in the state, faces a difficult primary race next spring against a rival endorsed by Mr. Trump. The Fulton County elections office, meanwhile, has become the object of fury by Trump supporters who baselessly claim that Mr. Biden’s win in the state was illegitimate.

Some supporters are suing to conduct yet another review of the presidential vote in Fulton County, which includes a broad swath of metropolitan Atlanta and where 73 percent of voters favored Mr. Biden. The statewide Georgia vote has been counted three times with zero evidence of fraud.

The Republican-dominated State Legislature approved legislation this spring that gives it effective control of the State Election Board, and empowers the board to investigate legislators’ complaints about local election bodies. Fulton County was quickly selected for an inquiry that eventually could replace the elections board with a temporary superintendent who would have sweeping powers to oversee the vote.

Voting rights advocates and Democrats statewide have cast the inquiry as a first step toward a pro-Trump takeover of election machinery in the county most crucial to Democratic hopes in future elections.

“I don’t think there’s another state in the union that has a State Election Board with the power to turn a nonpartisan elections office into a partisan arm of the secretary of state’s office,” Mr. Barron, the Fulton County elections director, told The Atlanta Journal-Constitution.

The county’s performance in elections has been mixed. Primary elections last year were plagued by long lines, and county elections have long been the subject of complaints. A report by a state-appointed monitor concluded that elections there were “sloppy” but it found no evidence of “dishonesty, fraud or intentional malfeasance.”

The elections board has cited recent improvements, such as revised training manuals and newly hired election managers, as evidence that it is addressing complaints. But the disclosure on Monday gives critics new ammunition at a time when the coming November election, for Atlanta’s mayor and City Council, is being seen as a test of the board’s competence.

Mary Norwood, a Fulton resident who narrowly lost two races for Atlanta mayor, has been a longstanding critic of the board. She said she favored an inquiry into the shredding allegations.

“If you have two employees who are terminated by the elections director, that certainly prompts an investigation and analysis,” she said. “It’s critical that we get this right.”