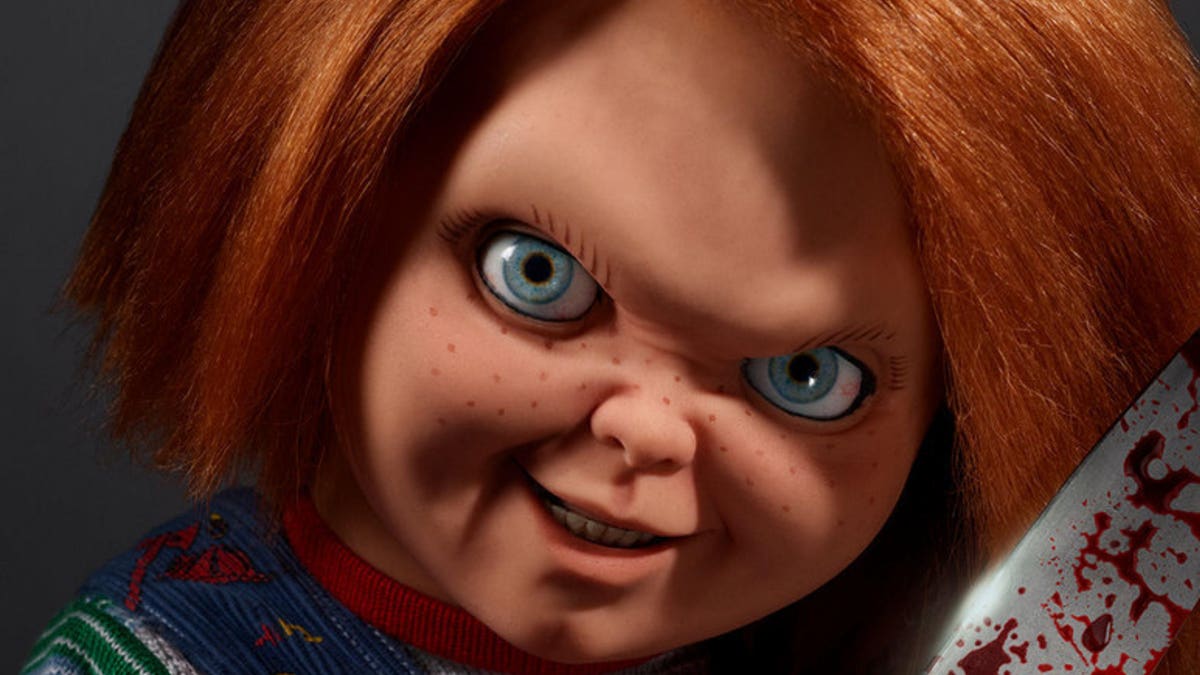 Chucky is back, and creator and director Don Mancini slays it.

Picking up where the original film series left off, the eight-episode TV show debuts on the USA and Syfy networks. A vintage Chucky doll turns up at a yard sale in the suburbs, and before you know it, chaos reigns, and blood flows in the idyllic small town. Cue the arrival of enemies and allies from Chucky‘s past. Brad Dourif returns as the voice of Charles Lee “Chucky” Ray, and the ensemble cast includes Devon Sawa and franchise stalwart Jennifer Tilly. Mancini wrote the entire season, directed the first episode, and acted as showrunner.

I caught up with him to talk about the series, how he pitched it, his fear that the Child’s Play movie reboot might have killed the franchise, and his dream of Chucky having his own maze at Universal Studios’ Halloween Horror Nights in Los Angeles and Orlando.

Simon Thompson: First of all, congratulations. Chucky surpassed my expectations. I am curious about how many concepts you went through and discarded before you landed on this one?

Don Mancini: Firstly, that’s fantastic to hear.  As far as concepts go, there was just one, honestly. I started seriously thinking about doing it, it was around the time I was working on Hannibal, and I briefly considered that you could do the show two different ways. You could do something serialized, which we ended up doing, or you could do something anthological on an episodic basis like Tales from the Crypt with Chucky hosting, and you could call it Chucky’s Bedtime Stories or whatever. I thought that would have been obvious. I felt the idea of plugging Chucky into a specific television sub-genre, as we’ve been doing in the film world where we’ve utilized different sub-genres; I thought that was the most exciting and original thing to do. I thought about plugging Chucky into a kind of nighttime soap format. I actually pitched it as Chucky meets Big Little Lies. I thought it’d be interesting to see Chucky in a small town with families who have secrets, and there are these hypocrisies and legends. The idea of Chucky being the instigator, peeling all of that back to reveal the various monsters that live in the houses that look beautiful from the outside, would be fun.

Thompson: Have you shelved the anthology idea, or have you dismissed it entirely? Could we still see it one day?

Mancini: I think that’s the thing with Chucky. We’ve found out that he’s such a versatile character, and we can use him in horror, we can use him in comedy, and we can use him in combinations thereof. It’s about finding the absolutely perfect balance between horror, naturalism, comedy, and camp, but you can’t please everybody. I feel like the various films represent different combinations of these flavors, and the TV show is a new version of that. Notably, once Jennifer Tilly comes in on episode five, you bring a new, different humor element into it. My intention always is it should be like Reese’s Peanut Butter Cups in that these are two great flavors that taste great together, and it’s really just about finding the right balance.

Thompson: Did you toy with the idea of not bringing in familiar faces and voices?

Mancini: Not really. I’d done Hannibal, and then shortly after, I did Channel Zero and Cult of Chucky. Both Hannibal and Channel Zero were shows that told a continuous story over the course of the season. That’s what I wanted to do with this character. I set it all up at the end of Cult of Chucky. I deliberately ended that movie leaving all of the major characters at a cliffhanger like The Empire Strikes Back. I did it with the hope of moving forward on a TV show, and somehow it worked out.

Thompson: Has this opened up the opportunity for more Chucky movies? The response from people to the fact this show exists at all has been incredible. The reboot wasn’t very good and didn’t go down well at the box office, and I was genuinely worried it would kill Chucky‘s future.

Mancini: I worried about that too, we all did, but fortunately, that didn’t happen. The television show, fingers crossed, we’ll continue onward, but we don’t know yet. It would certainly not preclude more movies. We have plans for more. One of the things I’ve wanted to do over the last five years is to start to build a denser Chucky multiverse over a different kind of media. We have various plans percolating on different burners, so there will be more movies and more TV adventure as well as some other things that I can’t talk about.

Thompson: Chucky is airing on two networks, USA and Syfy, which is pretty rare. That feels like a massive vote of confidence.

Mancini: I think so, yeah. When I first sold the show, I didn’t know that was going to happen. It wasn’t the initial plan. When they told us it was going to be happening, it was very flattering. I hope it works out. I assume they know what they’re doing. I mean, what could go wrong? (laughs) They’re going for two distinct audiences, which I think is really clever. The marketing materials are incredible because they are tailoring them for the two distinct markets on each of the different platforms. It’s really exciting.

Thompson: I was going to ask about other possibilities because I saw you at Halloween Horror Nights at Universal Studios Hollywood on opening night and, as a fan, I was a little bit disappointed, with the show coming out, that Chucky didn’t have a presence there again this year.

Mancini: Yes! Every f***ing year, I want to do it. They’ve done it in the park in Japan. They’ve had a Chucky maze there for two years running. I think it has something to do with maybe the availability of little actors. Because Chucky is a puppet, a doll, there is a greater complication in presenting a version of him in that format in public and a maze. It’s not like you can just have a six-foot-tall actor, and you put a mask on them. They have to be little. I’m just theorizing, but I know there are plenty of really talented little actors, and I’ve worked with a lot of them in my career. They’ve got to be here in LA, and I’m sure they would love to do it. Anyway, yes, let’s push for that. I want a Chucky maze at Halloween Horror Nights.