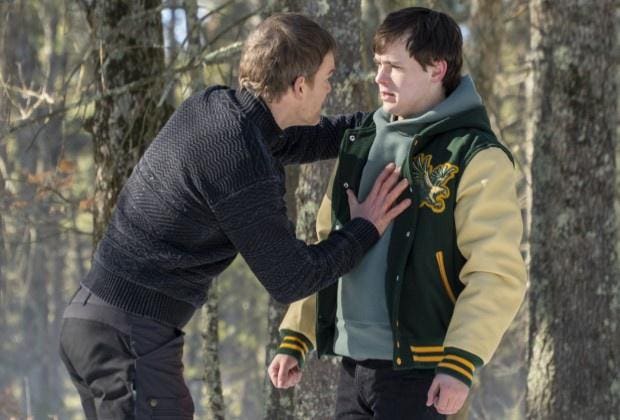 Dexter: New Blood was much more than a nostalgia-filled return to our favorite vigilante serial killer. By the time the finale’s credits rolled, we realized that this was no cash-in, however successful it’s been. This was the ending the show always deserved.

It was curious to me that New Blood’s primary antagonist, Kurt Caldwell (Clancy Brown) died in the penultimate episode of the season. Often, shows save the villain for the final episode—for the epic conclusion.

But Kurt wasn’t really the season’s chief antagonist, after all. He was certainly Dexter’s, but Dexter himself was the Big Bad this time around, and rightfully so. In many ways, he always has been. Like Walter White, we root for him even while a small voice in our head reminds us that no, this person is hurting people and needs to be stopped.

So we hoped that Harrison (Jack Alcott) would not follow in his father’s footsteps, and were a little disappointed when New Blood appeared to take the easy and predictable route. Harrison cut a kid he thought for no reason, nearly killing him while falsely claiming self-defense. Then the bone-breaking incident during the wrestling match.

Dexter convinced himself that Harrison had his very own “Dark Passenger” guiding these actions, and that the only way to save his son from a quick trip to the slammer was by coaching him the way his adoptive father taught him—to kill by way of The Code.

So they took down Kurt Caldwell together, and we wondered as we watched: Is Dexter actually right? Is Harrison truly his father’s son, destined to take over the family business?

But the clue was there, plain to see: As Dexter butchered Kurt’s lifeless body, blood flowed across the plastic tarp toward Harrison and he was visibly repulsed by it. He had to go get fresh air.

Harrison, we realize, is drawn to the idea of killing bad guys to save innocent lives. But he’s not drawn to the act of killing. Blood doesn’t excite him. Killing isn’t a turn-on. Saving innocents is something he’s okay with, but he’s not an addict like Dexter.

This starts to become increasingly obvious to us—though not to Dexter, blinded by his recent kill—as he tells Harrison that they’ll have to move from Iron Lake. Harrison wants to stay in a community that he’s finally begun to call his own, where he finally feels accepted. He has friends (sort of) and a girlfriend (again, sort of) and it’s a new start.

But Dexter wants to go. Maybe to Los Angeles. “We can’t do what we do,” he tells Harrison, in a town the size of Iron Lake. A city is much better for the vigilante/serial killing business.

And just like that, Dexter’s focus is no longer on staying clean or trying to protect his son. Ten years of muder-sobriety, down the drain thanks to Matt and Kurt Caldwell. Now all he can think about is the next kill, while Harrison just wants to live a normal life. Later, when Harrison tells him “I’m not your caretaker!” we realize just how much this is a story of addiction and neglect. The sins of the father, indeed.

Watch my video review of this episode below:

Angela Bishop (Julia Jones) brings Dexter’s plans to a halt when she arrests him in her own home the next evening. She and Logan (Alano Miller) bring him back to the station where she questions him and he gives her the run-around, trying to poke holes in her theories.

He blames everything on Kurt, but he’s not prepared for her broader accusations. He has no idea she’s made the connection between the ketamine in his victims in Iron Lake and the Bay Harbor Butcher case—a case he assumes everyone has forgotten. A case he assumes is closed.

He’s taken completely by surprise when she reveals that she’s been in touch with Angel Batista (David Zayas) and that he’s on his way to Iron Lake as they speak. This accelerates his time table considerably. (Alas, no final confrontation between Angel and Dexter takes place—a missed opportunity, perhaps, though hard to make work here).

Brief note on the Batista stuff: I think it’s fun to bring his character back to the show and he certainly plays a pivotal role, but isn’t it just a tiny bit . . . contrived? The likelihood of running into Batista when she just happens to be dating Dexter Morgan seems rather slim. But it’s not that big of a deal. One small contrivance in an otherwise excellent show.

In any case, this prompts Dexter to play his trump card. He tells Angela to go to Kurt’s cabin and gives her directions on where to find the hatch. It’s weird that she goes there all by her lonesome, given that as far as she knows Kurt is still alive, but she goes and leaves Dexter alone with Logan.

Dexter is locked up, but that doesn’t stop him. He lures Logan to the cell and gets him in a chokehold. When Logan goes for a gun instead of the keys, Dexter kills him, uttering something to the effect of “Look what you made me do.”

He calls Harrison and tells him to meet where the white deer was killed. This is also interesting, because we learn—as many suspected all along—that Harrison was actually there that morning, when Dexter killed Matt. He’s known this entire time that Dexter was keeping a very big, very dark secret. It’s a secret he never betrayed.

When Dexter shows up, Harrison is waiting. Dexter wants to go ASAP but Harrison is concerned. Who’s blood is that? And wait a second, didn’t you just call me from Logan’s phone? Did you kill coach Logan?

“It was the only way,” Dexter replies. “He wouldn’t comply.”

This is the last straw for Harrison, who realizes now just what a monster his father truly is. “Would my mom still be alive if it wasn’t for you? Aunt Debra?” he asks.

“Open your eyes and look at what you’ve done!” Harrison shouts at his father, and we see flashes of the innocent dead left in Dexter’s bloody wake. Code or no code, Dexter has always been willing to kill to get away with murder, even if the people he kills (or who die because of him) didn’t deserve it.

Finally, a reckoning. Finally, Dexter is held accountable for his sins. Finally, he doesn’t get away. Not only is he finally cuffed and booked for his crimes, he’s brought down in the end by his girlfriend and his son—two people who could have easily died because of him. Indeed, Dexter was about to try to kill Angela before Logan showed up.

In the end, Harrison lives by the code. He kills to save innocent lives from a psychopathic monster. And even though we’ve all rooted for Dexter over the years, we’d be lying to ourselves—much like the main show did toward the end of its run—if we told ourselves that Dexter was a hero.

I Should Live In Salt

The song that plays as Harrison drives out of Iron Lake is “I Should Live In Salt” by The National. I have to comment on it for two reasons. (The version in the above video is really beautiful, by the way, performed acoustically in the Gibson Showroom in Austin, TX. What I wouldn’t give to have been there).

First of all, The National is pretty much my favorite band, so hearing a song of theirs—and one that I really love—come on at the end of this show was really powerful for me.

It’s also kind of the perfect song to play at that moment. Harrison sees the letter from his dad in the passenger seat of the truck, and as he drives we hear Dexter’s voice narrating the letter, telling Harrison’s stepmom to keep his survival a secret. “Let me die, so that Harrison can live,” Dexter says, which is perhaps one of Dexter’s only true acts of love.

All season he’s had to reckon with his abandonment of his son, and as the song plays we hear its chorus: “I should live in salt for leaving you behind.” Seriously, what a great line—intended, one imagines, as a line about a breakup and ensuing regret, but perfectly apt here as well.

In this moment, Harrison finally understands that he wasn’t abandoned because his father was ashamed of him or didn’t love him, but because he was trying to protect him from Dexter’s “Dark Passenger” (who Harrison rightly observes isn’t a passenger at all).

It’s all very moving. A beautiful, bittersweet ending to a show that has always deserved a better one.

Dexter: New Blood exceeded every one of my expectations. It left behind silly plot twists and contrived confrontations. It did away with the idea that Dexter was a hero and held him accountable for his crimes. In many ways, I think this was the best season of Dexter out of them all—goofier, in some ways, but more profound and emotionally poignant as well.

And it toyed around with creative storytelling in really brilliant ways, like bringing Debra Morgan (Jennifer Carpenter) back as Dexter’s very own Jiminy Cricket.

As Dexter lays bleeding in the snow, Debra kneels beside him, holding his hand in hers. Then she pulls her hands away. Dexter dies.