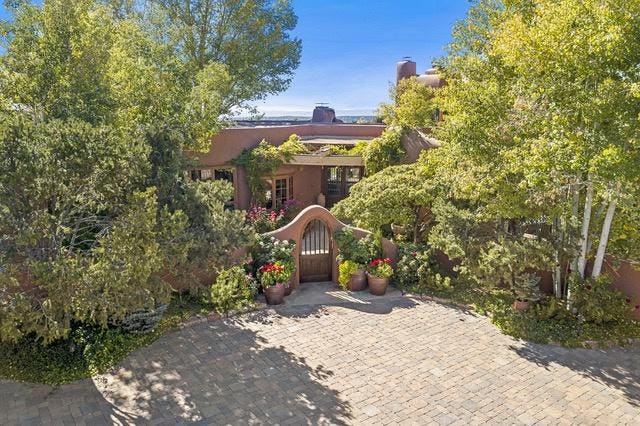 Few American entertainment figures have the stature of Carol Burnett. She has been nominated for countless Emmys, Golden Globes, Tonys and Grammys, winning her share of all of them. She has received the country’s highest accolades, including a Kennedy Center Honor, the Presidential Medal of Freedom, the Mark Twain Prize for American Humor and, in 2019, she became the first recipient of the Carol Burnett Lifetime Achievement Award for Television, which was named in her honor.

Yet, for all her success and adulation, she remains a beloved comedienne dear to the hearts of Americans who revere her unpretentious, warmhearted sketches and her memorable characters. With a rags-to-riches story that includes considerable suffering, her delightful, self-effacing personality has become iconic.

In 1995, Burnett built a home in the Pueblo Revival style in Santa Fe, the well-loved New Mexico city that could be a municipal parallel to her well-loved Hollywood persona. That house, on over eight acres on coveted Circle Drive, is now on the market for $5.2 Million. It was originally listed in June of 2021 for $6.2 Million.

The compound includes the over 7,500 square-foot, three-bedroom main house, a two-bedroom gatehouse, a two-bedroom casita, a three-car garage as well as a magnificent swimming pool with cabana. A walled and gated property, it has lush landscaping, incredible outdoor entertaining areas and the views that help make Santa Fe special. Most of the main-floor public rooms have an open floor plan. Other architectural and design details include plaster walls, flagstone and hardwood floors, beamed ceilings, circular columns and stained glass windows. The kitchen has custom cabinets, a key-shaped island, a copper sink and a breakfast nook. The primary bedroom suite is exceptionally spacious and includes a fireplace, built-in seating by a large window, dual bathrooms and walk-in closets. Topping it all off is a rooftop deck that offers stunning mountain views.

Carol Burnett’s Santa Fe home was featured in the December 1996 issue of Architectural Digest, where the cover photo shows a grinning Ms. Burnett reclining on the mantel above the massive fireplace.