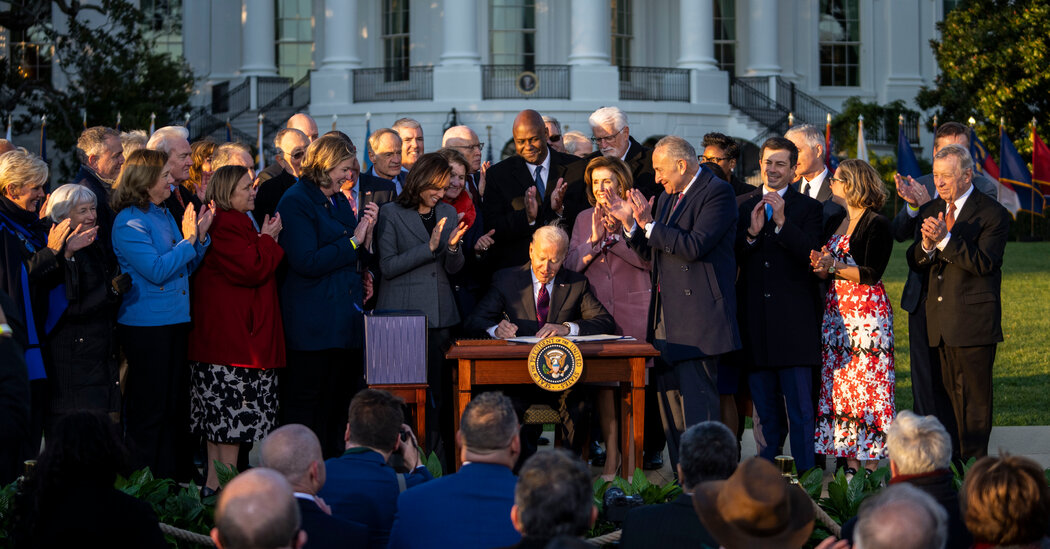 Then he will head to a General Motors plant in Detroit on Wednesday, to highlight funding aimed at building as many as 500,000 electric vehicle charging stations and improving the nation’s electric grids. The spending on electric vehicles in the bill is much lower than Mr. Biden initially proposed, but administration officials say it will accelerate a shift to lower-emission cars and trucks.

“With the combination of this investment and where we know the industry is going,” said Brian Deese, who heads Mr. Biden’s National Economic Council, “we believe this will be the beginning of a real transformation in our vehicle infrastructure.”

The legislation was the product of intense negotiations spanning much of the first year of Mr. Biden’s presidency, and of the back-slapping, coalition-building politics the president has relished in a government career stretching back to the 1970s. Mr. Biden brokered agreements first with Senate Republicans, 18 of whom ultimately voted for the bill, and then with progressive Democrats in the House, who held up its final passage in order to raise pressure on centrists in Mr. Biden’s party to support the larger spending bill.

As Mr. Biden and other speakers noted on Monday, previous presidents had tried and failed to broker big-spending infrastructure deals. Under President Donald J. Trump, “infrastructure week” became a running joke, as administration officials frequently promised to focus on the issue only to be derailed by a rolling series of scandals. Mr. Trump’s team never made a serious push for an infrastructure bill in Congress, choosing instead to focus on a large tax cut that passed in 2017.

Senator Rob Portman, an Ohio Republican who led his party’s side in the infrastructure talks, credited Mr. Trump on Monday for elevating the issue among Republicans. Mr. Biden made no mention of that, instead using the moment to talk about how Washington can overcome partisan wrangling when there is agreement on policy.

While the package is smaller than what Mr. Biden originally proposed, about $550 billion of the bill represents an increase over current spending levels. Researchers at the Brookings Institution estimate that the money will increase federal infrastructure spending as a share of the economy by half over the next five years, putting it nearly on par with the infrastructure provisions of the New Deal under President Franklin D. Roosevelt. If Mr. Biden’s $1.85 trillion spending bill — which includes more money to combat climate change — also passes, they estimate the increased infrastructure spending will eclipse the New Deal.

That increase will challenge the government’s ability to spend money on time and effectively. On Sunday, Mr. Biden appointed Mitch Landrieu, the former mayor of New Orleans, to oversee implementation of the infrastructure bill.