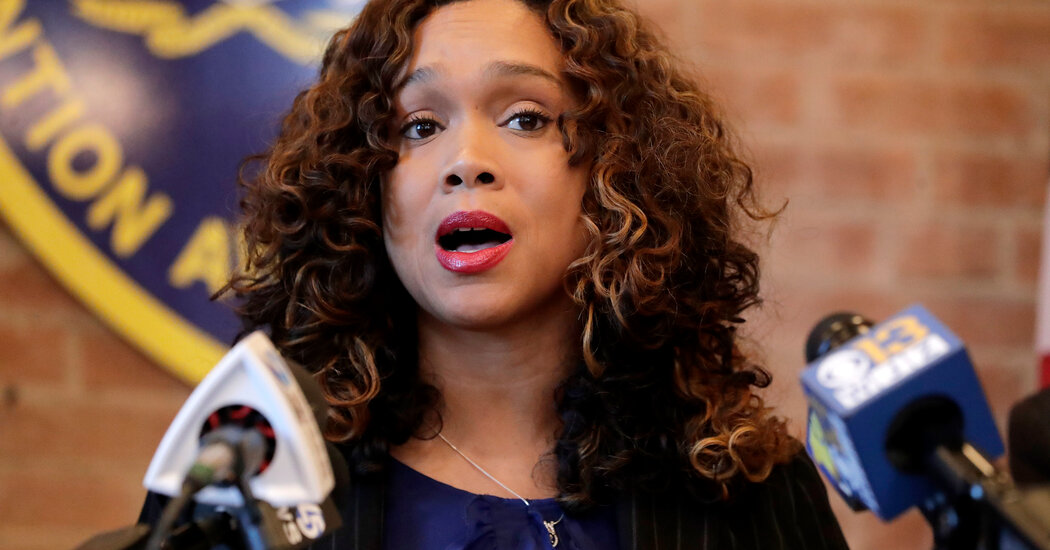 Marilyn Mosby, Baltimore’s top prosecutor, was indicted Thursday on charges that she perjured herself to obtain money from a retirement fund and made false statements on loan applications to buy two vacation homes in Florida.

The charges against Ms. Mosby, 41, who was first elected state’s attorney in 2014 and drew national attention the following year for her handling of the death of Freddie Gray, a 25-year-old Black man who died in police custody, came after a monthslong investigation by federal authorities.

Ms. Mosby filed two requests in 2020 to withdraw about $90,000 from her city retirement account, according to the U.S. Attorney’s Office in Maryland.

She faces two counts of perjury for those requests, which were made through the CARES Act, because she claimed that the pandemic had caused her financial difficulties. But at the time, she was fully employed and making almost $250,000 a year, according to the indictment.

“Rather than experiencing a reduction in income in 2020, Mosby’s gross salary in 2020 increased,” the indictment said, noting that she had received a raise of nearly $10,000 from the year before.

Ms. Mosby used the money she had withdrawn for down payments on the homes, according to the indictment. She did not disclose on her mortgage applications that she owed more than $45,000 in taxes to the Internal Revenue Service. In March 2020, the I.R.S. placed a lien on all the properties belonging to Ms. Mosby. The lien also applied to her husband, Nick Mosby, president of the Baltimore City Council. He is not charged in the case.

Prosecutors said that Ms. Mosby also did not reveal her tax troubles in an agreement she had signed with a management company to rent out one of the vacation homes. That way, they said, she could obtain a lower interest rate on her mortgage.

The mortgages amounted to more than $900,000 for both homes — which were in Kissimmee and Longboat Key — according to the indictment. She was listed as the sole owner of both homes. In November, she sold the Kissimmee property, an eight-bedroom home, according to property records.

If convicted, Ms. Mosby would face a maximum sentence of five years in prison on each of the perjury counts and 30 years on each of the charges of making false loan applications.

A. Scott Bolden, Ms. Mosby’s lawyer, vigorously denied the charges against his client and labeled them “bogus.”

In an interview on Thursday night, he said that the investigation was part of a “historical attack on Black female prosecutors.” Ms. Mosby had no plans to step down from her position, he added.

Mr. Mosby did not respond to emails on Thursday night.

When Ms. Mosby became state’s attorney for Baltimore City in 2015, she was 34 years old, the youngest top prosecutor of any major American city.

Three months into her term, Freddie Gray died in police custody after sustaining a spinal cord injury. Video footage showed officers carrying his limp body into a police van. His death fueled protests against excessive force and amplified awareness of police killings of Black people. Riots broke out, and police cars were set on fire. The city was placed under curfew.

Two weeks after Mr. Gray’s death, Ms. Mosby announced she would prosecute six officers. They were charged with crimes including manslaughter and murder. This decision was contested, with critics stating that she moved too hastily in what was inevitably an uphill battle.

Three officers were acquitted by a judge, who said there was insufficient evidence. Then, Ms. Mosby dropped remaining charges against three police officers, another divisive decision.

Still, in 2018, Ms. Mosby handily won another four-year term, which expires this year. At least two candidates have announced they will challenge her in this summer’s Democratic primary. They expressed concern on social media on Thursday about Ms. Mosby’s alleged actions.

Ms. Mosby and Gov. Larry Hogan of Maryland have repeatedly clashed over the proper approach to addressing violence in Baltimore.

In a Fox News appearance last month, Mr. Hogan blamed Ms. Mosby and her refusal to prosecute violent crime as a “big part of the problem” of escalating violence. Ms. Mosby responded with an open letter accusing Mr. Hogan of issuing “incessant dog-whistling attacks about Baltimore crime” and stoking fears to “score political points with your conservative base.”