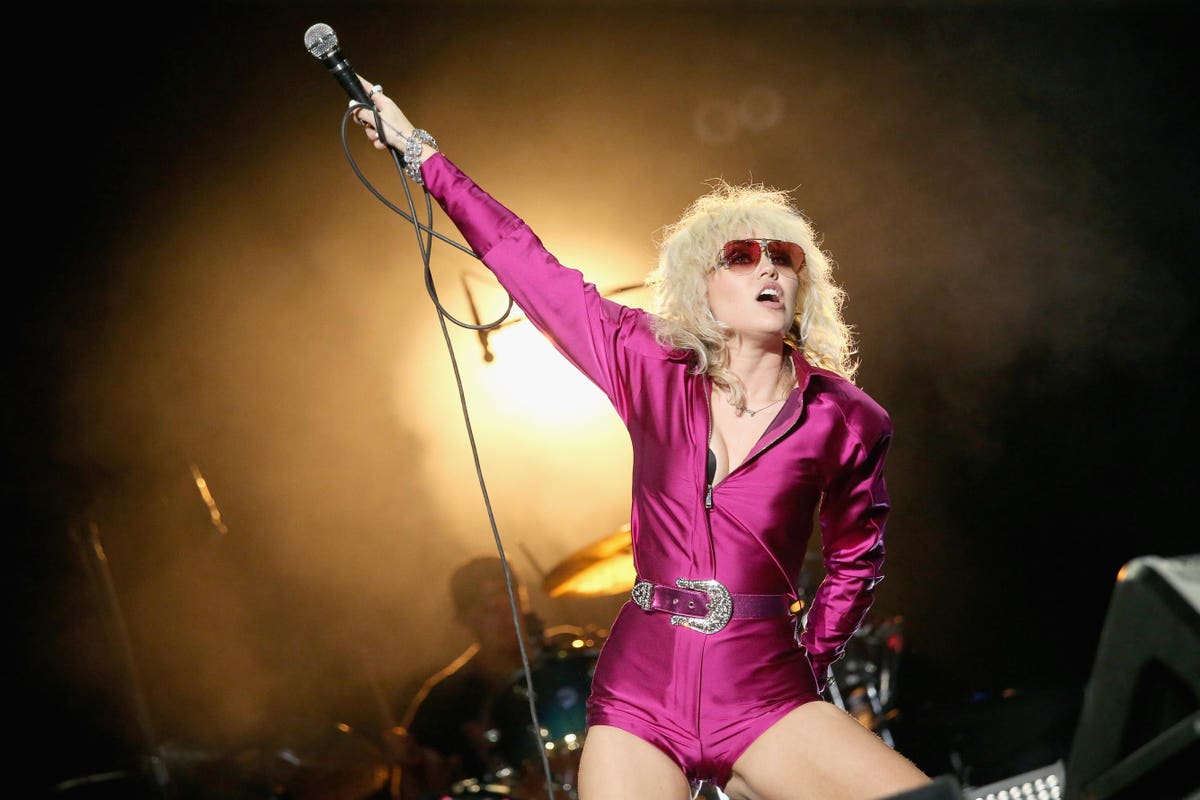 Austin City Limits got off to an inauspicious start on Friday when rain delayed the start of the festival from noon to 3 p.m., but it ended on a literal high note with a dazzling, hit-filled performance from Miley Cyrus.

The 28-year-old superstar stormed through a genre-spanning, 80-minute set full of fireworks, motivational speeches and appropriately outlandish visuals, including cartoon skeletons having sex on motorcycles during “Malibu.” More importantly, Cyrus’ set contained at least half a dozen of the most enduring pop songs of the past 15 years, which she performed with the studied dynamism of an entertainer who’s spent half her life on the world’s biggest stages.

Cyrus’ set got off to a roaring start with a riff-heavy revamp of her 2013 Bangerz smash “We Can’t Stop,” which she punctuated with bits of the Pixies’ “Where Is My Mind?” It was the first of several rock throwback nods, along with her now-beloved rendition of Blondie’s “Heart of Glass” and a cover of the Chantels’ “Maybe” in the style of Janis Joplin. In those moments, Cyrus achieved authentic stadium rock grandeur, proving she has the presence and, more importantly, the powerhouse vocals to hang with such rock and roll heavyweights.

If the first half of Cyrus’ set sagged slightly under the weight of a few clunkers from Bangerz and Miley Cyrus and Her Dead Petz, she made up for it in the second half by unleashing a torrent of early-career hits that work remarkably well in this new retro-rock context. The transition from Cher’s “Bang Bang (My Baby Shot Me Down)” into “See You Again” was genuinely inspired, and “Can’t Be Tamed” crackled with sleazy glam-rock swagger. “The Climb” received an almost worshipful audience response, and “Wrecking Ball” got retooled into an earth-shaking power ballad and intercut with another masterful cover of Prince’s “Nothing Compares 2 U.”

It didn’t matter that Cyrus’ in-ear monitors appeared to malfunction as she soldiered through her requisite set closer “Party in the U.S.A.” She had already given the crowd everything they wanted and more, and when she let the masses take the lead singing the anthem that helped soundtrack their adolescence, they happily obliged.

The singer also found time to wax philosophical between songs, marveling at the fact that the extinction of a small number of insect species would devastate all of nature’s ecosystems. “Just because you feel small doesn’t mean that you’re not making a f***ing big impact on this planet,” she told the audience, encouraging everybody in attendance to be like a moth because “they truly don’t give a f**k what anyone thinks.”

Cyrus had already appeared on the Honda Stage earlier that afternoon when she crashed Megan Thee Stallion’s high-octane, 60-minute set, which demonstrated what a staggering amount of hits she’s scored over the past year and a half. Thrilled to be back in her home state, the Houston native barreled through super-hits and fan favorites like “Body,” “Hot Girl Summer,” “Big Ole Freak,” “Savage” and, of course, “WAP.” She saluted the hot girls in the crowd and brought several fans onstage to dance, take selfies and generally lose their minds with her. She also reminded the crowd that Hot Girl Summer is a year-round phenomenon and thanked them by saying, “Without the motherf***in’ hotties, there would be no hot girl coach.”

While many fans stayed rooted at the Honda Stage between Megan Thee Stallion and Cyrus’ sets, those who ventured toward the cozy BMI Stage in the interim were treated to a thunderous performance by Los Angeles rock quartet Bexley. Frontwoman Amanda Hardy alternated between a haunting mid-range croon and raspy, Robert Plant-esque shrieks atop sludgy, down-tuned riffs ripped straight from side two of Soundgarden’s Superunknown. Unlike several early-afternoon acts who got their sets canceled, Bexley’s got pushed from 1:45 p.m. to 7 p.m., and the band seized the opportunity to serve up a white-knuckle rock show to a captive audience.

“You guys are literally making my dream come true,” an incredulous Hardy told the audience as they roared with approval after one song. In that moment, Bexley reminded concertgoers of the joy of discovery at a music festival and proved they’ve got the mettle to dominate a main stage once they build a big enough fanbase. It was a portent of great things to come — both for Bexley, whose eponymous debut LP comes out next Friday, and for the next two days of this year’s ACL Fest.