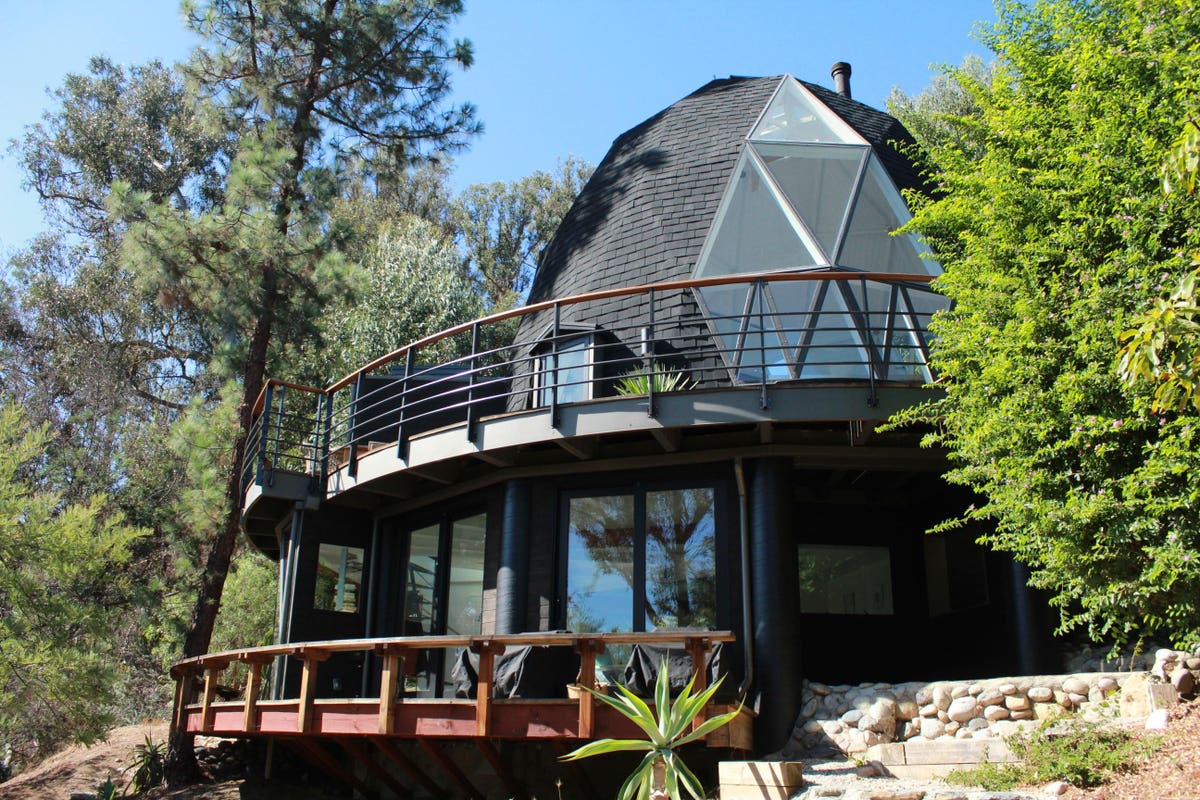 When Fouquet, 38, bought the property for $950,000 in November 2016, he was looking for a place with high ceilings that would allow space for airflow, energy and creativity.

“I wanted a place where I could think and create,” Fouquet says.

The hatmaker earned a degree in environmental science but decided to embrace his creative side, making hats in his basement garage and opening his first store in Venice in 2014. Today, Fouquet — who counts David Beckham, Madonna, Jennifer Lopez, Pharrell Williams and Tom Brady as some of his celebrity clients — has stores in Venice and Aspen. Buying a home close to his flagship store was a plus. But restoring the dome, the guest house, the pool and the gardens took time and patience.

Initially, Fouquet thought the home was a Buckminster Fuller-inspired geodesic kit home. Fuller, an American architect, writer and inventor, patented the design for the geodesic dome form in 1954. By the 1960s and 1970s, Fuller’s domes had caught on with hippies, communes and homeowners looking to embrace the nontraditional. Customers bought geodesic dome homes that arrived as kits.

After a story on Fouquet’s dome home was published in 2017, the daughter of the original builders tracked him down and shared the home’s true origin story.

“I’m flying back from New York. I land and see an email from Vanya Goldberg, the daughter of the original owners, a couple of biodynamic farmers, saying that her family built my geodesic dome home in the 1970s,” he says.

Saltzman, who lives in the Sudden Valley neighborhood of Bellingham, Wash., says the couple paid $44,000 for one house on about 2 acres of land. The property was later divided into two legal lots. They spent $100,000 and two years creating the pool, the gardens and the geodesic dome home crafted with custom furniture, concrete columns and wood and glass triangular shaped panels.

“I guess we were semi-hippies or a bit new-age. It was so long ago, and I’m so far removed from that now. But Topanga Canyon has this kind of ambiance. We had seen some domes and were intrigued by them, so we decided to build one for ourselves,” Saltzman says.

Over the years, the family home served as a school and a goat and chicken farm. Vanya Goldberg learned to swim in the pool. But the couple divorced in the 1980s and sold both properties, including the one with the dome. In the care of the second owner, a lawyer, who eventually died, the geodesic property fell into disrepair. That is where Fouquet’s history with the Topanga Canyon property started.

“When I realized it was not a kit home, I knew this place was really rare. These people, this family, they were ahead of their time, brilliant and forward-thinking. It’s a handmade home, very unique,” Fouquet says.

Unearthing his Topanga treasure was not easy. Fouquet needed assistance. Support arrived. Nick’s sister Gigi helped recreate the interiors. And Timothy McCarthy of Forma Design Group, who has been designing, building and renovating residential and commercial structures since the 1980s, mentored Fouquet throughout the project.

First, McCarthy says they needed to create a living space for Fouquet. “The place was borderline uninhabitable when Nick bought it. And there was no parking infrastructure,” McCarthy says.

“There were washing machines all over the property. When Nick took over the property, there were maybe five or six paths filled with all kinds of things, old furniture, rotting things. The previous owner buried things in the ground. There was nothing toxic, and it was just debris, so we sifted through everything and recycled what we could,” McCarthy says.

With no off-street parking and numerous contractors, McCarthy says he created a circular parking lot for about 10 cars.

Next, McCarthy completed work on the swimming pool and tore down an existing structure that became a beautiful 600-square-foot guest house with a kitchen, one bedroom and one bathroom. Fouquet lived in the guest house for the first few years as a top-to-bottom remodel on the dome and the landscape progressed. This is not traditional guest-house living, McCarthy says.

“It’s the kind of guest house that I think most people would want to live in as a home. It’s pretty special,” McCarthy explains.

The team transitioned to the dome in 2018. “The dome was the last thing we worked on,” McCarthy says.

McCarthy removed the heavy wood and a series of walls. “We removed all of those walls and opened up the dome and brought in light, gaining volume inside the internal dome. The volume and the light encourages Nick’s creativity. We opened it up. So you get the full expression of Buckminster Fuller’s intent, which is to feel and appreciate and really experience the interior space,” McCarthy says.

“I’ve told Nick and others that if you are someone who can’t find peace on this property, you aren’t going to be able to find peace anywhere. It literally has everything you could want in a home. It has the dome, the deer, the views, the breeze and the tranquility,” McCarthy says.

Located on a peninsula on about an acre, the 1,800-square foot dome home, constructed with triangular-shaped wood and windows, features stunning views, two bedrooms, three stories and two wraparound decks. The home has a 900-square-foot primary suite with a bathroom and a walk-in closet on the lower level. The main level, where you enter the home, features a bathroom, an open kitchen, a sitting area, and a deck leading to the back of the house. The upper story has a loft with a living room and a fireplace.

Work on the geodesic dome house was completed in October 2021. The home has custom stonework in the garden and lush landscaping.

“Tim and I decided to plant trees that would give back as well. We put everything from lemon and lime trees to fig, apple, avocado and plum trees. The grapefruit tree was already there,” he says.

Today, the home is estimated to be worth about $2.5 million. For Fouquet, his Topanga Canyon geodesic beauty is priceless.

While Saltzman plans to visit at some point, Vanya Goldberg toured the house in February 2020 and is delighted with Fouquet’s vision.

“I went and visited the house and met Tim and Nick. We spent several hours talking and touring the house, which was mid-construction. We’ve stayed in touch. It’s been very powerful for everyone involved with the home to have the creation story and learn more about the house,” she explains.

Fouquet admits he had a few moments of buyer’s remorse in the early stages of the remodel, but he is glad he stuck with it. They all came to love and embrace the project from the architects and general contractors and subcontractors, he says.

“Even my lighting guy would come on the weekend because he was so excited about the project. He took his time to have the perfect lighting sequence to radiate out from the geodome. It made me appreciate everyone that came in to help. But when I came on the land, I was like, ‘This land feels special.’ It’s perched on this special place where you have a view of the south side of the canyon and the north side of the canyon. And it’s been cool to see the reaction of people coming in because we’re so programmed to see structures that are all 90-degree angles. So when you walk into a circular home of this size, it takes a minute for it to hit you. I like to experience people looking at the home,” Fouquet says.

“It was a long process because this place needed a lot of attention. And we needed specially-skilled workers to create custom furniture. It’s a dome, you know? No one furniture manufacturer creates pieces for geodesic dome homes; there’s not a market for it. You can’t just go to Ikea or any furniture store. All these things needed to be taken into account. This added another level of complexity that we had to sort through continuously. But looking back now, it was an immense amount of work but a labor of love,” he says.

“Vanya [Goldberg] and the family were so happy to hear that I had restored this hidden gem. But I just felt this intuitive need to bring this home back to life. And I think in many ways, that is what I do; whether it’s with the headwear that I create or branding or finding a home; I like to try to create beauty or things that are original,” he adds.

“I am not sure I saw it like this early on, but I have great concern for the home and Topanga Canyon. The area is so valued for geography and being out in nature. In hindsight,” Fouquet says, “I feel so blessed to be in the middle of Los Angeles and a national park 8 minutes from the ocean. It’s my sanctuary.”