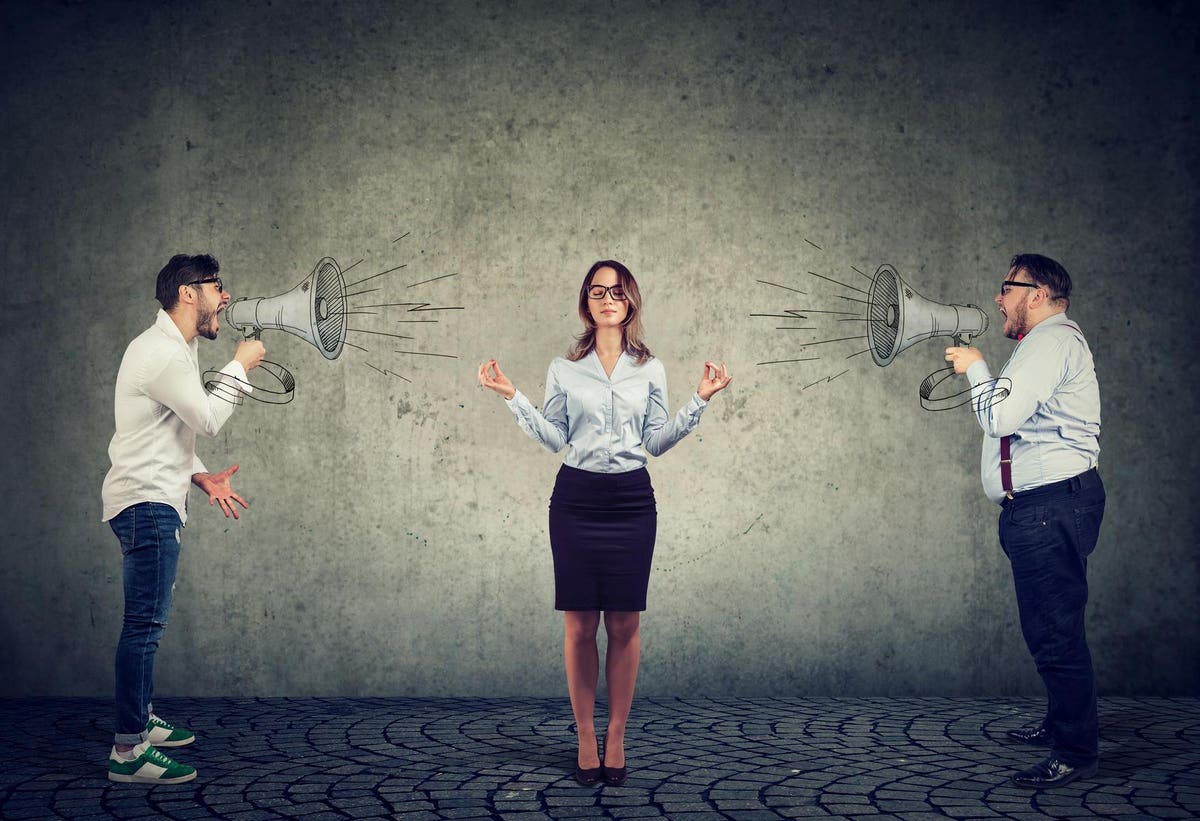 Here are some examples of what aggressive behavior may look like:

Some people struggle to stand up for themselves or actively avoid confrontation. As such, they let aggressive behavior and comments go unchecked with the belief that it’ll eventually stop. The reality is, the behavior will only get worse as the aggressor has now labeled the individual a silent target. Thus, their behavior will eventually chip away at your confidence and make you dread coming to work. However, when you stand up for yourself, you’re telling your aggressor that you command respect and won’t tolerate their aggressive behavior.

Here are three ways to best handle aggressive people in the workplace.

React To Aggression With Assertiveness

One of the biggest misconceptions is that aggressiveness and assertiveness are the same. The key differences are the tone of voice, the words communicated, and the body language used. Assertiveness is about firmly expressing your rights and needs in a respectful and professional way whereas aggressiveness is

The key to being assertive is to remain calm, firm, and appear confident. The worst thing you can do is respond to aggression with aggression. This doesn’t end well for anyone involved and only escalates the situation. Likewise, you may lose credibility when reporting the situation.

Some statements you can use to call out inappropriate and aggressive behavior are:

It’s important to remain professional and calm when communicating any of the above phrases. If you need to, take a breath to avoid responding with emotions and defensiveness. This helps you stick to the facts. In addition, when addressing aggressive behavior in real-time make sure not to attack them with a list of their past behaviors.

If you’re the type of person to freeze when encountering aggressive behavior, you can reach out to the individual privately to let them know that what they did was not okay and ask them how you can work together effectively. For example, you can say something like, “you interrupt me every time I speak during our morning standup. Do you have a problem with me or is there something we need to talk about so we can work more effectively together?”

Whether you’ve just started at the company or have been there a while, you should seek out allies. By creating alliances with your teammates or other colleagues you know you have individuals who will advocate and support you. If needed, these alliances can provide witness statements to HR. Elice Max, co-owner of EMUCoupon, said, “having someone take a stand with you will help build your case. It would also make the aggressive person reconsider their behavior as they would feel the tide turning against them.” She added, “it’s important to have a support system in the workplace to feel more empowered and less isolated while dealing with aggressive men.” Moreover, they can reassure you that you’re not being overly sensitive.

If the aggressor isn’t your manager, you’ll want to reach out to your manager for advice on how to best handle this. Not only does this make your manager aware of what’s going on, but it gives them an opportunity to intervene and shut down any disrespectful and inappropriate behavior.

Document And Know Your Rights

Another strategy is to document all aggressive and disrespectful behavior. Not only does this create a record of events (dates, times, and a detailed account of all instances including any witnesses) but it provides evidence of a repeated pattern of behavior to your manager and HR. Additionally, it leaves the emotions out of it and focuses on the facts. Approaching HR with evidence of increasingly inappropriate and unacceptable behavior demonstrates that this isn’t a mild complaint.

There’s always the risk that HR or your boss brushes you off and doesn’t take your complaint seriously. Should this occur, you do have a few options such as

Too many people suffer in silence due to workplace mistreatment. Consequently, they delay making a report because they’re scared of the consequences. Without question, report the incident immediately. There are restrictions on the maximum timeframe from the incident until it’s reported. You never know who else the aggressor is targeting. Your report can make a difference. If your workplace doesn’t take your report seriously, it’s time to seek out other options as listed above and start looking for a workplace that’s committed to creating a safe working environment.