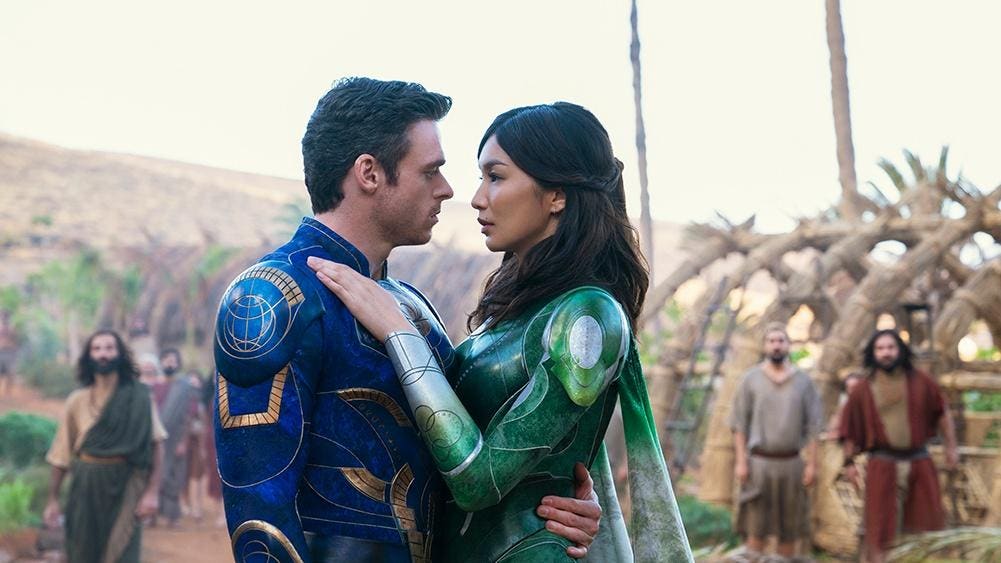 This week, I’ve been covering the fact that despite Marvel’s Eternals having an A-list cast and Oscar-winning director, it’s been reviewing as the lowest scored MCU movie in history. It’s 26th out of 26 films, and a full 15% lower than previous last place, Thor: The Dark World, with its first-ever Rotten 51% score for an MCU film, joining only TV projects like Iron Fist and Inhumans in the Rotten category.

After seeing the film, all two hours and thirty seven minutes of it last night, I have to say, the critics missed on this one.

Eternals is good. Perhaps not a top MCU production of all time, but I’d easily put it in the top half of all the movies released so far, and nowhere close to being far and away the worst MCU film, the way these aggregated ratings suggest.

Critics, despite what fans may think, generally like MCU movies, which should be obvious by 11 of them scoring above a 90% and Eternals being the first Rotten score ever. But this time, I don’t think they got it right. And it seems audiences disagree with them as well.

Eternals currently has an 86% audience score compared to the 51% critic score, far and away the largest gap in that direction in the MCU history. Normally critic and audience scores are no more than 3-7% apart, one way or the other. The lone, major exception is Captain Marvel, which broke the other way, 79% to 45%, where that film was review bombed mainly because of a fanboy war being waged against Brie Larson, and it caused Rotten Tomatoes to implement a “verified” system for user reviews, where you have to prove you saw the movie to rate it.

The split in the Eternals scores breaks the narrative of “critics will always give bonus points to ‘woke’ movies,” or “fans will bomb movies with progressive values.” Eternals has the most diverse case of any Marvel movie, is directed by an Asian woman, features a deaf hero and a gay hero who kisses his husband onscreen. Even though I wouldn’t say the movie boasts any sort of agenda other than these people simply…existing, there is no pass given to the movie by critics, nor targeted hate campaign by fans. It really just does seem to be the quality of the film being debated.

As for why Eternals is better than the critics say? To me, it didn’t really feel like a Marvel movie. It isn’t shot like one, and we have Chloé Zhao to thank for that with her gorgeous, sweeping landscapes and more subtle use of CGI than usual. It isn’t scripted like most Marvel origin stories, as we are meeting a group of heroes for the first time, but there’s no “hero’s journey” about someone discovering/acquiring their powers. It’s a film about the interplay between immortals and the gods they serve, rather high concept compared to most Marvel films, and I think it works, especially with a number of third act turns that the film simply could not share in its marketing. But it happens to be the best part of the movie.

I will say the movie has pacing problems, particularly in its first half when it jumps through time periods and seems a bit aimless. But it comes together eventually, and while it could have cleaned up its editing and shaved some time out of those 167 minutes, my excitement for what was unfolding onscreen only increased as time went on, and it didn’t drag.

The film does a number of impressive things. I was worried the massive cast would feel overstuffed, but it never does, and each of these characters are brilliantly realized and given their individual moments to shine. My favorites include Barry Keoghan’s Druig, Kumail Nanjiani’s Kingo, perhaps the most traditionally “Marvel” role here, as comic relief, and surprisingly, Angelina Jolie’s Thena, the fractured warrior that was not at all what I was expecting from her role, and she pairs excellent with Ma Dong-seok’s Gilgamesh in a great sub-storyline.

Eternals may feel a lot different than anything the MCU has given us before. Critics say that was a wrong turn. I say it was a good call, and Chloé Zhao created something unique in a somewhat formulaic space that works in many ways, and I’d love to see her vision for a sequel. In this case, even as someone who almost always agrees with the critics on the whole, I’d go see it and make up your own mind. They missed something here.