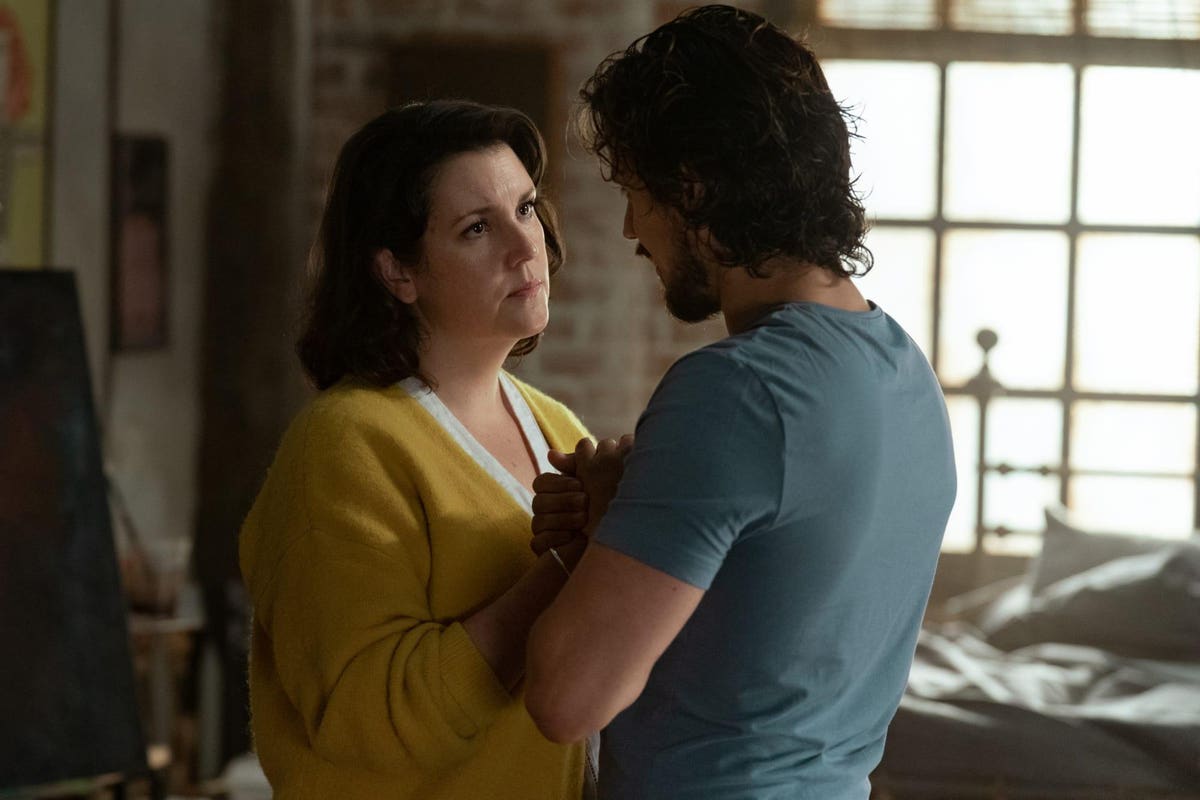 Yellowjackets is one of the best shows on TV right now. It’s mysterious, tense and terrifying. No other show does dread the way Yellowjackets does.

Dread seeps through every minute of this show, in its creepily intense music, in the little glimpses we get of the stranded teammates decked out in furs, in the hints at something Very Terrible going down, almost certainly involving cannibalism. But not just cannibalism.

There is something evil in the woods. Lottie (Courtney Eaton) saw it when they held the séance. “It”—whatever it is—wants them to “spill blood.” It also didn’t want the cabin’s original owner to leave. I think we have enough evidence at this point that Lottie’s visions are real, so whatever she senses about this forest, this place, is real. Whatever it is doesn’t want them to leave, either.

But it’s no smoke monster and we’re not burdened by the myriad storylines and hints that bogged down Lost. Here, the cast is smaller and more manageable. The mystery is palpable but actual satisfying answers seem within reach. Perhaps the show’s producers learned from Lost’s mistakes. Let’s hope so anyways.

Yes, I See A Darkness

In any case, something seems determined to keep the survivors here for winter. Last week, when teen Taissa (Jasmin Savoy Brown) led her expedition to go find help, wolves and a bout of sleepwalking (sleep-tree-climbing?) prevented them from leaving. Teen Van (Liv Hewson) was nearly killed, so badly injured that her (idiot) friends thought she was dead, and built a pyre to burn her body on.

She wakes as her legs catch fire and they barely manage to drag her off and put out the flames before she’s consumed. “Really, fire?” she asks jokingly. It’s a brief moment of comic relief before the reality of her injuries becomes clear. Now, on top of the wolf bites in her cheek, she has burns to contend with. They barely make it back to the cabin, where Teen Akilah (Keeya King) stitches up her cheek in one of the most gruesome, anxiety-creating scenes this show has offered up so far.

So wolves prevent Taissa from making her daring adventure to find help, and this leaves them in the same desperate situation as before. Winter is coming, and they’re all going to starve if they aren’t rescued first. So Laure Lee (Jane Widdop) steps up to the plate.

She’s going to fly the plane out of there and find help. She’s read the manual. She has some experience with planes. Coach Ben (Steven Krueger) is against the idea, but she’s determined and, along with her trusty teddy bear, Leonard, successfully takes off and heads out over the lake.

Here is where things go wrong, and where we’re left wondering if the plane had a mechanical failure, or if supernatural forces were at play. As she flies over the lake, her teammates cheering her on from below, the bear catches fire.

I believe this was a supernatural occurrence and not mechanical failure and I think the evidence is quite strong for this. In a small aircraft like this, the engine is in the nose of the plane. All the parts of the plane that could catch fire would be in front of Laura Lee. As far as I can tell, nothing in the seat (or below the seat) would catch on fire without something to spark it.

If the show had wanted us to think this was mechanical failure, the fire would have caught in the engine. Smoke and flame would be pouring out of the dash, out of the nose. Instead, it appears the bear itself caught fire, which then set the rest of the cabin on fire and eventually got into the gas tank. And there’s no way the bear would spontaneously combust all on its own. Something—some evil presence that doesn’t want them to leave—caused this.

While I like the idea that a mysterious force was behind Laura Lee’s death, I dislike the way the show handled the rest of it. The opening segment, with her at a Catholic summer camp diving into the shallow end and almost drowning, felt weirdly insulting to her religious beliefs. “You saved me,” she tells the lifeguard after he performs CPR.

“No,” he replies, looking up at the sky, the cross around his neck gold and glimmering, “He saved you.”

Laura Lee’s religious conviction has been handled pretty well in Yellowjackets. She can be a bit ridiculous at times, but she also leads the girl in prayer over the dead, saves Lottie from the evil spirit by smacking her with her bible, and is the only one who really takes Lottie’s visions seriously. It’s just kind of a shame to have her killed off like this. Brave, sure, but also foolish. Foolish to trust in her convictions—convictions that the show suddenly makes seem very goofy with the lifeguard incident.

Other than that, however, the episode was terrific. In the present timeline, Taissa (Tawny Cypress) and Shauna (Melanie Lynksey) connect, discussing each of their current struggles. Taissa tells Shauna that she’s been sleepwalking again, and Shauna lets her crash at her place. I’m glad Taissa has realized what’s been going on, because it really seemed like her son Sammy was a creepy kid, but he’s just traumatized by the weird stuff she does in her sleep (like destroy the doll, paint the outside of their house and blame it all on him).

Shauna, meanwhile, comes clean about her affair with Adam (Peter Gadiot). Her daughter, Callie (Sarah Desjardins) had found his ID on the ground and confronted her mom about him. Adam, we learn, has no presence online at all. He didn’t go to the art school he said he went to, and he’s just all around a super shady dude. Shauna tries to tell her daughter that he’s just into her, but it rings hollow.

Later, she discovers glitter on the carpet and realizes that he might be the one blackmailing them—and possibly the person behind Travis’s murder. But we’re still no closer to figuring out who he actually is and what he’s up to. We’ve known since the start that he was up to something. But what? And to what end?

It’s possible that he’s a grownup Javi, but why would nobody realize this? Surely if Javi survived the others would know. Nat (Juliette Lewis) would have reached out to him in her quest to find out what happened. Unless Javi survived without the others knowing. That’s a big question mark, actually. Could some of the other teens have survived without the current crop of survivors realizing?

Currently we only know of five survivors: Nat, Shauna, Taissa, Misty (Christina Ricci) and Travis (now deceased). But that doesn’t mean there weren’t others. It just means we don’t know if there were others. The appearance of the weird symbol, the post cards, the blackmail all suggest that somebody knows a lot more about what happened and who else would know that other than another survivor?

Speaking of Nat and Misty, their relationship takes a turn for the worse when Misty spots a drug dealer selling Nat cocaine via her hidden camera. She races to Nat’s rescue, bursting in on her and snorting up the powder herself to stop Nat from relapsing. Of course, this act of friendship (and Misty’s version of friendship is truly bizarre) also blows her cover. Nat realizes that she’s been spying on her this whole time. Misty, of course, doesn’t see anything wrong with this privacy invasion—she’s never been one to care about that sort of thing—and leaves in a huff.

She returns to her prisoner, Jessica (Rekha Sharma) who threatens to kill her parrot if she doesn’t set her free. Misty calls her bluff, telling her that she’ll just get a new one. But when Jessica starts to wring the bird’s neck, Misty has a full blown meltdown, visibly terrifying Jessica in the process. When the bird flies free, she shouts “I didn’t mean what I said!”

Lord Of The Yellowjackets

Teen Misty’s absence gives Coach Ben a brief respite from her clingy, creepy affections. It’s enough space for him and teen Nat (Sophie Thatcher) to have a quiet conversation in which she reveals that she knows his secret. Ben is gay—something he’s terrified of coming out (the 1990s being a much more homophobic time than the present). She asks him for some advice about Travis (who lost his nerve instead of his virginity last week) and he reassures her.

Unfortunately, Travis doesn’t have his own concerns assuaged at all. Instead, a newly hostile teen Jackie (Ella Purnell) is on a vengeance streak after reading teen Shauna’s (Sophie Nélisse) diary and discovering the truth about her boyfriend cheating on her with her best friend. This is why she announces Shauna’s pregnancy to the group and why she tells Travis that Nat slept with one of his bullies.

Jackie, it seems, would like to remedy her own virginity, and the list of candidates is pretty short. If it means breaking up Nat and Travis’s nascent romance, so be it. Jackie’s true nature is coming out now, and it’s a lot darker than we realized. I keep wondering how things go down in the winter, who leads the ring, who starts the girls on their dark path. Could it be Jackie?

Either way, this Lost meets Lord of the Flies drama remains entirely compelling, tense and provocative. The dread oozes out of every narrative pore. There are still so many mysteries to untangle. What’s up with the man with no eyes? What else has Tai done when sleepwalking? Who is behind the post cards and blackmail? What else has Misty done? Who is Adam?

Yellowjackets does a great job making us want to know more, dangling clues and misdirection in equal measure. It’s fun. It’s nothing like Westworld but I’m enjoying it for a lot of the same reasons.

What did you think of ‘Flight Of The Bumblebee’ and of the season so far? Let me know on Twitter or Facebook.